Whether he was mugging for a camera with a veal chop bone in his mouth, making documentaries that ranged from whimsical to dark, or acting with such consummate skill that film director Mike Nichols flew him out to Los Angles to audition for the title role in The Graduate, there were three constants to John Kastner’s nature: childlike wonder, compassion and an endless capacity for love.

With a fedora mashed on his head and a wicked grin, Mr. Kastner was at once a mentor, a confidante and a trickster who could, and did, convince strangers to do anything. Self-effacing and always interested in others’ stories, he was an ardent fan of actors Danny Kaye and Doris Day and of the musical Guys and Dolls, especially the song Adelaide’s Lament, an ode to the perils of waiting around, rendered in a heavy New York accent.

Most of all, Mr. Kastner was a family man who, despite offers to decamp to L.A. or Boston for work, remained in Toronto because he did not want to leave behind the people he loved – and his definition of family was generous enough to encompass those marginalized, tortured characters whose stories he told so well. People such as Sean Clifton, the main subject of his 2013 documentary NCR: Not Criminally Responsible, who in a psychotic frenzy had tried to stab a stranger to death. And Ron Cooney, the hard-bitten convict at Collins Bay Penitentiary in 1986’s The Lifer and the Lady, whose life changed when he fell in love with a prison volunteer.

“I never had a legitimate job before I met John. He put me on the path,” Mr. Cooney said. “He was such a good role model, funny and with a generous heart. And he got me to an ashram in the Laurentians and started me in my life of yoga. There was just something holistic about him.”

Mr. Kastner, who won four International Emmy Awards and numerous other honours, died at his home in Toronto’s Annex neighbourhood on Nov. 21 after a battle with glioblastoma, a virulent cancer that forms from star-shaped cells in the brain.

Peter Herrndorf first met Mr. Kastner in 1974, when the younger man came to work at the CBC weekly current affairs program, the fifth estate. At the time, Mr. Herrndorf, then the head of TV current affairs programming, was not sure what to make of the curly-haired producer, who was known for quirky work such as climbing out of a Toronto sewer in full British naval officer’s regalia and beseeching passers-by to help him free the submarine he claimed was stuck below, while he was part of a CBC program called Street Comedy.

But Mr. Kastner soon proved his worth, winning his first Emmy in 1978 for a ground-breaking documentary about breast cancer, called Four Women. (The others were for The Lifer and the Lady, 1980’s Looking Back, about young people with leukemia and Life with Murder, a 2011 NFB film about a couple’s struggle to accept their son back into the family after he was convicted of murdering his sister during a psychotic break.)

“John was a one-of-a-kind filmmaker and producer, the closest to an original that you could find,” Mr. Herrndorf said. “He was one of the few creators who could shoot films that made you laugh and then could turn around and shoot a film that made you cry. And his work was often a family enterprise, involving his sisters, his nephew and his mother, Rose, who was his researcher, his toughest critic and cheerleader.”

More than three decades later, Mr. Herrndorf nominated Mr. Kastner for a lifetime achievement award in recognition of his contribution to the art of documentary filmmaking. Presented at the 2007 Gemini Awards ceremony, the honour encompassed both serious films and more offbeat productions such as Chickens are People Too, about American chicken-rights activist Karen Davis and her battle against the poultry industry; it was bolstered by letters of support from a people whose lives he had touched in some way, including Mr. Cooney and actress and activist Shirley Douglas.

His long-time partner, Susan Teskey, said: “Johnny was crazy, wonderful, brilliant, generous, irreverent and very silly. Although he took his work and his films seriously, he never had the same expectation of himself. At heart, he was eight years old, a man who was interested in everything and could make you feel like you were the only person in the room.”

John Kastner was born on April 6, 1946, the third of Martin and Rose Kastner’s prodigiously talented four children. The left-leaning parents, who met in Canada after emigrating from Germany and Austria, ran a publishing house in Toronto and a lively household, complete with performances, political discussions and breakfasts that were called “Brecht-fasts,” after playwright Bertolt Brecht, whose work the parents had translated.

As a boy, Johnny (for that is what everyone close to Mr. Kastner called him all his life), was quiet, even a bit broody, said his older sister, Susan Kastner. Although his parents tended to roust her and his older brother, Peter Kastner, to perform Danny Kaye song-and-dance routines for guests, he was always watching and learning, willing to try harder than everyone else.

He began his career as a child actor by appearing on Wayne and Shuster segments during Hockey Night in Canada broadcasts. After graduating from Forest Hill Collegiate Institute, he started to act nearly full time; in 1969, he had the surreal experience of appearing in the first-ever Canadian film to be invited to compete in Cannes (the National Film Board’s Don’t Let the Angels Fall) while covering the festival for a now-defunct Toronto newspaper.

“Qui sont-ils?” he recalled hearing as he and the rest of the cast and crew walked the red carpet to the film’s premiere. “Who are they?”

In the end, being behind the camera, the cajoling voice, the blunt questioner and the wry, empathetic observer, seemed to appeal to him more. As a teen, he had read Fyodor Dostoevsky’s Crime and Punishment and been impressed by the writer’s ability to find incandescent qualities in even the most unsympathetic of characters. Indeed, “The Dostoevsky of Documentary” was the headline on a story that POV magazine ran about him in the summer of 2013, on the eve of the premiere of NCR: Not Criminally Responsible, at the Hot Docs film festival.

“From the time he was a little boy, he was always the best looking, and as a grown-up, he was catnip to women,” Susan Kastner said. “The first time I walked in on him at the CBC, there was my awkward little brother making women swoon, just by asking them how they were doing that day.”

Family always came first – to a point. Jamie Kastner, his nephew, now a filmmaker in his own right, recalls working with his uncle on a 1999 documentary called Somebody’s Gotta Do It, about jobs that cause pain. One day, when the schedule called for shooting two dominatrixes who wanted to get out of the business, the man they were to whip for the cameras didn’t show up and a no-nonsense Mr. Kastner drafted the younger man to take off his shirt, don a black rubber mask and play the submissive.

“This was absolutely not something I was into and after a few gentle strokes of the whip, I started fainting,” the nephew recalled. “My uncle, the consummate professional, had the crew continue rolling even as he was concerned about what was happening. As soon as he got the shot, he said ‘Cut,’ then added, ‘Oh, your mother is going to kill me’.”

Ms. Kastner laughed as she recalled the incident, noting she was told only after the fact and that her son seemed perfectly fine. “And the thing about Johnny is that, like our mother, he was mensch-like, a fixer who would not rest until he found a solution to anyone’s problem,” she continued.

“He was such a tower of strength to those kids, at once the mother, the father and the breadwinner,” the sister said. “There they were, kicking out and devastated, and he dealt with everything.”

On his first date with Ms. Teskey, a producer in her own right, when he told her he loved Doris Day, she thought the relationship would never work because she preferred Katharine Hepburn and opera. And yet, it did.

“We’re both committed filmmakers and what bound us was his absolute commitment to telling the stories of people who don’t have the power to tell their own,” she said.

For his sister, the lasting image of her brother will be something like this: “He is sitting in the middle of some incredibly dignified situation, doing something incredibly silly, like dangling a strip of bacon from his mouth.”

Carrying on the Kastner family business
May 2, 2014 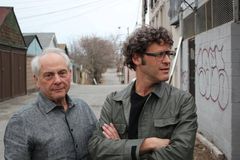