The indignities of aging through midlife can be soul-crushing at the best of times, but when you've lost your job – and to an extent your identity – in the midst of it, there's an added element of disruption. You also suddenly have a lot of time on your hands during which to contemplate the new folds of skin, rogue hairs and loss of ability to remember the names of the Mexican states, books of the Bible or other facts that once came tumbling out of your brain and onto the crossword-puzzle squares.

"It's an odd time," recalls Bill Richardson, beloved radio broadcaster who left the CBC in 2013 – the CBC's decision (but not one he disagreed with, he says). "I'm in a different kind of stage of life; I don't have a 9-to-5 any more, which in some ways makes me crazy, absolutely crazy, because I'm appalled at how much time I can waste, absolutely appalled. When I should have all this time that I can use productively, I stare into the middle distance and poke around and waste time on the Internet."

Living in Winnipeg at the time – where his father, Stan, was dying in a nursing home – Richardson, 60, started spending time on Facebook. Wanting to absolve the guilt of all those wasted social-media hours, he started writing poems for fun – lighthearted narrative rhymes that dealt with a topic he was beginning to know intimately: life in the golden years.

He posted them on Facebook, and his friends (and "friends") were enchanted with the offerings (I was one of them). One friend, illustrator Roxanna Bikadoroff, contacted him, suggesting a collaboration. A publishing deal was secured with another Facebook friend, House of Anansi's president.

The First Little Bastard to Call Me Gramps: Poems of the Late Middle Ages, just published, is written in the style of A. A. Milne 's When We Were Very Young.

The poems, Richardson explains during an interview in his funky walk-up Vancouver apartment not far from Stanley Park, are not generally autobiographical, although there are a couple of exceptions. In Just One More, the narrator wonders if he has enough time left in life to acquire one more dog ("Irresponsible. Consider your age."). In Strip Mall, he observes a grieving couple in a parking lot, having just euthanized their dog. ("Soon that will be me," I thought, as always solipsistic. / Then flayed myself with psychic whips for being narcissistic.")

The poems are meant to be lighthearted – and there are laugh-out-loud moments – but there are also some gut-wrenchers. In The News Cycle, a woman's entire life – its achievements and hardships – is condensed to 36 lines: beginning with the news of her impending birth and wrapping up with her no-show status at her book club because she's bit the dust. A woman's whole life summed up in two pages, with room left for illustrations. Sigh.

Richardson himself has experienced a fair bit of upheaval over the past few years. Two years ago, the long-time CBC Radio host – best known for Richardson's Roundup – was relieved of his position hosting Saturday Afternoon at the Opera and In Concert on CBC Radio 2. He had been at the CBC since 1988 (minus a two-year break after the 2005 lockout). The following year, his father died (the book is dedicated to Stan – who loved to recite poetry). And Richardson, aging himself, was left to examine his shrunken prospects – and this weird new stage of life.

"It's funny because you think, is this it then?" Richardson says, sitting on his divan, his arm around his large, brown standard poodle Esther, who snuggles into him like a lover.

"[There's a] kind of invisibility that settles on you when you get to be a certain age. As though you were given a Harry Potter-like cloak of invisibility. And I do find it quite difficult to adjust. When I was in my 30s and 40s, when I was working in media and when I had a kind of public life, I felt like I was part of a mainstream. … It's a very odd thing to feel as though you've just sort of stepped off the stage and now you play character parts."

Richardson these days divides his time between Vancouver and Holmfield, Man. (population 14 – which swells to 21, he says, in the summer). He bought a bargain-priced house there – formerly a hotel, more recently a hair salon – and later picked up the derelict old hardware store next door for $5,000. He spends summers in Holmfield reading, writing (and, he explains apologetically, not tending to his garden). "It wouldn't suit many people, but it suits me just fine," he says. "It's a great place to be quiet … and it is for me magical."

The rest of the year he is in Vancouver, in his downsized apartment, piecing together a freelance income in his post-CBC life.

"This is what happens to many, many people in many, many sectors when things change and their jobs go away. I don't know that I really thoroughly thought about how much of my identity was tied up with that, though. You know what I mean? Because it was public. And that was a little hard to adjust to because I always had a way to describe myself; I always sort of knew who I was and who I was professionally and then I wasn't that person any more.

"[It's a] small hill of beans," he is careful to add. "It's just what anybody goes through when they lose work they've had for a long time."

He is adjusting – thriving, even. With The First Little Bastard to Call Me Gramps, he has created a perfect gift for anyone hitting a milestone midlife birthday – filled with poems meant to be read aloud (for one of those raucous midlife birthday parties). And he is figuring out this new, less structured existence.

"I've made the transition successfully," he says. "It's a different kind of life and that's been a bit tricky to negotiate. But here I am, standing upright."

An Intimate Evening with Lawrence Hill

The bestselling and award-winning author of The Book of Negroes is back with The Illegal, about a marathon runner who flees his homeland. The story was inspired by the plight of refugees and is published as the issue has (finally) earned international attention and concern. Oct. 20, 8:30 p.m., Waterfront Theatre.

Between the Pages: An Evening with the Scotiabank Giller Prize Finalists

An Intimate Evening with Patrick deWitt

Three Canadian authors discuss their intense, personal and compelling memoirs: Camilla Gibb (This Is Happy), Elaine Lui (Listen to the Squawking Chicken: When Mother Knows Best, What's a Daughter to Do? A Memoir (Sort of) and Michael V. Smith (My Body Is Yours). Oct. 25, 10:30 a.m., Improv Centre. 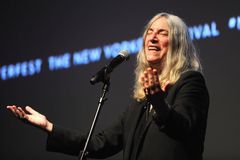