Reviewed by David M. Shribman
Special to The Globe and Mail
Published October 8, 2010 Updated May 2, 2018

Let's start at the end. We still don't know with certainty how Tom Thomson - revered painter of the Canadian wild, beloved contemporary of the Group of Seven, maybe a star-crossed lover, maybe a murder victim, maybe just a lout who needed to be taught a lesson - died out there on Canoe Lake in 1917.

But the Tom Thomson story is one of Canada's best, one of Canada's most mysterious, one of Canada's most beguiling, one of Canada's most enduring. It has captivated writers, poets, television producers, criminologists, psychologists, outdoor adventure outfitters, forensic scientists, historians, fishing guides, naturalists, tourists, generations of Algonquin campers from Ahmek to Tanamakoon and anyone who has taken even one footstep into the Portage Store just off Route 60 or has splashed even one J-stroke from the stern of a canoe in the waters of Canoe Lake.

This is the greatest Canadian story never fully told, a tale that combines the arts, sciences, maybe romance, maybe crime. At the centre of it is a painter who, as his backwoods Boswell, Roy MacGregor, puts it, is "certain to live forever as a Canadian icon that was half art, half mystery."

Now, thanks to MacGregor, who travelled these waters before in a well-loved novel now called Canoe Lake but originally published as Shorelines, we - all of us who are drawn to Thomson's Jack Pine, all of us who are touched in an elemental and sentimental way by Summer Day - are about to set off again in the direction of Hayhurst Point, site of the memorial cairn in the artist's honour, and to visit all of the other landmarks in the Tom Thomson saga, including, we now know, almost for sure, the spot that is the Thomson gravesite overlooking Canoe Lake.

This time, our companion is Winnie Trainor, the woman who loved him, who thought she was betrothed to him, who might have carried his baby - a woman of mystery and mysterious motives whom, it turned out, MacGregor knew in his own Algonquin boyhood. She is the fulcrum in MacGregor's new volume, Northern Light.

Anne Winnifred Trainor, born in Bracebridge, Ont., known as Winnie and remembered for her utter failure in art class, grew up in Huntsville, Ont., now teeming with life, at least between blackflies and Thanksgiving weekend, but in her time a mill town years from its modern role as the latchkey to Algonquin Park.

She was 28, Thomson was 36, when they met, probably in 1913, he handsome and romantic, she attractive and formidable, the area only then beginning to acquire a bustle to match its beauty. In later years, there would be conjecture that Winnie was "Laura" in Thomson's 1915 Figure of a Lady, likely painted on a hill overlooking Canoe Lake.

Northern Light is a biography, mystery, travelogue - and forensic investigation, leading to the positive identification of Thomson's skull, a big deal in the expanding circle of the Thomson-obsessed. And, like much of what MacGregor has written in his books and for this newspaper, a love letter to a special part of North America - one that, it must be noted, held more people in Thomson's day than in our own, though the bear and the fox likely were more numerous - until, that is, the park's first superintendent marked them for death, ordering that they be "destroyed without mercy."

Thomson - part-time fire ranger, full-time painter and probably not the most skilled canoeist these lakes has ever seen - loved what modern visitors crave from Algonquin, though unlike most of the summer people he also was drawn to what MacGregor calls "the rumblings and moanings of the dying ice." But he was a strange character - MacGregor's grandfather distrusted him as a lazy bum - and most of the other two-legged denizens of the forest looked askance at him.

"While other men worked, Thomson would sometimes be seen sitting by the water skipping stones or staring long and hard at a particular tree that almost anyone else would have dismissed as too ugly and scrawny even to bother cutting down," MacGregor writes.

Thomson lured other artists to the Algonquin shores, including A.Y. Jackson, Arthur Lismer and Fred Varley, but few embraced "the North," as he called it, with the spirit and deep spirituality felt by Thomson. Then again, none of them disappeared leaving clues such as a dovish grey Chestnut canoe that might have been overturned and might not have been, a one-gallon can of maple syrup and a tin of jam, and fishing line wrapped around his ankle. (No axe, though - the subject of enduring controversy.)

Through all of this, Winnie was, as MacGregor describes her, "a widow before she even married." He knew this from first-hand experience, having grown up three blocks from her house on Minerva Street and having memories of her visits there in Huntsville and also at his grandparents' Lake of Two Rivers log home. "She was a sight never to be forgotten: a large, dark, sullen figure moving slowly and deliberately, black hat over dark, scowling eyes, her black stockings slipping and rolling down thick legs under a dark dress, an umbrella held in one hand to deal with wandering dogs or teasing children as much as the possibility of rain," he writes. "She seemed to have no smile in her, thin lips set in permanent disapproval." He was terrified of her.

But her role in the Thomson saga, and in this book, is indispensable. She suspected foul play, she raised questions about an exhumation, she kept the doubts alive, doubts that later took form in questions like these:

Was it a suicide? A murder? Was Thomson mentally troubled? Merely drunk? Bipolar? Was there a cover-up? Was there anything to cover up? Did he die (and this is a compelling theory) at the hands of a cuckolded husband, Shannon Fraser, who ran Mowat Lodge, where Thomson often stayed?

Surely no one - no one alive - has as much familiarity with the landscape, the folklore, the story and even the principals as Roy MacGregor. And this is what he thinks:

Thomson never really intended to marry Winnie. Thomson was manic-depressive. Thomson didn't commit suicide. Thomson didn't fall out of his canoe. Thomson probably wasn't even in his canoe when he died. Thomson was responsible for Winnie's pregnancy. Thomson and Fraser, perhaps in a dispute about money, sex or Winnie's pregnancy, got into a fight, Fraser struck Thomson and then panicked, and he and his wife disposed of the body, using fishing line to weigh Thomson's remains down before dumping it in the lake out near Little Wapomeo Island.

"There is no marking at all where he truly lies," MacGregor writes after a visit to where Thomson rests not quite in peace. "He is somewhere in the tangle of raspberry canes, dead spruce, rotting leaves and pine needles, somewhere beneath the saplings fighting for light and the lovely yellow wildflowers that grow all along the trail up to his grave and have found the space and determination to bloom amid the choke and tumble of the fallen leaves and branches that make penetration of the actual gravesite all but impossible."

At the end, exhausted by the chase for clues, we are drawn to the beginning of this volume, not to plunge in again, but to linger in reflection on what readers often miss, the dedication. MacGregor's is but two words long. It says this: "For Winnie."

David M.. Shribman is editor of the Pittsburgh Post-Gazette. Four generations of his family have explored Algonquin's waters and its mysteries.

A break in the mysterious case of Tom Thomson, Canada's Van Gogh
May 2, 2018 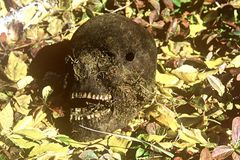 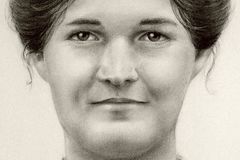