Quinn: The Life of a Hockey Legend

By Tie Domi, with Jim Lang

Pat Quinn cut an imposing figure during his four decades in the NHL, first as a player then as a coach and general manager. Big and burly, he commanded respect when he entered a room chomping on a stogie. Quinn was the quintessential man's man – someone you could envision in an old Western movie, perched on a bar stool next to Gary Cooper with his hand curled around a glass of whisky. It's hard to square that image with one of Quinn sauntering through an arena in Tulsa sporting a gold lamé jacket – but there you have it.

In the new book Quinn: The Life of a Hockey Legend, journalist Dan Robson relies on clear, descriptive prose to paint a compelling portrait of the NHL legend, chronicling the highs and lows of his storied career, examining his relationships with his family, friends and colleagues – and delighting readers with tidbits of information that fall into the "Who knew?" category.

Robson takes a good hard look at Quinn's salad days, and the long, bumpy road the fireman's son travelled from the outdoor rink near his childhood home in Hamilton to the NHL. Quinn emerges as a man with incredible drive and determination.

In the decade before he became an NHL regular, Quinn suited up for seven teams in as many cities. He moved from one city to another, first on his own and later with his wife and young daughters in tow. As honest with himself as he was with others, he knew his considerable size was his greatest asset, so he made the most of it, establishing himself as a respected enforcer.

Quinn was also aware that he was as agile on the ice as Punch Imlach, his first NHL coach, was demure at news conferences. From the beginning of his playing career until the end, Quinn frequently laced up his extralarge skates, took to the ice and spent hours working on his technique. Knowing a great anecdote when he comes across one, Robson notes that Quinn once took lessons from elite figure skaters. Judy Williams, the junior Canadian figure skating champion, beat Quinn in a race in which he skated forward and she skated backward.

The intelligence that later impressed people off the ice – "Every press conference with Pat was almost like a tutorial," one sportswriter recalled after Quinn's death – also served him well as a player. He studied his opponents, taking note of their strengths and weaknesses. Bobby Orr found that out the hard way when Quinn caught the superstar skating with his head down and knocked him unconscious. It was the shot heard around the hockey world, and Robson serves readers well by recounting it in vivid detail.

Fred Shero once told Quinn that a coach must help players learn how to play their best game – and the Philadelphia Flyers' young assistant coach took heed. In his 20 seasons behind the bench, Quinn led two underdog teams, the Philadelphia Flyers and the Vancouver Canucks, to the Stanley Cup finals and twice won the Jack Adams Award as the NHL's best coach. With Quinn at the helm, a collection of superstars who had spent little time together bounced back from a rocky start to win gold at the 2002 Winter Olympics.

Perhaps the biggest factor in Quinn's success behind the bench was his relationship with his players. With few exceptions, they played their hearts out for him because, though he was tough, he was also fair and he had their backs. Quinn was the consummate players' coach.

That was never more evident than in the 2000-2001 season, Quinn's third as coach of the Leafs, when enforcer Tie Domi knocked New Jersey Devils defenceman Scott Niedermayer out cold with an elbow to the head. Despite the public outcry, Quinn jumped to his player's defence. It didn't do much good though. The league handed Domi a lengthy suspension.

The former player recounts the incident in his new book, Shift Work. Written in a plain, straightforward way, Domi tells his life story, stretching all the way back to his parents' arrival in Canada as immigrants in the 1960s.

The book is sure to hit the spot with hockey fans because, by taking them into NHL dressing rooms and discussing his relationships with teammates and rivals, readers get a better sense of what stars such as Teemu Selanne, Mario Lemieux and Mats Sundin were like off the ice. There are no shocking revelations on that front except, perhaps, that Domi once knocked Ed Belfour unconscious to end the star goalie's drunken tirade.

But readers might be surprised to learn there is more to Domi than a flurry of fists and a gaze that rivals correctly interpreted as, "Do you want a piece of me?" In many respects, Domi is not that different from Quinn.

The native of Belle River, Ont., was also a student of the game. He watched his fellow enforcers closely, analyzing their fighting technique with the aim of gaining the upper hand in their inevitable dust-ups. The Niedermayer incident notwithstanding, Domi's altercations weren't angry outbursts as much as they were tactical moves intended to motivate his teammates when their spirits were sagging, or to discourage opponents from jostling the stars on his team. When a fight didn't serve a greater purpose, Domi rarely bothered.

Domi also learned from his mentors – when he was a rookie with the Rangers, captain Mark Messier dressed him down for showboating – and pursued interests outside the game. While Quinn earned a law degree, Domi initiated some business ventures while still playing with the Leafs.

With the exception of the chapters focusing on his childhood, Domi provides little information about his personal life. He doesn't talk about his children until the last few pages of the book and only mentions his ex-wife in passing. Readers need not strain themselves looking for information on his ill-fated relationship with Belinda Stronach. There isn't any.

That being said, there is some … ummm … titillating information in Shift Work. Domi tells readers when he lost his virginity – before he was old enough to drive – and admits to having a weak spot for manicures and pedicures. He also sheds lights on his grooming rituals, revealing that he "manscapes."

This book is sure to change the way hockey fans look at his Comwave commercial. When he's not "standing up to the big guys," he is sitting down with a razor. When it comes to Tie Domi, there's never a dull moment.

Randi Druzin is a sports journalist and author. She has written three books, including the best-selling Between the Pipes.

Three new hockey biographies show all sides of the sport, from romantic to raw and troubling
November 14, 2014 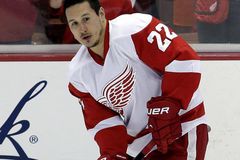 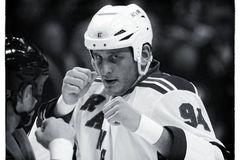 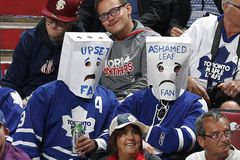