The End, by Anna

Her last, greatest work, The End, was to vault Anna among the world's top artists. Her concept was simple: She would livestream her own death from exposure in the tundra. But things didn't work out that way. Namely, Anna died before she could die for art. By the time of her death, Anna (last name withheld) produced 10 films, 11 photo collections, four installations, three works of performance and several other projects. Impressive, considering "her career was just two and a half years long, from age 20 to 22." The End, by Anna is part elegy, part catalogue raisonné, as our narrator, Anna's close friend, tries to piece together what they witnessed, both in Anna's talent and the path that led to her destruction. Fitting for Anna's short career, this is a quick hit of fiction and it's just the right length: mess without maudlin, the white-hot burn of young ambition, the shimmer of spectacle before it's all cut short.

The Island of Books

In the present day, Dominique Fortier pushes her daughter in her stroller to the parks of Outremont. In Joyce Park or Pratt Park, the author of On the Proper Use of Stars pulls out a Moleskine and, in felt tip, writes a book, "half novel, half field notes, an aide-mémoire." One day, she leaves the notebook in the rain by accident; when it dries, she discovers one half of each page washed away. Half-a-millennium earlier, on the other side of the line drawn by Gutenberg's printing press, a grief-racked, illiterate scribe copies letters from one tome to another in the "City of Books," the abbey library on the island of Mont Saint-Michel. One day, he collects scattered pages from the sea, half of each painstakingly copied sheet erased by saltwater. The Island of Books is the story between Dominique's and Éloi's half-extant pages, across five centuries, a cerebral but sweet book about books and what they mean in our lives.

Let's remove a possible misconception: This is not a book about crows (though ravens are common to several mythologies). Robert J. Wiersema's debut collection (after four full-length works and a novella) is about counting crows, and what it means when you have seven of them. As the old English rhyme has it, "One for sorrow, two for mirth … seven for a secret never to be told." Seven Crow Stories is about secrets – and ghosts: ghosts kept as secret, ghost keepers of secrets, the secret dreams spirits keep to themselves. While this is his first collection, Wiersema's seven stories here span 25 years of writing. (I should say: seven stories plus one, an introductory "storyteller's story.") Grateful introduces the book's questions with youthfulness; the penultimate story, The Small Rain Down, answers from maturity: the characters more experienced, the storyteller's skills much more refined. It most poignantly encapsulates the collection's themes, mixing regret with gratitude, for paths not taken, for life's best gifts. 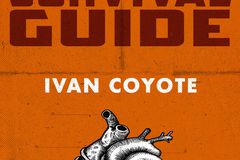 Review
Review: New books from Sky Gilbert, Drew Hayden Taylor and others
October 28, 2016
Review
Review: New books from Joy Kogawa, Leesa Dean and Norman Hallendy
October 7, 2016
Follow us on Twitter @globeandmail Opens in a new window
Report an error Editorial code of conduct
Due to technical reasons, we have temporarily removed commenting from our articles. We hope to have this fixed soon. Thank you for your patience. If you are looking to give feedback on our new site, please send it along to feedback@globeandmail.com. If you want to write a letter to the editor, please forward to letters@globeandmail.com.
Comments