In the early 1970s, as Martin Vaughn-James would recall over 30 years later, "the fog of distant revolutions drifted through the safe, tree-lined streets of Canada." London had had the Swinging Sixties, while the student movement spread across the States, and the barricades went up in Paris in May '68. Canada, in contrast, had preferred her revolutions to be of the Quiet variety: the tumult of an October Crisis simply would not do, Trudeaumania was but an echo of the rambunctious Beatles' brand, and even the celebrations of the centennial had been performed with due decorum. For young artists and writers like the British-born Vaughn-James – who in 1975 published a finely tooled whatsit called The Cage, now newly back in print – the Canadian revolutions under way throughout the seventies would not be political so much as artistic in nature.

Vaughn-James was part of a scattered national vanguard, a generation that reinvented the art forms in which they worked. In Toronto, Michael Ondaatje composed a series of "left-handed poems" that read like a novel, incorporating photos, drawings and prose into his poetic project. Michael Snow made films – on the tundra of northern Quebec, in a New York loft – which explored space, not stories, and were more interested in the camera's zooms than in actors and action. In Montreal, Betty Goodwin made artists' prints using neither etchings nor photos, but actual gloves and vests, transforming these remnants of human existence into objects of aesthetic contemplation. And at Toronto's Coach House Press, then a hothouse for radical literature in Canada, Martin Vaughn-James published his oversized, chimeric "visual-novel," The Cage.

Eschewing both character and storytelling, The Cage is a book that's famously impossible to summarize. Its labyrinthine structure encourages readers to think of the book in spatial rather than narrative terms – so that, as in Snow's films, we discover a place to explore, rather than a plot to follow – while its rhythm and verbal motifs induce an experience more musical than literary. But what truly distinguishes The Cage from most other books of the time are the large-scale drawings that appear on every page, each one depicting a single moment in the story, and all accompanied by typeset captions. A series of hand-drawn images progressing through time and space, combining with text to produce meaning – why, Vaughn-James was making comic books!

Understandable, then, that The Cage would come bearing that euphemistic "visual-novel" imprimatur. Avant-garde innovation – like Ondaatje's, Snow's, or Goodwin's – had been around long enough in literature, filmmaking, or art, to become expected and even valued. But comic books? What serious author would deign to take that illiterate stepchild of the other arts seriously enough to try her hand at it, let alone experiment with it? Throughout the seventies, Vaughn-James was among the lonely early adopters who embraced comics as art. And with apprentice works like The Projector and The Park, and his mature masterpiece The Cage, he created comics like no one had seen before – and like few have seen since.

In an era when comic books comprised 32 pages of colourful pulp – stapled together, sold for small change, and quickly disposed of – The Cage stood out in relief. Here were nearly 200 pages of words and images, bound into a spine and resembling nothing so much as a coffee-table art book. No funny animals or superheroes caroused across these pages. Instead there appeared architecturally precise drawings of empty rooms, unmade beds, and ruined skyscrapers, without a hint of a recognizable character or logical sequence of events. This kind of cryptic ambiguity was unusual even during the heyday of underground comix, those grubby handbooks to the hippie lifestyle whose anything-goes treatment of psychedelic sex and drugs was already on the wane when Vaughn-James created his earliest comics.

The underground's departures from funnybook norms prepared for the shock of The Cage at least a little, but there were fewer precedents for comics that approached the gravity of Vaughn-James's undertaking. When it was first published, there was no terminology with which to understand this kind of ambitious, long-form comic. Though today The Cage is marketed as a graphic novel, in 1975 that term was still years away from entering the popular lexicon, and the idea itself a full decade removed from its first real florescence with works like Art Spiegelman's Maus. Vaughn-James's precursors instead ranged across art history, from the abstruse visual metaphors of Saul Steinberg in The New Yorker, to the surreal canvases of Magritte and collaged picture-novels of Max Ernst. Crucially, Vaughn-James would look for inspiration to Alain Robbe-Grillet, the chief theorist of the French New Novel, who championed an approach to fiction where mysteries reside less in stories than in the processes by which those stories unfurl.

This prickly avoidance of anything resembling conventional narrative is what makes The Cage more of a funhouse than a fiction. Each page presents one image from the "labyrinth of distorted signs" into which we have entered, varying in size from tight close-ups to imposing double-page panoramas of important scenes or loaded moments. Every turn of the page visits some new disaster upon what we see, as though our reading implicates us in the "inevitable flood of mute destruction" that blights the world before us. As that devastation progresses bit by bit, so too does our perspective inch forward through the book's various locales – a wasted plain, a ziggurat, a tiny flat and, most prominently, a cavernous museum fancifully housed within the High Level Pumping Station by Toronto's Casa Loma.

No human figure appears in these places, though, as in Goodwin's art, certain traces of the body do remain. There's a rumpled bed, or a suit of clothes that splays out like a person in distress, and implements like headphones and binoculars that substitute for human ears or eyes. In the absence of an identifiably human stand-in, readers desperate for a guide through the book's mysteries may turn to the narrator. Even this voice, however – about as straightforward as one of Samuel Beckett's narrators, and as clinical as one of J.G. Ballard's – remains forever disembodied, and almost mechanical.

Thus unmoored from any human presence, the text keeps returning to the cage itself. But what is the cage? It reappears throughout like a protagonist would in a traditional novel, but is in the end significant "only because it remains." The artist renders the cage in his straight-lined style as a series of steel posts standing in the desert, wrapped with chain-link fence or strands of barbed wire. Visually, then, the cage is clear, but thanks to Vaughn-James's figurative language, it also has a muddier, metaphorical dimension. So is the cage just that bare-bones structure, or is it the very book itself – this puzzling prison-house of language, The Cage, this "vacuous, stale and airless bag of words"? Or might the cage also be the human body, this enclosed space from which we view the world, and whose rapid decay Vaughn-James dramatizes for us on every page?

Our inability to settle on a single interpretation for any of the book's enigmas is precisely the point. The Cage is a labyrinth we were never meant to find our way out of. As Vaughn-James wrote in the original jacket copy, "The very substance of the narrative today should be the destruction from within of the worn-out sign-language of our culture." Our usual ways of understanding a story, or time, or space, have all been obstructed here, in order to shake us out of convention and habit, in "the hope that we might see differently." Few books indeed – even of the kind without drawings – force us to see the world from quite so alien a vantage.

The Cage was a comic book ne plus ultra, both for Vaughn-James and the field as a whole. Increasingly, the author would choose to work not with images and prose together, but rather on their own, in his subsequent life as a painter and detective novelist – careers he would pursue in Europe rather than Canada, before passing away in 2009. And while Vaughn-James would never truly follow up on his work of the seventies, neither would any more than a handful of cartoonists find inspiration in The Cage. The cartoonist Seth has been more sympathetic to Vaughn-James's body of work than most – a fellow-feeling that comes across not only in the younger artist's haunting evocations of place, but also in his introduction to this landmark reprint, so helpfully honest about the book's difficulty. Still, one suspects that Vaughn-James has been neglected not because of the challenges his work presents, but because it has languished out of print for so long before the current reissue.

There are few truly novelistic graphic novels, and among those there are fewer still masterpieces. The Cage, as Seth attests in his introduction, is one such pinnacle. It embodies a revolution in comics that never actually happened – not yet, anyway. But now that it's back in print, The Cage is free to roam those tree-lined streets of Canada once again. Look for it to up-end all our safe, conventional ideas about what comics can do – and to question, once again, how we see the world, from within our cages.

Sean Rogers's writing on comics has appeared in The Walrus and The Comics Journal. 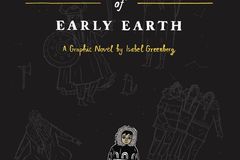 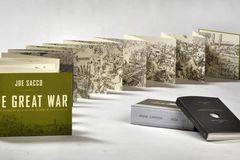 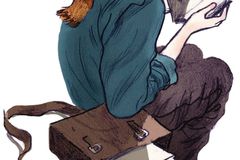