Once upon a time, The Globe and Mail owned a de Havilland airplane that was used to fly wire service photography equipment around the country.

Everything in that previous sentence belongs to a different era: de Havilland is no longer in business, wire service photographers are nearing extinction – and The Globe? No longer merely a newspaper, it publishes text, video, photography, audio and data on numerous platforms that instantly reach around the world.

John Stackhouse joined The Globe in 1990 and, over the ensuing 24 years, served as a business writer, foreign correspondent, writer-at-large, foreign editor, editor of the Report on Business and, from May, 2009, until March, 2014, as editor-in-chief. He had a front-row seat on the disruptive forces roiling the industry, which he covers in his new book, Mass Disruption: Thirty Years on the Front Lines of a Media Revolution. Last Wednesday afternoon, he spent an hour at a restaurant in downtown Toronto discussing the book.

Is it okay if I turn on my recorder?

Yes. This is all very unnerving. You know – as a journalist, you're more comfortable asking questions than answering.

I presume there's another level here because of your history with The Globe. Do you miss being there?

Yeah. I miss being in a newsroom, there's no environment like it. Miss being in journalism, actively in journalism. Always will. Can't imagine there are many journalists who leave the profession who don't miss it. It doesn't mean I want to go back to it, but I think there always will be something about journalism – about The Globe, as the epitome certainly of print journalism in this country, I would argue – that I continue to miss. And I don't mean that nostalgically.

You speak earnestly, passionately in the book about journalism's mission.

There is something incredibly important, essential even, in newsrooms, and in news organizations. Not just journalists, and the journalistic community, but I think everyone in a democracy has to be concerned, and has an interest in seeing those strengths continue. Because on those strengths rests a lot that is important to, essential to, democracy.

Most journalists are intimately familiar with the disruption your book describes. When you joined The Globe, it was spending freely. Now, my colleagues joke about the duct tape on the carpet – though of course The Globe is moving to a spiffy new building next year. I presume you've written this book mainly for those outside the industry?

This is meant for people who are interested generally in disruption and what it is doing to industries. I wanted to hold up the news industry, and especially newspapers, as a case study, and say: 'Here are some of the decisions that this industry and I wrestled with – not always with positive outcomes. Maybe you can learn from that.'

You suggest Canadian 'books and beer and banking' are under similar threat. So, okay: You're working for a big fat bank now, as the senior vice-president in the office of the CEO for RBC, advising senior management about global trends that might affect the business. How soon before the Canadian banks get disrupted?

Oh, I think they're being disrupted as we speak. And they're also trying to disrupt. You see lots of peer-to-peer lending, for instance, in this country. But that's not dissimilar to what media started to feel 15, 20 years ago. And many people thought, 'Oh, this is just going to be on the edges.' And then the disruptors started to move closer to the middle.

I guess what I really want to know is, how soon before I go to the 39th floor of RBC Plaza and find the carpeting is a patchwork of duct tape?

Haha – that's a good question. The answer is: I don't know, because no one knows. I'll quote Larry Summers, who I heard recently speak. He said, [disruption] generally takes longer than people predict, and once it starts to take effect it happens faster than you ever thought possible. We saw that with media, with mobile uptake. We were generally wondering: How long will it take for the iPhone to have a significant impact? And in hindsight, it seemed to happen very quickly!

There are a few moments in the book where you express regret over editorial decisions: With The Globe's G20 coverage in 2010, you say you weren't fast enough to pick up on the feeling on the streets; you also suggest that, in the desire to give digital readers fresh content early on, you sometimes suggested removing stories from the homepage too quickly. Any other regrets?

We were churning, or cycling content – as were many news organizations – in an effort to grow our overall audience. It almost became like an arms race: partly journalistic pride, wanting to have a big audience; partly advertising pressure, to be able to deliver a big audience; and partly organizational ego, to want to be in the top tier. While I hold that up as something that we could have done better at the time, I also hope journalists appreciate and see, though, that the shelf life of journalism is shorter than that which even I enjoyed 15 or 20 years ago.

That's a conundrum, but it's sort of not just one for journalists to come to grips with, because I hope the book helps readers think through their obligations and connections to the journalists.

It's interesting that you mention readers' responsibility.

So, the election that just finished had extraordinary voter turnout. Highest since 1993. Which is fantastic. One of the reasons, I would argue, that voter turnout went up is I think there was some important and serious journalism going on through the campaign. It wasn't just that alone. But the campaign would not have been the same had there not been the presence of [for-pay] media.

True. Though Buzzfeed had some nice scoops. And Vice was good.

Vice did really interesting work. As did HuffPost.

See – I thought you were going to say there was great turnout because everyone wanted to re-elect the Conservatives in hopes that Stephen Harper would resign.

[Stackhouse takes a sip of coffee, smiles, looks into the middle distance, says nothing.]

Okay, I'm kidding. But The Globe's editorial last weekend wasn't the first time it has published an endorsement that drove people bonkers. In 2011, as editor-in-chief, you oversaw an editorial endorsing the federal Tories, which led to – would you call it a backlash?

Backlash, I think it's safe to say.

You hold that out in the book as something to be celebrated. At the same time, you decry the polarization of society and media. How do you square that?

In an editorial endorsement, newspapers take a stand around which the public – some of them very angry at the time – can formulate their own thoughts. To me, that was always one of the great values of a newspaper endorsement. It's not to try to instruct people. It's to argue a position around which people – they can vociferously disagree with us, as we experienced – but they had to articulate their disagreement. And that to me was a great victory. If people were furious – even those who cancelled their subscriptions – I'm grateful that we forced them to think through why they would make such a decision. And I was struck in this election by the attention that went to various endorsements across the country. In some ways, that seems an antiquated term. 'Newspaper endorsements.'

The book details your tour of news outlets responding well to disruption in various ways. But most still aren't profitable: The Guardian is owned by a money-losing trust, others seem like playthings for their billionaire owners. Who is doing it well?

No one has found a formula for the economic base – if they had, it would be copied the world over. I'm not sure there will ever be a particular formula, the way there was 50 years ago – and in those days the formula was to own a printing press! Journalism to me – I say this as a reader – seems to be very strong. It's the economic model of journalism that is still a work in progress. Journalists have to be more entrepreneurial in their approach to what they do. The owners need to be more long-term oriented in their thinking, because it's going to be another decade of ups and downs –

Patient capital. And readers need to increasingly see the importance of what we're consuming in value, we should pay for. And media organizations, I would argue, need to continue to explain to the public the value of what they're buying.

Editor's note: An earlier digital version of this story incorrectly stated that Mr. Stackhouse became editor-in-chief of The Globe and Mail in May 2010. This digital version has been corrected. 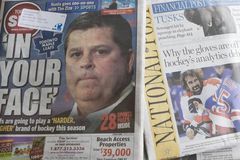 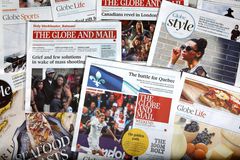 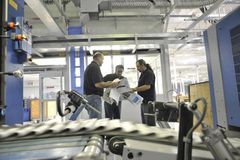