Linwood Barclay is the author of more than a dozen novels, including Trust Your Eyes, No Time For Goodbye and Never Look Away. A former newspaper columnist, his fiction has been published in 30 countries and translated into 40 languages. Barclay's most recent novel, Broken Promise, is the first instalment in a trilogy to be published over the next 18 months.

I wanted to do something bigger, more ambitious. Broken Promise is the first of three linked novels and I've never attempted anything like that before. There's a back story that builds through the first two books and explodes in the third. There was a lot to keep straight. I was having a conversation with my editor about a scene in the book I wanted to tinker with, and he couldn't find it, and then I realized, oh yeah, the scene is in the next book. It would be easy to write the same kind of story year after year. I created a challenge for myself with Broken Promise and the two books that follow. I was afraid I'd get to book three and think of something I needed to set up in book one – once it was already published – so I wrote them back to back.

Knowing how much energy it takes to write anything – good or bad – I am reluctant to attack other authors, but I think I can tell you how much I hated The Canterbury Tales without hurting Chaucer's feelings. I don't think he reads the Globe. I'm not saying it's bad. It just wasn't my thing. Every Chaucer class I attended at Trent University I kept thinking, "Kill me now." And I only got through the first Dragon Tattoo book. I didn't hate it, but it was work. Life's too short.

Would you rather have the ability to be invisible or time-travel, and why?

I can't help but think one's motives for wanting to be invisible border on the creepy, so I'm going with time-travel. I'd love to go back to 1920s Virginia and see what life was like for my father as a young man. Exploring the Toronto of the 1950s would be fascinating. And I wouldn't mind skipping ahead a couple of years to find out whether Donald Trump becomes president. I'd have time to prepare for the apocalypse.

What scares you as a writer and why?

The scariest thing is the fear you won't be able to do it again. I just finished writing three novels in about 15 months – I usually do one a year, but I wrote my trilogy in one long stretch – and I'm still winding down from that. But I know come January, I need to sit down and start another novel. Will I get a great idea by then? Will I be able to do it? I know the answer to those questions is most likely yes, but there's a nagging fear the idea won't come.

It may not be the best death scene, and it most likely does not qualify as literature, but when I got to the last few pages of Thomas Harris's Hannibal, and read the scene where he uncaps a man's skull while the victim is still alive, and carrying on a normal conversation, it stopped me. How, I thought, does someone come up with something like that?

Book Review
On the 100th anniversary of Ross Macdonald’s birth, Linwood Barclay reflects on the mystery writer’s work
May 1, 2015 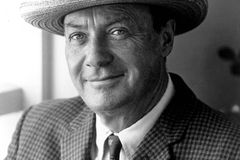