There's something irresistible about the Classical world. Throughout history, writers revisit the ancient stories again and again. Oedipus becomes Hamlet; Odysseus becomes Leopold Bloom; Alexander the Great becomes Colin Farrell. (Okay, some adaptations are more successful than others.) Something about those primal tales of war and lust and family dysfunction draws us back again and again. We find honesty in war unmediated by machines (Mary Renault's Fire from Heaven), as well as humour and familiarity in the squabbling gods and goddesses (Marie Phillips's Gods Behaving Badly).

The challenges facing the writer who decides to take on this world are daunting. To what extent are you allowed to rearrange history? Reimagine characters? Make stuff up? In updating the old stories, must one cleave to the ancient poetic forms (Derek Walcott's epic Homeric poem Omeros) or make the transition to a more accessible prose narrative (Grant Buday's brilliant reimagining of the Iliad, Dragonflies)?

And then there's the question of contemporary relevance. Why tell these old, old stories? Do they really have anything to say to our tweeting, texting, 21st-century iSelves?

Sometimes it seems there are only two veins in ancient storytelling left to be mined: the parodic and the morally righteous. We enjoy clever anachronism or historical revisionism (as in Margaret Atwood's Penelopiad). We also enjoy the sensation of moral superiority we gain by looking back at less enlightened times. Weren't women treated horribly back then! Wasn't that outrageous!

In my first historical novel, The Golden Mean, I fought back against the stereotypes that reduce historical fiction to "genre" rather than "literary" fiction in many countries (with the usual implications for foil covers and pulpy prose). I imagined the relationship between the philosopher Aristotle and the young Alexander the Great, his teenaged student. Historical accuracy mattered to me; serious contemporary resonance mattered to me (in the form of bipolar disorder and PTSD); female characters did not. No damask and heaving bosoms on my cover, no sir!

But I knew from the start of my work on The Golden Mean that I was embarked on a two-book project. The male world is, after all, only half the story. I knew I wanted to explore the female world also, while still avoiding the breathlessness and the bromides.

The Sweet Girl is a mash-up of my life as a 21st-century wife and mother and my imaginary life as a 16-year-old girl in ancient Greece. Pythias, Aristotle's daughter, must make her own way in the world when her father dies. In a time of political upheaval, she finds herself alone and far from home. "A Jane Austen heroine who likes sex" was how I imagined her to my editor, long ago, when the novel was still the size of a kiwi seed in my brain. I gave her a clear eye and a quick wit, a plain face and a household to run. I gave her sex with a god and marriage to a soldier whose psychological scars were deeper than his physical ones. I also gave her and me the gift of a visit to the land of her birth.

I didn't go to Greece during the writing of The Golden Mean. Not enough money, babies too small, too hard to get the time away. Anyway, I told myself, you can't go to ancient Greece. The ancient port city of Pella, where much of the novel was set, is now a mile or so inland thanks to 2,300 years of silting. Aristotle's school is a recent archeological find, and excavations are barely begun. The crossroads where Oedipus killed his father is commemorated with a gas station. The past is a foreign country, as the British novelist L.P. Hartley famously said.

At first, I didn't know what I was looking for. I felt a pressure peculiar to novelists, that of subconscious research. Long after I returned from the trip, during those early mornings and late nights of a rainy Vancouver winter, I'd realize what had been important. It was rarely what I had consciously noticed: dates dutifully jotted in my notebook, photos of monuments, sketches of fortifications. No, not those: Fiction makes other demands.

Fortunately, I also took pictures of museum artifacts that only a mother could love: fifth-century BC barbecue tongs, tweezers, an ancient child's sippy cup complete with handle, strainer and spout. Even a potty – you could see the faint remnants of a rooster someone painted on its side. Come on, little Athena, do your pee-pee! Look at the rooster! Try for mummy!

Some of the objects I saw in Greece that made it into the novel: a dove-shell hair clip, thorny burnet, which historians call the bubble wrap of the ancient world, and an enormous and terrifying speculum in a case of ancient medical instruments.

I bristle when I hear myself referred to as a historical novelist. There's something about the phrase that always sounds a little pejorative, a little Disney. Things I hate about historical fiction: the silly, stilted dialogue; the endless descriptions of gowns and goblets; the Cinderella female characters; the taboo love stories, allowing us to get pleasantly outraged about what are, for thinking adults in the 21st century, settled moral issues. She fell in love outside her class! Her race! Her gender! Egad!

Things I love about historical fiction: the mundane, the everyday, the familiar; themes that resonate with the present; characters who sound like you could have an intelligent conversation with them. I like books where descriptions of characters are more complex than descriptions of clothes. I like characters who spit and fart and vomit and bleed and swear like I do on a bad day. Navel-gazing? Maybe. Anachronistic? I don't think so. Cleaned-up history isn't history at all; it's writing for children, and even children know to distrust it. The key to reimagining the Classical world, for me, lies in refusing to admit its difference.

What I got from my trip to Greece was the joyous grubbiness of the everyday: the hawkers in the market selling pirated videos (lentils in the novel), the crude carvings of midwives assisting women in labour, and yes, even that ancient potty. I think Pythias would recognize her world in ours, and I hope readers will recognize their world in hers. The ancient world might be a foreign country, but classical stories are the passports that get us there.

Annabel Lyon is the author of The Golden Mean and its sequel, The Sweet Girl. 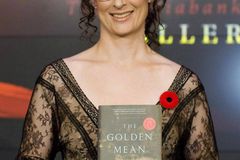 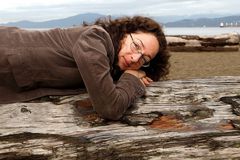 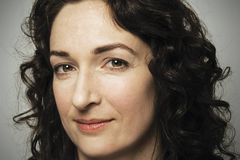