Perhaps I am the wrong writer to review this book as I know Ian Brown, a little, and his wife, too. I find him charming but often puzzling. Long ago, someone wanted to set us up on a blind date and I demurred (the arrangement more than the man). Later, when I met him professionally, I would be relieved: he was obviously intelligent, but he could also be scathing, rigid, mercurial; it was difficult to put down roots in a conversation with him.

As for his wife, Johanna Schneller, she too was elusive, so clearly clever, yet pinned by some invisible undertow, sublimated to endless rounds of child-care and medical appointments. "She's never available," a producer complained after trying repeatedly to book her as a guest on a television panel I hosted. "It's not normal how much time she spends on her kid."

Ah, how it all makes sense now: It was the Moon Boy. And the time-sucking, pain-making, muscle-tearing battle to rear their wildly disabled child trapped in the rare genetic maelstrom of cardiofaciocutaneous syndrome. Who has time for chit chat amid "the years of desperate worry and illness and chronic sleep deprivation, the havoc he has caused in our lives, threatening our marriage and our finances and our sanity"? Oh, why didn't you tell more of us? We could have helped, in so many ways.

Walker Henry Schneller Brown was born on June 23, 1996, and stays frozen in time, a grunting, self-mutilating Dorian Gray, encased in diapers and the intellectual development of a toddler, dependent on tubes for food, drugs for breath and the kindness of strangers for his well-being.

Yet even more taxing than the endless rounds of feeding, rocking, cleaning, massaging and restraining this boy, who would punch and bang his head to a pulp if permitted, is the frustrating journey to plumb his sentient depths. "Sometimes watching Walker is like looking at the moon: You see the face of the man in the moon, yet you know there's actually no man there." But Brown is a driven journalist, a modern quester, hardwired to seek meaning. "What is the value of a life like his - a life lived in the twilight, and often in pain? ... All I really want to know is what goes on inside his off-shaped head, in his jumped-up heart.''

As he did for his previous mission to understand masculinity, in Man Overboard, Brown hits the road, this time to scrounge information from experts in genetics, psychology and spirituality as he struggles to understand the condition his son shares with just over 100 people in the entire world. Along the way, Brown sits down for coffee and a cry with a handful of parents in far-flung cities who are also piggy-backing these high-high-maintenance kids. Eventually, as much for solace as for sense-making, he winds up in France with the renowned Jean Vanier, hero to the handicapped.

Does this sound formulaic? It is. Even some of the details will be recognizable, as Brown, a prolific newspaperman, has previously published his Vanier letters and articles about Walker in this newspaper. But please, please don't make the mistake of passing up the book if it feels familiar - because it is astonishing, both in its content and its triumph over form.

Always a writer with a pretty turn of phrase, Brown has moved far beyond those party tricks and forges his most authentic thematic through-line yet: a raw, flawed (deeply exhausted) man in search of his mute, unknowable son, or at least a way to be proud of him. "If you spend a lot of time with a disabled child ... who was not supposed to live and whose survival nevertheless radically changed your life ... you feel you can break the rules."

Read an exclusive excerpt from the book

More than anything, that's the secret of this book's success: Brown boldly goes where even he - smart-mouthed, combative scribe - has never gone before, into the very core of compassion and anger and pain. As a whole, this is all new, for readers and, I suspect, for the writer, too.

Brown slices through ignorance and trite consolation, leaving the eviscerated skins of relationships, social policy and medical expertise flapping in the wind. He spares no one, least of all himself. "On especially difficult nights ... or ... after the terrible arguments my wife and I sometimes had, strained by sleeplessness and ashamed of our failure with this strange boy, I asked myself if it might not be braver to take my life, and to take Walker with me." He rejects relief in religion. "It was hard to think of Walker as a gift from God, unless God was a sadist who bore a little boy a grudge."

Even a brilliant idea to forge a new "Walker's Village," with its ethos set by the disabled and success determined by friendship, not money, is given short shrift. "In my fantasy, lots of people want to visit and live in Walker's society for extended stretches. ... Composers, writers, artists, students, MBA types ... researchers, executives on sabbatical ... where we are encouraged to pursue our work, our art and our studies." Brown is too beaten to believe in a happy ending, yet honest enough to long openly for one. "What if Walker's life is a work of art in progress - possibly a collective work of art? Would that persuade you to take care of him for me?"

It took Ian and Johanna seven long years to find a supportive place for Walker to live and learn (a scandal in itself). They toiled day in and night out with an unfathomable burden, and must wonder what life would have been like had they not been drafted into duty for their disabled son. With time to read and write, how much more would they have accomplished at work, in the world?

No one can know, of course, but without the boy in the moon, his father most certainly would never have written this magnificent book, and that would have been another crying shame.

Paula Todd is the author of A Quiet Courage and an investigative journalist with CTV's W5 .

A house becomes a museum of missed hopes
September 25, 2009 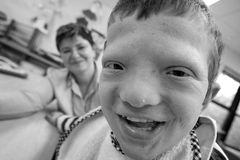