You know how, when you're having a debate or discussion – or argument – with someone, and you come up with the perfect retort to one of their points – but not until well after the conversation has ended? Well, take heart: You have something in common with Salman Rushdie. On the line from New York, the multi-award-winning, knighted, superstar British-Indian author whose novels include the Booker Prize-winning Midnight's Children, explains that he has come up with a response to something he was asked by an interviewer the previous day. Rushdie is on a media blitz for his latest novel – his 12th, and his first novel for adults since 2008. The interviewer, he explains, suggested it was wrong of him to have an old man, the character Ibn Rushd, have an affair with a young girl, Dunia – and she wondered whether that had anything to do with Rushdie's own personal life.

"I think [it's] worth stressing … that she's not a young girl, Dunia," Rushdie explains to me, a day after the question was posed by someone else. "She presents herself to him as a young girl, but she's tens of thousands of years old. In fact at one point she says she remembers seeing the dinosaurs, in which case she's millions of years old – and that makes him her boy toy."

Did Rushdie Ping-Pong that back to the interviewer, when asked?

Not really (of course). Rushdie has a long list of accolades, he is famous and prolific – and a many-times-over bestselling author. He became a household name and reluctant poster child for freedom of speech when a fatwa was placed on his head by Iran's Ayatollah Khomeini in 1989 after the publication of his novel The Satanic Verses, which Khomeini called blasphemous – and Rushdie was forced to go into hiding for years. In the world of literature – and far beyond (even as far as that Seinfeld sauna scene) – he is a very big deal.

But when he calls in for a telephone interview from his home in New York, he is warm, funny, kind and engaged. No pat answers. No haughtiness. No superstar treatment, with a third party connecting us and counting down the clock. Rushdie – fresh, despite the countless interviews on his schedule – seems to be enjoying the conversation, the occasion of which is the publication of his apocalyptic, supernatural tale Two Years Eight Months and Twenty-Eight Nights.

That's the equivalent of 1,001 nights, if you're doing the math, and the book indeed takes its spirit from the traditional "wonder tales" of the East, magical fairy tales, the fantastical – yet it is rooted in a sharp, contemporary, real-life perspective, with references ranging from reality TV to Donald Trump to the Westboro Baptist Church.

Two Years opens in the 12th century, when jinn (genie) princess Dunia falls in love with Ibn Rushd, the real-life philosopher (known in the west as Averroes) for whom the Rushdie family is named (more on this in a moment). Then, hundreds of years later – in the near future – strange things begin to happen following a violent storm (inspired by Hurricane Sandy, which Rushdie experienced in New York). A down-to-earth gardener finds himself hovering just above the ground. A mystery baby is able to weed out moral decay by physically marking anyone corrupt who comes into contact with her. A scorned woman shoots deadly lightning bolts from her fingertips. A would-be graphic novelist's superhero invention comes to life as a wormhole appears in his bedroom, allowing the jinn to enter the 21st century. These characters are the half-jinn descendants of the Dunia/Ibn Rushd union – identified physically only by their absence of earlobes. What follows is the War of the Worlds – the ultimate battle between reason (represented by Ibn Rushd) and superstition (or faith – religion, represented by Rushd's intellectual rival, the theologian Al-Ghazali).

It's no surprise which side of this argument Rushdie – whose father changed the family name to honour Rushd – falls under. Rushdie, famously an atheist, inserts digs in the novel at religious zealots – such as the Swots (standing in for the Taliban), a "murderous gang of ignoramuses" whose long list of forbidden pleasures includes painting, sculpture, music, theatre, journalism, voting, pool tables and pleasure itself – and would have liked to have forbidden women altogether. Realizing this was not entirely feasible, "they contented themselves with making women's lives as unpleasant as possible," he writes.

I wonder – when you're Salman Rushdie and you've been forced into hiding for almost a decade with a bounty on your head, do you think twice about writing such things?

Rushdie's previous book, the memoir Joseph Anton, detailed that time in hiding; the author who had never been interested in writing an autobiography found himself not only writing one – but making it his longest book to date. Yet it got the monkey off his back, he says, and he was relieved to be able to tell the story – and move back to fiction.

With the fatwa, Rushdie says he received "the curse of an interesting life" – and during the interview, he said he was thankful to have gone back to a more ordinary existence (so he says). "Writers need boring lives. They need to be able to sit in rooms for long periods of time in which nothing happens. So I'm happy to have escaped back into the Books pages." Despite being knighted, hobnobbing and collaborating with the likes of U2, and racking up talk-show appearances with A-listers such as Jimmy Fallon and Bill Maher, Rushdie does not, he says, think of himself as a celebrity writer. "I think of myself as a person sitting at my desk trying to make something work. The thing about writing is that it is unbelievably difficult and because it's so difficult it – how shall I put this? – it keeps you honest. You don't have time to think about yourself as a superstar; you're too busy trying to make a sentence work."

(On his extracurricular activities, Rushdie is big on Ping-Pong – frequent opponents include the writer Jonathan Safran Foer and Paul Holdengraber, who runs the public talks at the New York Public Library.)

Rushdie was born in Bombay (now Mumbai), sent to boarding school (which he disliked) in England and now lives in Manhattan (not Brooklyn, he stresses). One enormous difference he has noted moving from London to the United States, he says, is the importance of religion in American culture. "New York is less infected by religion than a lot of America, but still it's here," he says.

When he discovered that his father had named the family for Ibn Rushd, Rushdie began doing his own reading and discovered that he too felt attracted to him and his beliefs, as his father had. "So I thought, well, this is the right flag to sail under. And then of course when the attack on my work began I realized that now I had that in common with him too, because he was attacked for his progressive ideas and he had his books burned and so on. During his life he was reinstated; there was a period of his life when he was in trouble. So we have that [in common] too. And so because of all those echoes he found his way into the book."

Two Years is a swirling, satirical tale (it is set in a New York where an act of defiance in the middle of an unrelenting, unprecedented war involves opening an upscale eatery) that can be read on a variety of levels – and it has received some glowing reviews. But at one point, Rushdie explains, it was "a total mess." He has realized that it took him about the length of the novel's title to write the thing – the first year or so taken up with experimental writing which produced about 100 pages. Rushdie sent them to his famous literary agent, Andrew Wylie, who said he thought it was very funny but wasn't quite sure where it was going.

So Rushdie took a page out of Michael Ondaatje's book. He recalled something the Canadian writer had once told him about "discovering the book by doing the book" – having multiple narrative storylines to pull on, seeing where they led him, trying out different directions. At the time, Rushdie says that process sounded difficult. But with this complex, multithread book, it worked for him. He figures there were more than 100 pages that didn't make the final cut.

Rushdie, on an epic book tour, is heading to Toronto for a public event, and then Banff, Alta. He's been to the Rocky Mountain town once before, he explains. In the 1970s, he was writing ads for Air Canada when he was doing some work for the advertising agency Ogilvy & Mather, which had Air Canada's TV account. Rushdie was sent by the airline on a whirlwind tour of Canadian beauty spots to inform his writing. In Vancouver, he rented a bicycle and rode around Stanley Park, he rode a train through the Fraser Valley to Calgary ("one of the most beautiful days and nights of my life, really"). He remembers the trip well – including stops in Lake Louise, Toronto, Montreal, Quebec City – but "mercifully" the advertising he wrote is lost, he says.

That long-ago day job, which also saw him make a Clairol Loving Care commercial with filmmaker Nicolas Roeg (and which he quit after Midnight's Children, his second novel, was published), taught him something he still uses in his career: the need for discipline as a writer. "You have no time to have creative tantrums in advertising," he says. "You've got to get the work done on time and it's got to be good. You learn to write like a job. And I've always done that. You sit down in the morning, you do your day's work, you don't stop. You don't give yourself permission to."

Salman Rushdie will appear at the Toronto Reference Library on Sept. 24 at 7 p.m. (torontopubliclibrary.ca) and at the Banff Centre on Sept. 26 at 7:30 p.m. (banffcentre.ca). 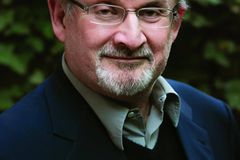 Four books that capture what it’s like to be a refugee arriving in Canada
September 4, 2015 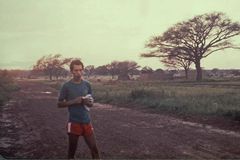