In the waning years of the last century, Timothy Cahill scored an international success with How the Irish Saved Civilization. It wasn't about the brewing of the first pint of Guinness, but rather the story of how, in the wake of the collapse of the Roman Empire and the destructive rise of the Visigoths ("Aristotle? We don't need no stinking Aristotle!"), groups of plucky Irish monks in isolated monasteries "took on the great labour of copying Western literature - everything they could lay their hands on."

Had it not been for these dedicated, flea-ridden scribes and the Catholic missionaries who then carried their works and words to Europe's scrofulous hordes, the world would have been entirely different. It would have been a world without … books!

Today, 550 years after Gutenberg's invention of mechanical movable type, not a few pundits believe we are on the verge of undoing what those Irish clerics did - that is, establishing a world without books. While novels, biographies and scientific tracts will continue to be written, they won't materialize in book form. They'll be accessed digitally via a potpourri of portable, paperless devices whose harbingers go by names like Kindle, Kobo and iPad. In this scenario, much of the infrastructure that has girded the vast ecosystem of the book - bookstores, new and used, the book section at Costco, libraries that you actually have to visit, the book sale in the church basement - vanishes. Meanwhile, the "monasteries" of the 21st century will be the rare-book libraries and special collections in universities, antiquarian booksellers working out of their homes or in shops on the margins of downtown, and independent, small publishers committed to producing hand-crafted, limited-edition works - the book as objet d'art.

Not everyone shares this attenuated vision, of course, even those who might stand to benefit by its realization. Michael Torosian is the founder of Toronto-based Lumiere Press, which since 1986 has produced only 20 books. Each has been about photography or photographers. Each has been hand-made in editions of 50-300, to sell for anywhere from $150 to $1,000. Lumiere's reputation is such that its titles have become "must-gets" for many institutions and art connoisseurs.

Torosian acknowledges that he's tapped into a specialty audience and thereby "sort of made himself immune" to the vagaries of the "common book." Nevertheless, "the largest and most abundant single artifact from the Middle Ages that still exists today is books," he observed. "Armour has been melted down. Fabrics, textiles have crumbled. … But the book has remained. … I think it's really hard-wired into our DNA: whatever you put in it, it gains a validity, a mystique, a prestige. And if it's really beautiful and carefully crafted, all those elements are elevated."

Indeed, as he and Richard Landon, the veteran director of the University of Toronto's Thomas Fisher Rare Book Library, note, the book and its antecedents (the papyrus scroll, the cuneiform tablet, the illuminated manuscript) have been around for so many thousands of years it's the digital/electronic world that must prove its worth, not the other way around. "There is no substitute for the book," Landon remarked. "Everything else has been or is an add-on."

Torosian added: "Remember floppy disks?  Remember all the talk about CD-ROMs becoming the standard medium for reference? I have every reason to believe a decade from now, possibly 15 years, people are going to be plucking iPads and Kindles out of garbage cans and wondering what they are. By contrast, the book today is recognizably the same artifact it was in the Middle Ages."

David Mason, who's sold rare and fine books in Toronto for more than 40 of his 70 years, agrees that "the book was born perfect and remains perfect. Nothing has bettered [it]and nothing ever will." However, he believes "the book business is largely finished" - killed by the Internet, by chain behemoths and remainder outlets that have conditioned the public to regard books as heavily discounted entertainment, by the recession and high rents, by the rise of the e-book "and all that crap." For taxation year 2009, Mason claims sales in his basement store dropped 40 per cent from 2008.

Yet just when it appears the book has lost its central place in the culture, when its illustrious past affords no promise of a stellar future, the book has never been more valuable. Or, to be more precise, certain books - what the industry calls "high spots" like The Great Gatsby and The Origin of Species.

Unsurprisingly, "it's easier now to sell a $2,000 book than a $20 one," Mason remarks. In fact, he predicts, as the common book fades away, he'll be "selling books the way antique dealers sell curiosities, as symbolic artifacts," mementos of a vanished or vanishing era. Antiquarian dealers of his ilk will persist into this century if only because institutions like the University of Toronto will require his appraisal skills, and scarce books in superior condition always will find buyers,

But book collecting is "an acquired taste," Mason notes. "If there are no bookstores, how does a young collector find out he's a collector? If you don't have exposure to older books, to other books - and where can you find such a thing except in a bookstore? - if kids aren't coming into bookstores to look for the $5 book, they're never going to discover the beauty and the pleasure in buying a $100 book or a $1,000 book."

Landon thinks Mason, with whom he's been friends for more than 40 years (and "whining the whole time"), is unduly pessimistic.

Take the Darwin Correspondence Project, orchestrated by Cambridge University Press. By 2025, it expects to have published all the known correspondence Charles Darwin wrote. It's a herculean effort near and dear to Landon because, by general agreement, the Fisher has the largest collection of Darwinia in North America. To date, 18 volumes have been published, with another 12 scheduled.

You'd think by now sheer expense - volume 16, for instance, is a two-book 1,300-page hardcover selling for more than $400 - would have driven it online. But no, the books keep selling and Cambridge is planning to churn out the balance far into the 21st century.

"Certain references will be published as part of websites … all the stuff that didn't get into the book, the evidence of the research and the like," Landon noted.

But finally it is the books, seemingly at once inadaptable and forever adaptable, that are the thing. 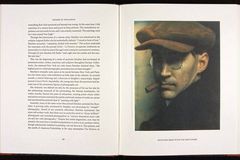 The book is dead … long live the book! 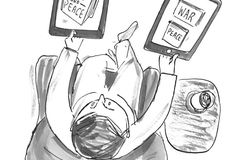 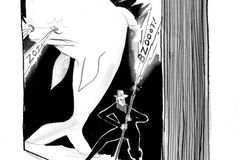