The first print run of cookbook author Greta Podleski’s latest book, Yum and Yummer, was 150,000 copies. She published it herself, having done the photography on a folding table pushed up against her bedroom window because that was the best light source in her house. It took five days to print and seven transport trucks to move the books from the printer to her warehouse.

That was in the fall of 2017. Since then, her book has been reprinted twice, and has sold over 310,000 copies. In Canada, any book that sells more than 5,000 copies is considered a bestseller, although no one in the business seems to know where that number came from. Yum and Yummer (a play on the movie title Dumb and Dumber) was the top-selling cookbook of 2018 in Canada, even compared with new releases by Jamie Oliver, Ina Garten and Yotam Ottolenghi, and all books vegan, keto and Instant Pot. As I write this, Yum and Yummer is the No. 5 book overall on Amazon.ca, in the company of Michelle Obama’s Becoming and Mark Manson’s The Subtle Art of Not Giving a F*ck.

Yet Podleski didn’t even consider working with a publishing house, having been turned down by every one she and her sister Janet approached back in 1996, when they had an idea for a humorous illustrated cookbook called Looneyspoons: Low Fat Food Made Fun. Having quit their jobs to write the book, Greta was down to $1.12 in her bank account and the pair were desperate for a way to get their book onto store shelves when they met and partnered with David Chilton, self-published author of The Wealthy Barber. They went on to sell 850,000 copies – if you count the three titles that followed, plus Greta’s latest, they’ve collectively sold more than 2.5 million.

“In hindsight, being rejected by those publishers were the biggest blessings in disguise of my life,” Podleski said. “If we had landed that big publishing deal we were dreaming of, we’d be back at our day jobs right now. Two authors could never survive financially by sharing a modest author royalty.”

In a nutshell, this is how publishing works: an aspiring author pitches a book idea to a publishing house (or hires an agent to do it on her/his behalf), or a publisher approaches an author they’re interested in working with; if and when both parties agree to the topic and terms, the publisher pays the author an advance on book sales (since the manuscript takes a year or two to complete, and authors need to live), and then covers the cost of the book production and printing, takes care of the warehousing and distribution (filling and shipping orders) and some level of publicity. The author gets a royalty – typically 10 per cent to 15 per cent (of retail or net price, depending on the publisher) – twice a year, once the author has earned out her or his advance. In a self-publishing scenario, the author takes on all of these tasks, and expenses, themselves, often enlisting a distributor to help with warehousing and order fulfilment. But they also get to keep all of the profits, rather than take a percentage of sales. There are a few business models that fall somewhere in between – for example, authors who partner with Figure 1 Publishing in Vancouver pay to have books produced on their behalf.

When Podleski published Yum and Yummer (under her imprint: One Spoon Media), her first invoice from the printer was just less than $520,000. Then there was an additional $200,000 for other production costs: an editor, the book design, photography supplies, groceries and a short how-to video for every single recipe in the book – something she says no other cookbook has done before. The process took almost as long as writing the book, but now each recipe page contains a QR code that, if you hover your phone over it, will take you to a Tasty-style video to walk you through the cooking process.

This part of the cookbook is unique, and Podleski believes it’s an expense a traditional publishing house would never have taken on.

It’s notable that many of the biggest-selling cookbooks in Canada have been self-published: Jean Paré’s cerlox-bound Company’s Coming series, which launched in 1981, has surpassed 32 million book sales; Best of Bridge, which published its first in 1975, has sold more than four million. Whitewater Cooks, a series of five books by Shelley Adams, who at one time co-owned the Whitewater Resort in Nelson, B.C., and its well-known Fresh Tracks Café, is another series that since 2007 has outsold what most major publishers consider to be impressive numbers. Edmonton pastry chef Giselle Courteau’s stunning self-published Duchess Bake Shop cookbook went on to win gold in the 2015 Taste Canada awards for best single-subject cookbook. (Podleski won the same honour in 2018, in the category of Health and Special Diet cookbooks.) Besides the Podleski sisters partnering with Chilton, none of these authors had any publishing experience. None was a celebrity chef, had Food Network shows or a massive Instagram following, and yet, they’ve sold astronomically high numbers of books.

"Each year there are some titles like these among the top-selling cookbooks,” says Dave Reynolds, associate category manager overseeing local authors in Western Canada at Chapters Indigo. “There’s a stigma only if they look self-published – I think people expect cookbooks to be beautiful, it’s a big part of their charm.”

Timing has been a factor in many of these self-publishing success stories; in the seventies and eighties, only a handful of new titles came out each year – most cookbooks were community compilations and recipes were shared between friends or clipped out of newspapers and magazines. There was the pioneering of non-traditional retail markets: In the beginning, Jean Paré drove around rural Alberta with a trunk full of cookbooks, selling them at gas stations, drug stores and lumber yards. Podleski says they had a more focused and attentive audience before social media started pulling people in more directions, and theorized that making publishing their full-time business made a difference to their success – they didn’t wind up just one book among hundreds in a publisher’s catalogue, pushed for a few weeks when it’s released, and then backlisted.

“Print cookbooks are never going away,” Greta says. “You can swipe recipes on your iPhone all you want, but people love to hold a cookbook. They like to put it on the countertop, make notes in the margins, drip batter and olive oil on it. People keep and cherish those books and hand them down for generations.”

There are more books competing for that kitchen shelf space: With a greater interest in food and cooking, more people writing about it and cheaper printing costs, bookstores are saturated with hundreds of new titles a year. In an increasingly competitive market, one in which book retailers can simply return to the publisher any books that don’t sell, cookbook authors have the added expense of ingredients and food stylists for their TV spots and promotional tours, and are also competing with an endless source of free recipes on the internet. Consumers are still buying them, but it can be a risky investment.

“Publishing is not for the faint of heart, or the light of wallet,” says Nancy Wise, author of How to Self Publish and Make Money (with Marion Crook) and founder of Sandhill Book Marketing, which specializes in marketing and distribution for small press and independent publishers, including the Whitewater Cooks series. "I think it’s very difficult for those new to the book industry to grasp the whole concept of publishing and what that entails. It’s not just having an idea for a cookbook, or writing it, but the many steps it takes to bring that finished, printed book to market, and then to the attention of the consumer.”

The original books in Jean Paré’s Company’s Coming series, which comprises hundreds of individual titles, are still its biggest sellers. Her first cookbook, 150 Delicious Squares, has sold more than 1.5 million copies alone – it’s still in print, and the company says it performs like a new title. Cookies has sold almost a million copies, and Slow Cooker Recipes and Muffins and More have also been blockbuster hits.

A classic from the first Company’s Coming cookbook: 150 Delicious Squares, published in 1981.

Top layer: Beat eggs and second amount of sugar until light and thick. Add the rest of the ingredients. Stir and spread over bottom layer. Bake in 350 F (180 C) oven for about 30 minutes, or until centre is almost firm. Cut into 36 squares when cool.

If you’ve got a favourite recipe from Company’s Coming, e-mail it to jpereira@globeandmail.com.

What makes a great cookbook? A generous serving of storytelling, personality and philosophy
Subscriber content
June 1, 2018 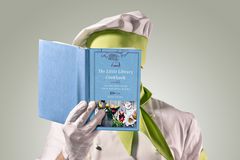 What are the essential cookbooks I should have in my kitchen?
Subscriber content
November 28, 2018 Cookbooks of the past offer food for thought on Canada’s national cuisine
June 27, 2018 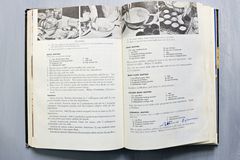