Less than seven weeks out from its 91st annual awards extravaganza, the Academy of Motion Picture Arts and Sciences looks, politely, like a tire fire.

In September, the organization bungled its rollout of a “most popular” Oscar category, quickly conceding it was a pointless idea. In May, it ousted such disgraced men as Roman Polanski and Bill Cosby, yet it’s unclear whether it will do the same should convictions be laid against members such as Kevin Spacey or Brett Ratner. The Academy’s own president, John Bailey, faced allegations of sexual harassment last spring (which have since been dismissed after an internal review). And despite playing a protracted public-relations game with Kevin Hart, the Academy Awards are still without a host for this year’s ceremony.

So far, so terrible. But then on Sunday night, Bohemian Rhapsody won two “unexpected” awards at the Golden Globes, including best actor for Rami Malek and best motion picture (drama), catapulting the film into a legitimate Oscars front-runner. That “whoooooosh” noise you just heard was a can of gasoline being emptied onto the now-raging inferno that is the Academy Awards. It all leads to the question: Are you ready for the Most Problematic Oscars Ever?

On the Bohemian Rhapsody front: While audiences have been flocking to the Freddie Mercury biopic (current worldwide box office: US$743-million, or nearly twice the amount earned by presumed sure-thing Solo: A Star Wars Story), its performance Sunday night underlines a sad if not shocking truth about Hollywood. Namely, that no one cares about anything. Other than money, of course.

The film itself is a wash, a pandering and disrespectful portrait of a complicated man and artist that all but erases his queerness for the sake of placating four-quadrant crowds. But plenty of bad movies have won Golden Globes, and Oscars, too. What is more troubling is the fact that the film arrived in today’s #MeToo and #TimesUp climate – an era when power players and gatekeepers across the industry have pledged real change – courtesy (sort of) director Bryan Singer.

In December of 2017, Singer was accused of sexual assault by Cesar Sanchez-Guzman, citing an alleged 2003 incident when Sanchez-Guzman was 17. In 2014, former child actor Michael Egan claimed in a lawsuit that the director sexually assaulted him in 1999. Egan later withdrew his suit, and Singer has denied all the accusations.

A few days before Sanchez-Guzman filed a lawsuit against Singer, the director was fired from Bohemian Rhapsody by 20th Century Fox, with the studio citing the “unexpected unavailability” of the filmmaker during production.

Singer denied that he acted unprofessionally, and countered that Fox refused to allow him to balance family obligations with production. “I wanted nothing more than to be able to finish this project and help honour the legacy of Freddie Mercury and Queen,” Singer said in a statement at the time, “but Fox would not permit me do to so because I needed to temporarily put my health, and the health of my loved ones, first.”

Fox hired director Dexter Fletcher to complete filming, but Singer retained his directing credit – even if his name was not uttered once at the Golden Globes. When asked backstage about Singer, who did not attend Sunday night’s gala, Bohemian Rhapsody producer Graham King said, “That’s not something we should talk about tonight.”

So if not Sunday night, then when? On the eve of the Academy Awards, perhaps, now that Bohemian Rhapsody is all but guaranteed a best-picture nomination? (To those doubting the Globes' influence on the Oscars: Academy members only started casting their nomination ballots Monday, the day after the Globes ceremony, and historically align their sensibilities accordingly.) The answer, more likely, is never – especially if we’re trusting the Academy Awards to stand up where the Golden Globes fell down.

Seemingly unable to get its own house under order, the Academy cannot be trusted at this point for anything beyond lip service. And even that weak gesture is questionable, given that the organization had a chance to make an impact last year, and host Jimmy Kimmel mostly whiffed the opportunity.

Why should we expect more this time around, especially if the Academy is still reportedly flirting with Hart, whose various non-apology-apologies for past homophobic remarks have only underlined the fact that so few in Hollywood want to affect real, progressive change.

At this point, barely a year after the Harvey Weinstein allegations provoked a seemingly genuine cry for change, we’re that much closer to the Oscars becoming a showcase for silence. 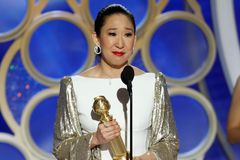