Officially, this year’s National Canadian Film Day arrives Wednesday. But you could just as easily make the case that this past Monday marked the real celebration, given how much attention the federal budget paid to aiding the country’s film industry.

First the good news, because there is a surprisingly large amount of it. After decades of operating with a static budget – despite the movie business evolving and reconfiguring itself at a rapid pace – Telefilm Canada’s pleas for more resources finally got answered. Over the course of the next three years, the federal funding agency will receive $105-million in new funds: $20-million in the first year, $35-million the next and $50-million the third. Given that Telefilm’s current appropriation is $100-million, the announcement effectively increases the organization’s budget by 50 per cent in the third year.

Ottawa outlines that the new Telefilm funds are to “modernize its current suite of programs to provide better access to a diverse range of creators and producers, support green practices and respond to increasing digitization in the audiovisual industry.”

How this will actually play out is as good a question as any, especially as hours before Finance Minister Chrystia Freeland dropped her budget, Telefilm announced that its “pan-Canadian consultations” had officially concluded – meaning that the way Telefilm produces and promotes Canadian cinema is set for some serious, or at least serious-minded, changes this year. (The results are set to be unveiled this summer.)

More good news, pending details, was found in Ottawa’s commitment to give $60-million over three years to the Canadian Media Fund, focusing on supporting “productions led by people from equity-deserving groups.” And in a big vote of confidence for the rising Indigenous Screen Office, which was launched just in 2017, Ottawa pledged $40.1-million over three years to support the ISO and “ensure Indigenous peoples can tell their own stories and see themselves reflected on-screen.”

The budget took space to highlight the Short-Term Compensation Fund, an insurance initiative designed to help film and TV producers keep their lights on if a COVID-19 case temporarily halts production. But because the STCF was previously announced in the fall and re-upped this past February, its mention this budget is more a self-congratulatory note from the Liberals to themselves.

Naturally, the industry is pleased, from the Canadian Media Producers Association (“An encouraging step forward,” said president and chief executive Reynolds Mastin) to Telefilm (“We greatly welcome this news,” said executive director and CEO Christa Dickenson) to the ISO (“So many have worked so hard for this moment and the moments to come,” said executive director Jesse Wente). And after the year that this industry had, it can use any hint of better days it can get.

But there is little in the budget to aid the one part of the domestic film industry that has been absolutely essential to the sector since time immemorial, at least until now: movie theatres.

Despite noting that “cultural experiences are central to our well-being,” the budget has seemingly cast aside struggling cinema operators, which, perhaps because they’re not threatened by foreign investment, seem to be completely expendable. Ottawa has pledged $200-million to “support major festivals”; another $200-million for “community cultural events, outdoor theatre performances, heritage celebrations, and local museums”; up to $50-million for the live-music sector; and $23.2-million to the National Arts Centre alone.

Perhaps there will be wiggle room for cinemas in the $15-million set aside to help “arts and heritage institutions upgrade their facilities to meet public-health guidelines.” Yet would those funds a) trickle down to exhibitors and b) genuinely help theatre-owners, who already revamped their operations during that brief window of time last summer when cinemas were permitted to operate?

We should be thrilled that there are dedicated federal dollars to support filmmakers, especially given the genuinely exciting developments on the creative side of the domestic industry. But there also seems to be little thought as to how those filmmakers’ work will be eventually viewed. Or maybe that’s just the thing. From Ottawa’s perspective, the future of Canadian film doesn’t include the future of Canadian movie theatres.

Let’s check back a year from now, then, on National Canadian Film Day 2022, when we realize that our living rooms just aren’t cutting it any longer. 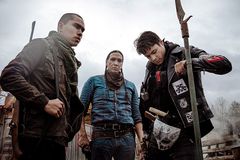 National Canadian Film Day aims for light at the end of the tunnel
Subscriber content
April 15, 2021