Fifty years ago this May, Toronto’s shiny new Cinesphere opened in the equally new Ontario Place with a breath-catching film spectacle that ushered in the era of Imax. The film was North of Superior, an 18-minute ode to the wilderness of northwestern Ontario, replete with sweeping aerial shots using the new Imax technology that enveloped viewers within the Cinesphere’s 18-metre-by-24-metre screen and sent them soaring dizzily above vast lakes, mountains and forests.

The director and cinematographer was Graeme Ferguson, who admitted to never having been north of Lake Superior prior to making the film. Among those helping him get the lay of the land and connect with the locals was a young Indigenous woman named Phyllis Wilson.

A few years later, Mr. Ferguson would be back in the region to assist in making another, non-Imax documentary for the National Film Board. Only this time, the director would be Ms. Wilson and the subject was one close to her heart. Nishnawbe-Aski: The People and the Land could almost be a granular sequel to North of Superior. Where the first film touched briefly and without comment on the Indigenous people of the area, Ms. Wilson’s took a deeper dive, profiling four Cree and Ojibwa communities and celebrating their way of life, while also revealing the threats they faced from commercial development.

Ms. Wilson – who would eventually marry her mentor and become Phyllis Ferguson – belonged to the Algonquins of Pikwàkanagàn First Nation. Although later she would join her husband in making more high-flying Imax movies, those shot onboard NASA’s space shuttles, she remained a down-to-earth woman who never forgot her roots.

“She walked into any room and you’d know she was Indigenous,” Lindsay Morgan, one of her lifelong friends, recalled fondly. “Usually she was wearing jeans and a plaid shirt. It didn’t matter the occasion. She and Graeme once had lunch with the queen of Sweden and I would like to think she wore a dress,” she added, laughing. “With Phyllis, there was never any effort to pretend she was anyone else.”

Ms. Ferguson, who died on March 12 in Toronto of heart failure at the age of 70, was also quiet, gracious, not one to toot her own horn. While she worked with NASA’s astronauts, met royalty, travelled the world, she seldom talked about it – much less boasted – during her yearly trips back to her hometown of Thunder Bay. Instead, she was more interested in bringing together her large extended family and checking in on everyone’s well-being.

“She always looked around to see which one in the family needed her help,” her aunt, Ruth Martinsen, said. That help might be financial aid, if someone was trying to further their education, or just a sympathetic ear and some good advice.

Ms. Ferguson had every reason to cherish her family. Born in the bush in Quetico, Ont., on Nov. 11, 1950, she was named Phyllis Marie Wilson in honour of her maternal grandmother, Phyllis Tenniscoe, who delivered her and would later become her substitute mother. Her birth mother, Joan, was single and abandoned Phyllis as a child. At the age of 12, Phyllis was sent alone on a Greyhound bus from Edmonton, where they were living, back to Ms. Tenniscoe.

“My mother had a very open and welcoming home, even though we were poor,” her daughter Margaret Tenniscoe said. “There was always space for one more.” She had 19 children of her own, several still at home, but she brought Phyllis into the fold. If the child’s early experiences had scarred her in any way, it didn’t show. Margaret, who was a year younger, remembered her “cousin” Phyllis as “outgoing and enthusiastic and always brave to try new things.”

Phyllis attended high school at Port Arthur Collegiate, where she was an avid basketball and volleyball player, but also loved to muck about with audio-visual equipment. There, she made another lifelong friend in Beverly Sabourin. While Ms. Sabourin would go on to a distinguished academic career, eventually becoming vice-provost of aboriginal initiatives at Lakehead University, at that time she was a shy girl from the reserve who felt like a fish out of water in a city school full of rich white kids.

“If I hadn’t met Phyllis, I don’t know if I would have stayed in school,” she said. “She took me under her wing in her own quiet way.” The two became pals at Port Arthur and both went on to attend Confederation College, where Phyllis enrolled in the school’s newly created radio and television program.

By then she was living with the Morgans. Lindsay and her husband, David, who taught economics at the college, had originally hired Phyllis as a babysitter for their three children, but when life got tumultuous in the Tenniscoe household, they invited her to move in.

It was thanks to the Morgans, who knew the location manager for North of Superior, that she found herself working on the film. In the process, she fell for its director. At the time, Graeme Ferguson was 41 and still married to his first wife, avant-garde filmmaker Betty Ferguson. Phyllis was 20 years younger.

“I remember saying, ‘Phyllis, he’s too old for you!’ She totally ignored me,” Ms. Sabourin remembered with a laugh. “It was a match made in heaven for the two of them. They turned out to be a really amazing couple.”

After the shoot, however, Mr. Ferguson returned to run the fledgling Imax company in Toronto, while the young Phyllis Wilson embarked on a broadcasting career. She hosted a local TV show in Thunder Bay, did a stint behind the microphone with CBC Radio in Whitehorse and worked for a time on an Indigenous community newspaper in Ottawa. She returned to television to serve as a location manager on two major national news programs, CBC’s The Fifth Estate and CTV’s W5.

She and Mr. Ferguson worked together again on the Nishnawbe-Aski project – while she directed and narrated, he did the camerawork. The half-hour documentary, released in 1977, was a labour of love, made pro bono to help the Treaty 9 communities in their fight against the exploitation of their ancestral lands.

In 1982, after a decade-long relationship, Mr. Ferguson and Ms. Wilson married. That same year also saw their next collaboration, Hail Columbia!, the film that launched Imax’s landmark series of documentaries about NASA’s space missions. The Fergusons, along with editor-writer Toni Myers, formed the core team behind the first five movies, which put audiences inside the space shuttles and international space station. Although NASA had initially been wary of working with a third-party film company – and only allowed an Imax camera aboard a shuttle for the second film, 1985′s The Dream is Alive – the movies’ great popularity soon had astronauts lobbying for screen time.

“Phyllis would hang out in the cafeteria at NASA and astronauts would come up to her and say, ‘How do I get Imax on my flight?’” her stepson, NFB director Munro Ferguson, said. “They were pretty enthusiastic about shooting Imax footage, even though it was an extra duty.”

Formally, Ms. Ferguson was the associate producer on the films, which also included Blue Planet (1990), Destiny in Space (which she also co-directed; 1994) and Mission to Mir (1997). Informally, she was the Imax team’s diplomat, whose unaffected style was key to winning the trust of the astronauts. The ice breaker came right at the start, while shooting a press conference with Columbia’s commander, John Young, and pilot Robert Crippen. After a succession of solemn, scientific questions from major media outlets, Ms. Ferguson simply asked the pair, “Is it fun to be an astronaut?”

“It just broke the tension,” said Imax creative director Jackson Myers, son of the late Ms. Myers. “You can see this super-wide smile on Bob Crippen’s face. Then they both completely let their guards down and start talking about how fun it is. It changed the whole mood.” That was classic Phyllis, Mr. Myers said. “She’d just ask what she thought.” He said that display of genuine curiosity helped establish Imax’s 40-year-long relationship with NASA. “The astronauts came to see her and my mom and Graeme as the right people to tell their story.”

After Imax was sold in 1994 to U.S. investors, the Fergusons left Toronto to settle at their summer retreat, Lake of Bays in Muskoka, where they owned a large historic cottage on Norway Point. Ms. Ferguson devoted herself to community causes and hospital fundraising, as well as to a newfound love of golfing. When she wasn’t on the links, she was entertaining their many guests or playing with her beloved black Labradors, Naiad and Pixie.

Ms. Ferguson fell ill early in 2021 and was being treated at Toronto’s Mount Sinai Hospital when she died. She leaves her husband, Graeme; stepchildren, Munro and Allison Ferguson, and their families; and her many Tenniscoe relatives.

She was and remains an inspiration for younger generations, a trailblazer when being an Indigenous female filmmaker was a rarity. “Now there’s a lot of interest and a big demand for Indigenous film in Canada,” Munro Ferguson said. “Phyllis was ahead of her time.” 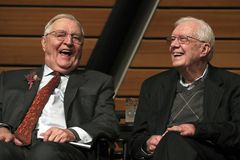