The big takeaway from this week’s cancellation of Montreal’s World Film Festival is that this beleaguered event is truly a one-man show. Not a single film had been selected for a week-long affair that was to have started on August 23.

The reason given, in Monday’s terse announcement, was that Serge Losique, the festival’s 87-year-old founder-director, is suffering from “extreme fatigue.” Another annual shindig might have been able to work around ill health at the top through the efforts of other senior staff and staff hired to choose and secure films.

But when Mr. Losique is out of action, the WFF is paralyzed. To say that the 43rd edition was cancelled is an overstatement. In practical terms, there was nothing to cancel.

“It has been a question mark for some months,” Mr. Losique’s son, François Beaudry-Losique, told Le Journal de Montréal. Mr. Beaudry-Losique is also director of the Imperial Cinema, the festival’s headquarters and gala venue.

Mr. Losique put a positive spin on his news, saying through a spokesperson that the one-year break would allow him “to better prepare for the 2020 edition.” As the saying goes, il faut reculer pour mieux sauter – a step back yields a stronger jump.

A last-minute rush to pull a festival together is almost an annual tradition at WFF, which typically announces its selected films much closer to its opening than other, similar events. According to its website, the event’s usual complement is “some 400 films from 80 countries.” One wonders whether Mr. Losique was still imagining, two or three weeks ago, that such a trick could still be accomplished in time.

The website, which has not been updated since last year, also boasts that the WFF is “the Quebec cultural event the most widely covered around the world.” If that claim holds any truth, it is because no other cultural event in Quebec has survived so many colourful near-death experiences.

The most spectacular took place in 2016, when on the eve of the festival’s opening, most of its staff quit en masse and Cineplex withdrew all of its screens. The event still took place in an amputated, improvised form. Several filmmakers arrived to find that their works could not be shown after all.

Last year, Revenue Quebec asked the Quebec Superior Court to shut the festival down for non-payment of a tax debt of nearly $500,000. The court leniently ordered Mr. Losique to pay $32,000, or about 6 per cent of the amount owing.

In 2017, Hydro-Quebec cut off power at the Cinema Imperial for lack of payment. Quebecor stepped in and purchased the property, which the WFF had received as a gift from Cineplex in 1995, but which Mr. Losique had mortgaged away.

One significant reason for these money-related troubles is that the public bodies that used to provide funds – Telefilm Canada, the provincial Société de développement des entreprises culturelles (SODEC), the City of Montreal and Tourism Montreal – all defected in 2014. SODEC is also seeking relief in court for $886,000 in unpaid loans to the festival.

In its early years, the WFF was considered the equal of Toronto’s Festival of Festivals, forerunner of the Toronto International Film Festival. The Globe and Mail’s Jay Scott made a point-by-point comparison in 1983, concluding that the Montreal event was both feistier and more controversial in its choices. Unlike TIFF, the WFF has always included a juried competition.

Mr. Losique attacked the Toronto festival in 1986, accusing it of inflating its attendance numbers. That charge seems almost quaint today, considering the gargantuan event that TIFF has become.

The WFF, meanwhile, has dwindled to “no more than a shadow of a shadow of its former self,” as Guillaume Bourgault-Côté wrote in Le Devoir. Quebec media have regularly predicted the WFF’s demise, but Mr. Losique has always managed to dismiss the gravediggers.

The Montreal scene has become crowded with film festivals, including the Festival de Nouveau Cinéma, the Montreal International Documentary Festival and the genre-oriented Fantasia festival, which is now under way. All of these events have whittled away at the WFF’s claim to be Montreal’s window on the international film scene.

“The great majority of cinephiles have for years considered [the WFF] to be clinically dead,” Marc Cassini wrote in La Presse. But others took Mr. Losique’s claim of being focused on 2020 as a hopeful sign.

“It could be a chance to rebuild a festival with broader support and to rethink its future,” said Hélène Messier, director of the Association québécoise de la production médiateque. “I don’t see this as bad news.”

Perhaps, but Mr. Losique has never before taken up suggestions from outside that he might go about his business differently. The various public bodies that used to give the WFF support all sent him signals, sometimes over a span of years, that he needed to run a more transparent, financially responsible event.

In 2004, for instance, Telefilm bluntly said that he would have to “revamp [the festival] altogether,” in order to continue receiving a $500,000 grant from the federal agency. Telefilm withdrew funding that year to back the ill-fated New Montreal Film Festival, but waited another decade before banishing the WFF for good.

The WFF has become such an unpredictable, harum-scarum jamboree that Mr. Losique will probably not lose much ground, if he can indeed make a resurgence after this fallow year. There are no funding agencies to placate for missing an edition.

If nothing else, the WFF will always be able to count on its notoriety. The festival’s many recent disasters made for great copy and were followed by many more people than Mr. Losique could expect at his screenings. In that sense, the show still goes on, even when the festival doesn’t. It’s not over until Mr. Losique says so. 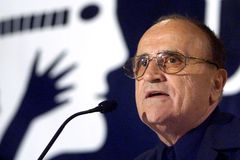