When Carey Mulligan got the call from her agent that a project about the suffragette movement in England was in the works, she thought to herself, "Oh no, not another period drama." You know the sort: swelling music, corsets, Colin Firth. "I was expecting a script about polite, upper-class women drinking tea," Mulligan says over the phone, "but then I read the script and was shocked by what was in it."

It took only 10 minutes into her first meeting with director Sarah Gavron for Mulligan to be convinced that this particular backward glance was not going to be a typical historical melodrama. Gavron's film, written by Abi Morgan, would focus on the police brutality these radical women faced as they amped up their militant efforts in the name of women's right to vote. By that point, Mulligan says, "I was texting my agent under the table saying, 'I've got to do this thing.'"

Gavron made good on her promise, and in Suffragette we meet the hunger-striking, arsonist agitators behind the movement. The director drops the saccharine music so common to biopics and Oscar hopefuls, and instead has her camera march with the women at ground level, like another member on the front lines.

"We chose that 16-month period when militancy was at its height and the state at its most brutal. … It's not widely known the lengths to which these women went and the brutality that they faced," Gavron says.

"We have this conception in the U.K. of the suffragette movement as the Mary Poppins, Mrs. Banks version of it – crinoline-dressed women, polite and jolly. The truth is, it was a vast movement that brought women together across classes. You had a lot of working-class women in the movement and they had, in a way, so much more to lose. Working-class people are so often at the vanguard of change."

Suffragette has little time for even the best intentions of the movement's bourgeois women – this is the story of London's working poor.

Mulligan's lead performance as the disenfranchised Maud Watts, a laundress thrust into the heart of the movement, is impeccable. She is wary of the suffragettes at first, but one by one her scruples – never before tested or examined – fall away and are replaced by a new, collective rage.

The suffragettes target their attacks to damage the sacred idol of property, breaking store windows and setting unused buildings aflame to capture the attention of a dismissive Parliament. As Maud explains to a detective (Brendan Gleeson) who has been surveilling the women: "War is the only language men listen to."

Why does the film focus on the suffragette movement at the peak of its militant efforts? "Because, as many can argue, it was the straw that broke the camel's back," Mulligan says. "It was a time when people couldn't ignore the women's movement any more because they had been peacefully campaigning for 40 years."

Of casting such a range of talents from Mulligan to Anne-Marie Duff to Helena Bonham Carter, Gavron says: "It was about getting the alchemy right and putting together this eclectic mix of women" that mirrored the wide range of generations and personalities in the movement itself.

Bonham Carter, who plays a pharmacist and key agitator in the film, was also eager to join the project and has a connection to the original suffragettes. "Helena has a funny personal history because she is the great-grandchild of [former prime minister] Herbert Asquith – an archenemy of the suffragettes at the time – and then her grandmother Violet, Asquith's daughter … had no sense of what it was like to be unequal," Gavron says.

With this hostility to the cause of women's suffrage in the Bonham Carter family tree, the director was "trepidatious" when she met the actor in a café in North London to discuss the film. But Bonham Carter had brought her grandmother's diaries to the meeting and declared that she was "all up for having a posthumous conversation with [her] great-grandfather."

But if you're looking for Meryl Streep (aren't we always, in each our own way, looking for Meryl?), don't blink. Apart from her portrait looking over the women as they fold pamphlets, chart their marches and plot their battles, the actress appears as militant suffragette Emmeline Pankhurst for one brief, rabble-rousing speech. Even though we don't see much of her, Streep's star power aligns with Pankhurst's celebrity so much so that when they come together in one figure, they are like a ghostly matriarch presiding over the film, letting the foot soldiers of the movement get their due.

Gavron's camera also takes us behind the prison walls, where suffragettes and their "indecent morality" were hidden from public view. There, many of them chose to go on a hunger strike in protest against their treatment and living conditions.

The director says the women's "hunger-striking is an aspect of the story that isn't widely known in terms of what these women endured. They went to prison for weeks and sometimes months on end and would hunger-strike, and they were there when the government began to force-feed them – which we now know is a form of torture. We were reading these unpublished diaries and letters and accounts written by these women describing very viscerally what it was like to be in prison."

There is a moment in Suffragette when Mulligan's hunger-striking character, lips angrily pursed and arms tied behind her back, is force-fed by a doctor and prison officials. The scene recalls Steve McQueen's Bobby Sands biopic Hunger. Mulligan, who worked with McQueen on his 2011 film Shame, agrees about the comparison, adding, "We wanted it to feel real and not to hold back on that. There was one suffragette who was force-fed 48 times. Sarah very cleverly cast stunt men and women as the guards around me so that I could kick and turn myself around and I wouldn't hurt anyone and equally I wouldn't hurt myself."

Another surprising layer to the film is its tracing of the beginnings of Britain as a surveillance state. Gleeson's Detective Steed tracks the movements of Maud and the other rebels throughout London, breaching their privacy in the name of security. Gavron explains that when the British police archives were opened up in 2003, they revealed that in 1912 "the surveillance operation really was the first of its kind. The police were making requests for new photographic lenses that could catch the women from a greater distance, they were taking the cameras off their tripods to get better shots," and were "using cameras in ways they never had before."

Discoveries such as these make Gavron the real sleuth, uncovering stories that maybe some would prefer stay buried in historical footnotes. But Mulligan says that, working on the film, "there was a sense that we were the women who were going to get [to] tell the story, finally. After a hundred years, to have the privileged position of telling the story of the suffragettes there was a real excitement. … There was something special about largely a group of women who were the ones to do it."

In the early weeks of its marketing, Suffragette took a public relations misstep when the cast, including Mulligan and Streep, posed for Time Out London in T-shirts emblazoned with the Pankhurst quote "I'd rather be a rebel than a slave." Understandably, critics read the use of the word "slave" as tone-deaf to the racial tensions of our contemporary moment and to the history of slavery.

"It's important to have these conversations and to check in with one another about where we stand," Mulligan says in regards to the controversy. "The danger is that it was going to cloud the main intention of the film, which was to tell a story about these incredible women and by doing it empower women today and empower people to take action. [Suffragette] was a wholly positive effort and that the point should be sidetracked by one T-shirt would be such a shame. … We didn't want that to become the whole story behind the film."

Both Mulligan and Gavron hope that the out-of-context quote will not detract from the film's message of political and collective action. Yet what the T-shirts brought to the fore was the fact that this film is, undoubtedly, a very white one, telling the story of some women's liberation, not all.

To this, Gavron – whose intersectional feminism runs deep – replies: "What's important to remember about this movement is [that] we are telling the story of a two-and-half-mile radius in London in 1912."

The actor adds that "working with Sarah … has me thinking a lot more about starting to get stuff made and maybe bringing stories to directors – not necessarily just for myself – but being involved in trying to make more serious stories about women. At a certain point, you've got to stop waiting around and try to generate work for yourself." 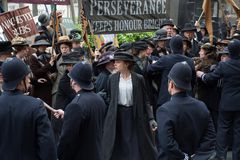