Tim Roth wanted something. He had just arrived at the Muskoka, Ont., set of the romantic thriller October Gale, written and directed by Ruba Nadda, now playing in select cities. Patricia Clarkson was playing the lead, Helen, a doctor feeling her way back from the sudden death of her husband. Scott Speedman was playing William, a stranger who appears at Helen's island cottage, bleeding from a gunshot wound, during a storm. Roth was playing Tom, whose late arrival is bad news for the other two.

It's a tenet of screenwriting that each character in a scene has to want something. It's a fact of filmmaking that each person on a set wants something, too. Roth wanted to punch Clarkson in the face. Or rather, he wanted Tom to punch Helen in the face. But it amounts to the same thing.

In the script, Tom was supposed to grab Helen's arm. But Roth is nothing if not persuasive. "Darlin', darlin', I've got a fabulous idea," he said to Nadda. "I want to punch Patricia – do you think she'd go for it?"

Luckily for Roth, his request dovetailed with what the other three wanted, they told me in interviews. In one hotel room sat Speedman, 39, the Toronto-raised actor (Barney's Version). His face had a sharper outline than it used to, his voice was husky, his manner reticent (he admits that interviews aren't his bag). But when he grinned, he was still the charmer who made young Felicity swoon in the late-nineties TV series of the same name (which remains his most famous gig).

In another room sat Clarkson, 55, the sloe-eyed, honey-voiced actress who has worked with everyone from Martin Scorsese and Woody Allen (Shutter Island and Vicki Cristina Barcelona, respectively) to the Broad City duo; and Nadda, 42, the Montreal-born writer/director (Inescapable). Nadda and Clarkson also worked together on 2009's Cairo Time and the vibe here was giddy girlfriends. The two sat shoulder to shoulder, finished each other's sentences, heaped praise on each other and reminisced about the demands of shooting on water. Here's how they talk:

Nadda: There were brutal days.

Nadda: 16-hour days. Our budget kept changing. We had 30 days, then 21. The lake was still frozen. … We couldn't afford computer-generated imagery so we shot in a real storm.

Clarkson: It's all real, the fog, the lightning –

Clarkson: In that little skiff! That was a rough moment. Whoo, doggie!

Nadda: I was like, "It's authentic to throw you into the lake." It was so cold, two minutes and hypothermia.

Clarkson: I'm more athletic than people know. I can run, I can swim.

Nadda: She looks delicate but she's not.

Clarkson: Hey, I love your earrings.

But back to Roth's punch, and what the actors and their director wanted. Nadda wanted to evoke a Hitchcock vibe (my reference, not hers), to craft a love story masquerading as a thriller. She wanted to be true to the rhythms of a woman suffering loss and grief: "There are times when you don't think that you can move on, or that you want to." She also wanted to dramatize the moment when the will to survive surges up and takes over. "That will is so vicious. What I want audiences to take away from that is: Yes, you want to live."

As well – this is crucial – Nadda wanted Helen to save herself. "So often you see movies where women only get through challenges with the help of a man," she says. "It was important for me to depict a woman pulling through herself, independently." So Nadda was pro-punch.

Clarkson was, too. "I said, 'That's brilliant,'" she remembers, laughing. "It's shocking, because we rarely see it. It's controversial, because it happens. And as women, we're rarely called upon to be a physical force on screen. Even if we have a deep emotional journey, we rarely have a physical one, unless we're doing X-Men or something. So it was great."

As well, Clarkson wanted to deploy her considerable gifts over an entire movie, as opposed to the cameos she is often asked to do. "A character like Helen is a fantasy for a woman my age," she says. ("In your hot-early-50s," Nadda chimes in.)

"It's everything we want to be on screen, and rarely get to," Clarkson continues. "I can call upon all my strengths. I want that at this point in my life. I've lived this long for all that to be present in me."

Clarkson also wanted Helen's loneliness to ring true. "I know loneliness," she says, "because I have lived a somewhat solitary life. I've had extraordinary relationships with remarkable men." (She turns to Nadda: "You know some of them." Nadda grins and nudges her.) "And I value that," Clarkson goes on. "But I am a rather solitary woman. I wouldn't change that, but I know what it is to stand alone. I had to make sure that was present every day with me on this set."

What Speedman wanted had nothing to do with the punch; it was more about what he didn't do at the age of 23 when Felicity made him an instant heartthrob. "Notoriety and fame came a little young for me," he says. "I auditioned for a show – three days later I was on a set. I wasn't okay with going on Letterman, or saying, 'Here I am, put a $100-million movie on my back.' When my moment came, I just wasn't ready."

He wasn't entirely wrong to take it slow, he adds: "It's rare that I meet someone who's been at a certain level of fame for many years who isn't bonkers. I don't think our nervous systems are able to deal with that kind of notoriety."

But star-makers don't care about the health of one's soul. "Hollywood doesn't deal with ambivalence well," Speedman says. "They were like, 'Really? Next guy!' Ambivalence might be a good quality in an artist, but not in a businessman."

Working with Atom Egoyan on Adoration five years ago, however, fired Speedman's ambition. And frankly, he was "bored of watching people I don't think should get roles over me, getting roles over me." Now he is "jumping in, not being so precious. I'm turning 40 this year. I'd like some leading roles to come my way." Going mano-a-mano with the likes of Clarkson and Roth can't hurt.

There was something else all three wanted, something every film person seems to want these days: an HBO series. Clarkson and Nadda teamed with Alan Poul (Six Feet Under) to develop Elisabeth, a romantic drama set against the world of politics; it's still in the works. Speedman joined with Ryan Murphy (Glee) on Open, a drama about an open relationship; it didn't get picked up. The fact that the entertainment world has officially flipped – that any film person worth his or her salt is lusting for the creative freedom and big budgets of cable television – for cinephiles, that's indeed a punch in the head.

Q&A: Patricia Clarkson on her Canadian-made movie, filming in Georgian Bay and her hunky co-star
May 12, 2018 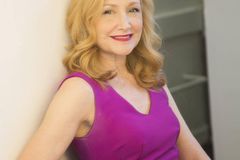 Film Review
October Gale: Canadian thriller builds up to nothing much
May 12, 2018 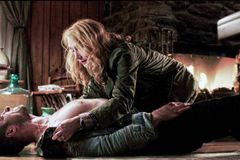 Dustin Hoffman and the power of collaboration
May 12, 2018 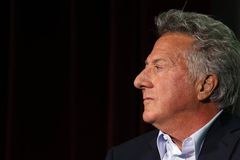