Luc Besson has a favourite saying. "There is a philosopher that has said, the child is the father of the man. It means that the child that you were teaches you how to be a man," the director says during a recent visit to Montreal. "It was the 10-year-old I was that taught me everything I am today."

From The Fifth Element to the upcoming Valerian and the City of a Thousand Planets, Besson has approached the future with an unusual optimism. Colourful and bursting with wonderment, Besson's cinema never forgets the dreams and magic of childhood, setting his films apart from the often ashen sombreness of contemporary science fiction.

First published in 1967, Valérian et Laureline is a French science-fiction comic created by writer Pierre Christin and illustrator Jean-Claude Mézières that depicts the adventures of Valérian and Laureline, two spatio-temporal agents in the 28th century. Sexy, playful and leftist, the series had a modern flare as it blended threads from classical literature with the imagined infinity of an ever-changing alien universe. Award-winning and commercially successful, the original series ended its run in 2010, several hundred adventures later. A favourite from Besson's youth, it served as a key influence on 1997's The Fifth Element, as the filmmaker borrowed its vibrant red-headed female character, planet-hopping narrative and resonant colour scheme.

Back in 1996, Besson had hired Valérian co-creator Mézières to work as a designer on The Fifth Element. Valérian and Laureline may have been Besson's favourite graphic novel growing up, but he never thought of adapting it until that day, after Mézières asked, "Why are you doing this stupid Fifth Element, why aren't you doing Valérian?" Returning home that night, Besson reread it and, the next day, he had an answer for Mézières: Adapting Valérian comics "was impossible."

Over the years, Besson started writing, but never thought he would be able to bring to the graphic novel to life. "There are basically three characters and 2,000 aliens," Besson explains, and the ambition of the project superseded all available technology.

"Then, with Avatar and James Cameron, the technology was there and he was kind enough let his knowledge to be shared with others. Then, Valerian was finally possible."

Whereas Cameron had just one species of alien, though, Valerian required many more. To create a truly wide spectrum of alien life, Besson turned to art-school students and frustrated VFX artists. Giving his artists carte blanche, each week they would present a new series of designs, reflecting the function and environment of the alien species. Their only contact with each other was through Besson, who pushed them to take risks and stretch their imaginations.

Not unlike The Fifth Element, which reimagined the Earth as a crowded metropolis of high-rises and eternal traffic, Valerian takes inspiration from metropolitan diversity. Besson proposes Manhattan: "You have the golden boy in a suit, the Pakistani in a turban, the chihuahua in the street. That's three aliens." Transpose that to the 28th century and you have the thousand planets of the film.

Within his work, Besson treats optimism as a philosophy. Even when faced with the destruction of the universe, his vision is sustained through hope that tomorrow might be better. With films such as Valerian, Besson creates a future he would like to live in: One that is full of life, imagination and beauty. He wants to help people "remember how they were when they were young." As with his characters, Besson always strives to believe in a better future for his children, even when that might seem impossible.

At the time of this interview, Donald Trump had recently pulled the United States out of the Paris Agreement on climate change, which Besson qualified as "probably the worst decision in human history."

Hyperbolic perhaps, but Besson believes that we have the power to write the future. His films don't cower from the darkness, but do not side with cynicism as Besson challenges the idea that escapism is synonymous with apolitical. "If you let me dream that tomorrow will be colourful and fun, I agree to live and agree to try," he says. "Don't take that from me."

Valerian and the City of a Thousand Planets opens on July 21.

Film Review
Review: Valerian and the City of a Thousand Planets has the best and worst of Luc Besson
July 20, 2017
The Globe guide to the 2017 summer movie season
April 6, 2017 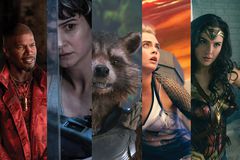 Mark Rylance learning how to deal with fame as Dunkirk hits screens
July 20, 2017
Follow us on Twitter @globeandmail Opens in a new window
Report an error Editorial code of conduct
Due to technical reasons, we have temporarily removed commenting from our articles. We hope to have this fixed soon. Thank you for your patience. If you are looking to give feedback on our new site, please send it along to feedback@globeandmail.com. If you want to write a letter to the editor, please forward to letters@globeandmail.com.
Comments