Everyone knows the default position on human organ trafficking. Illegal in every country except Iran, it's seen as a moral crime that ruthlessly exploits the penury of donors for the benefit of an affluent few.

Indeed, when Ric Esther Bienstock began work on her new documentary, Tales from the Organ Trade, that was her opinion as well.

But the further the Montrealer delved into the estimated $600-million-a-year black market – a clandestine universe of impoverished organ donors, seedy brokers who coordinate transactions, mercenary surgeons and desperately ill patients who pay as much as $100,000 for a kidney – the more her ethical certitude waned.

By the end, Bienstock had come to a different viewpoint, if not a definitive conclusion: "If I knew that I was going to lose my house and, by selling a kidney, I could keep it and save someone else's life, would I do it? I think I would."

The thorny ethical dilemma crystallized for her during filming in the Philippines. At one point, she writes in her director's notes, a young Filipino trying to sell his kidney lost his opportunity because the film crew's cameras "spooked the broker he was working with."

"Instead of feeling like we saved him from certain doom," she said, "I felt like our interference took away the only opportunity he had to better his life. It was … a game-changer for me. At that moment, I realized I wanted the film to take viewers on the same morally ambiguous journey I took."

Her resulting 82-minute film, narrated by David Cronenberg, opens at Toronto's Hot Docs Festival next week fresh from its world premiere in New Zealand, where it won best film in the Sign of the Times category.

Bienstock originally intended to study law. Recruited to assist with a documentary about AIDS in Africa, she fell in love with the medium. In the last 23 years, under the umbrella of Simcha Jacobovici's Associated Producers in Toronto, she has directed films on subjects as diverse as Ebola, single mothers, magicians Penn and Teller, pornography and sex slaves.

Her interest in organ trafficking was initially piqued by a casual aside. She was interviewing a man in Ukraine whose wife had been kidnapped and sold into the sex trade – the subject of Bienstock's last, Emmy-winning documentary. "He said to me, "I'd do anything to get her back – even sell a kidney,'" she recalled. "And I thought, 'what a weird thing to say.'"

Later, when she began her research, she discovered that other filmmakers had already explored the organ harvesting issue in depth, and wondered if she had anything new to say. But no documentary she'd seen had managed to assemble all the players involved in a single transaction – donor, recipient, doctors, broker. Bienstock set out to do just that, and, by spending most of her nearly $2-million budget travelling to eight countries, succeeded.

The kidney operation she chose was conducted in Kosovo, in a clinic subsequently shuttered by authorities. It involved a Canadian recipient who dispersed $100,000 among the various parties: the donor from Moldava, a 40-something woman who was paid $12,000; a notorious surgeon from Turkey dubbed "Dr. Frankenstein" in the press; the Israeli broker who facilitated the deal; and the American attorney who is still prosecuting alleged participants in an international organ harvesting ring in Pristina, Kosovo's capital.

She tracked them down, one by one, and persuaded them to do on-camera interviews.

Although there is organ trafficking in hearts, lungs and other human organs, kidneys are most in need. That's the result of diabetes and the burden posed by dialysis. But with diabetes rates soaring, the demand is expected to grow exponentially. Even if Westerners began signing organ donation cards in record numbers, it would not satisfy the demand.

Those who participate in the operation are candid and unapologetic. As Zaki Shapira, one of the assisting surgeons in the Kosovo case, tells Bienstock, "People want to live, and nothing can change this … When I know I can save a man's life, should I tell him I can't do it because it's illegal? How can I? Because it's illegal, you have to die? What is this?"

American lobbyist Robby Berman, who also appears in the film, endorsed that view. The current system, he insisted, has it backward. "The broker who breaks the law and gets caught has saved hundreds of lives," Berman noted. "I observe the law and I've let hundreds of people die. Who's moral and who's immoral?"

It's legal to donate a kidney for no money, he said. Why should it be illegal to be paid for it?

The problem, of course, is that in the unregulated black market, donors are typically destitute and may either be taken advantage of financially – in the Philippines, young men earn as little as $1,000 for their kidneys – or may develop post-surgical complications that leave them physically debilitated and without legal recourse.

"It's just not simple," Bienstock maintains. "Everyone is allowed to benefit. The surgeons, the nurses, the anaesthetist, the broker, the clinic – they're all paid. The only one not allowed to benefit is the donor."

"On the other hand," she added, "once money is part of the equation, it's no longer an ethically neutral transaction."

She hopes Tales from the Organ Trade initiates a serious conversation.

"Sex slavery was an easy concept, " she says. "There were no grey areas. Here, your viewpoint constantly changes. I'm not sure what the final answer is. I just hope the film makes people talk about the issue. I think that's all you can do." 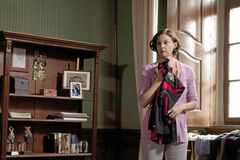 Centre of the doc universe
December 7, 2005
Professor says use of Cameron's and Fonda's names was 'a lame joke'
February 26, 2010
Follow us on Twitter @globearts Opens in a new window
Report an error Editorial code of conduct
Due to technical reasons, we have temporarily removed commenting from our articles. We hope to have this fixed soon. Thank you for your patience. If you are looking to give feedback on our new site, please send it along to feedback@globeandmail.com. If you want to write a letter to the editor, please forward to letters@globeandmail.com.
Comments