In the old television series Quincy, M.E., which ran on NBC from 1976 to 1983, Jack Klugman's titular, scrubs-wearing forensic pathologist was resolute and meticulous, with strong principles and an earnestness that often rubbed his stuffy, paper-pushing superior the wrong way. Every episode, it seemed, Quincy and his boss butted horns, but the thing of it was, Quincy's instincts were always right. I mean, every time.

In Concussion, a melodramatic but compelling enough lab-coat drama about football players and the pathological implications of too many blows to their heads, Will Smith is a forensic neuropathologist who discovers that repeated brain bruises can (and did, and do) lead to a condition called chronic traumatic encephalopathy (CET), which involves a buildup of proteins inside the skull that can cause severe dementia.

The movie is true (with requisite Hollywood embellishments, compositing and omissions), based in part on a 2009 GQ article by Jeanne Marie Laskas. Smith's character is Dr. Bennet Omalu, an extraordinarily educated Nigerian immigrant whose painstaking and unorthodox methods infuriate his supervisor. Indeed, Dr. Omalu is quite the quirky coroner: He talks to the dead, only uses scalpels once, listens to Teddy Pendergrass on his headphones while harvesting organs and stubbornly orders expensive tests when others wouldn't bother.

Based in Pittsburgh, Dr. Omalu – he constantly corrects people who fail to address him with the proper honorific; the lack of respect is a sore spot with him – is assigned to examine the corpse of Mike Webster, a legendary football warrior of the city's Steelers. He died in an awful state, and is played strikingly by the always-good David Morse. We see the retired offensive lineman demented, living in a truck and pleading to his doctor for help. He superglues his teeth, inhales god knows what, and electroshocks himself to sleep.

And when he dies of cardiac arrest, Dr. Omalu's annoying boss doesn't want the city's beloved footballer cut open. But the doctor himself insists. "I know how he died," he says. "I want to know why."

The why is the newly minted CET, and Dr. Omalu (with help from some and the discouragement of others) gets his discovery published in a medical journal. Turns out other players suffered from the same condition, causing delusions and depression that led, in some cases, to suicide. Confronted with the evidence that its game was killing its former players, do you think the billion-dollar league embraces Dr. Omalu's scientific conclusions? Let's just say that when the good doctor's findings make their way to the press, it is absolutely done without the expressed written consent of the National Football League, which apparently studied Big Tobacco when it came to stonewalling science and denying responsibility.

From there, the film (directed by Peter Landesman, whose often riveting historical drama Parkland examined the frenzied aftermath of the JFK assassination) documents the struggle of the strong-willed doctor to bring his results to light against the NFL's steadfast efforts to bury them. There is little doubt that when this film opens on Dec. 25, the NFL, which never met a public relations challenge it couldn't bungle, will be vilified once again.

For all the talk of Smith's strong performance, one wonders if the subject matter couldn't have been tackled with less sentimentality and heartfelt biography.

Albert Brooks is his usual charismatic (and bald-cap-rocking) self as Dr. Omalu's mentor. He warns his protégé of the league's power and special place in America's heart: "The NFL owns a day of the week. The same day the Church used to own." But a sidebar love story involving a fellow earnest African émigré (played by Gugu Mbatha-Raw) is just a fluffy distraction. They tell each other that to be Americans they need to be the "best versions of themselves." Their religious drivel is just bothersome.

In a crisp accent that means that everything that comes out of his mouth must be true, Smith's Dr. Omalu's says that, while in Africa, he believed that Americans were the "manifestation of what God wants us to be." Little did he know that Americans worship different things than he does. On any given Sunday, football players are sacrificed and a desperate against-the-odds play is called a "Hail Mary." Hut-hut, amen, you bet. 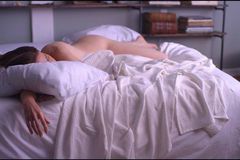