It's almost an hour into the sci-fi horror movie Dark Skies before anybody says the word "aliens." The characters are reluctant to believe in the face of overwhelming evidence, mostly because writer-director Scott Stewart doesn't want to play his hand too early. By the time the movie is over, it's easy to see why he kept his cards close to his chest. He's not really holding anything.

And the bluff doesn't really work. At no point in Dark Skies is there any doubt that the events affecting the suburban Barett clan – dad Daniel (Josh Hamilton), mom Lacy (Keri Russell) and sons Jesse and Sam (Dakota Goyo and Kadan Rockett) – emanate from somewhere in deep space. Stewart even throws in a pre-credits epigraph from 2001 scribe Arthur C. Clarke about the likelihood that we are not alone in the universe, both for highbrow cred and to ensure that the case for interstellar interlopers is a slam dunk. Foreshadowing isn't new – but this particular gambit makes the audience feel like they're light years ahead of the people onscreen.

As a result, the prevailing feeling in Dark Skies is not terror, but impatience. Both Daniel and Lacy seem to be smart, plugged-in professionals (though he's recently out of a job) and so it's a bit of a head-scratcher when they respond to the bloody kamikaze assault of a flock of birds on their home with little more than a shrug. Later, Lacy wakes up from a nightmare and discovers a nasty gash on her head in the same place she dreamed she'd been injured, yet she chooses to soldier on for a night of much-needed nookie with her stressed-out spouse.

There's a kernel of an interesting idea here, which is that the myriad distractions and anxieties of modern life have insulated us against more primal fears. Stewart doesn't do nearly enough to tease this out, however. Instead, he lazily goldbricks his way through a series of palpably false scares and cribs scenes and plot beats from similar movies, including Paranormal Activity (when Daniel erects a network of security cameras to see who's been moving things around at night) and Signs (evoked and/or ripped off in a sequence where a family dinner takes on the melancholy air of a Last Supper).

The only scene that truly stands on its own is an interlude featuring the great character actor J.K. Simmons as a self-styled extraterrestrial expert whose resignation in the face of such formidable adversaries is comic and creepy. Years of close encounters have taken the fight out of him, but he advises the Barretts to stand up and defend their turf against the sinister forces that would seek to divide and conquer them, at which point Dark Skies starts to feel very much like it's allegorizing – and possibly outright endorsing – a certain strain of all-American paranoia.

After spending most of the movie hedging, hemming and hawing, Daniel finally makes a trip to the gun store to get locked and loaded. The fact that the finale takes place amidst stirring Fourth of July fireworks and a soundtrack rendition of America the Beautiful surely isn't a coincidence. But even if Dark Skies is an uncommonly reactionary genre flick at its core, it's so utterly superficial as a thriller that it's hard to imagine anybody getting the message.

Film Review
The hallucinatory fever dream of Beyond the Black Rainbow
April 30, 2018 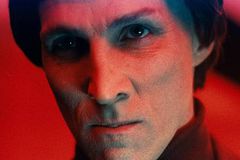 Film Review
Grave Encounters 2: Nail in the coffin of the 'found-footage' horror genre?
May 11, 2018 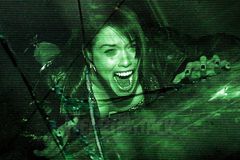 Paranormal Activity 3 delivers - eventually
May 11, 2018
Follow us on Twitter @globearts Opens in a new window
Report an error Editorial code of conduct
Due to technical reasons, we have temporarily removed commenting from our articles. We hope to have this fixed soon. Thank you for your patience. If you are looking to give feedback on our new site, please send it along to feedback@globeandmail.com. If you want to write a letter to the editor, please forward to letters@globeandmail.com.
Comments