As appropriate to a movie as self-referential as Iron Man 3, the real question for audiences isn't whether Tony Stark/Iron Man defeats the latest supervillain (of course he does), but whether the movie itself rises above the dreaded third-in-a-sequel torpor of Spider-Man and The Dark Knight. Spoiler alert: Yes, mostly, it does.

Stronger than 2010's anemic Iron Man 2, though not as bold and shiny as the first film in the Marvel Comics-derived series, Iron Man 3 adds a slightly fresh twist to the usual package of wisecracks and spectacle that led the first two films, under Jon Favreau's direction, to a $1.2-billion worldwide box office.

This time, Favreau has been replaced by director and co-writer Shane Black, who brings his own baggage and bag of tricks. Black, who first came to fame as the writer of one of the first smartly deranged action films, 1987's Lethal Weapon, went from hot to not in the early nineties (the low point was The Last Boy Scout). In the past decade, he also directed Robert Downey Jr. in one of their mutual comeback movies, 2005's smart crime film, Kiss Kiss, Bang Bang.

Black, who knows that Downey is Iron Man's best asset, gets the actor out of the mask for much of the film. Even more than before, the series feels as though it should probably be retitled Irony Man in Downey's honour. With his neurotic glib patter, lounge-lizard goatee and moments of pop-eyed exasperation, he adds an indispensable personal eccentricity to spice up the mundane business of saving the planet.

The film begins with a prelude, set on New Year's Eve in the innocent days of 1999, and introduces us to a couple of characters from Tony's past who are ready to pop up again: a botanist called Maya (Rebecca Hall), who is reconfiguring plant DNA with unfortunate explosive results and whom Tony beds in Switzerland at the end of a conference.

On that same night, he meets a needy, nerdy scientist (bespectacled, buck-toothed and lame) named Aldrich Killian (Guy Pearce), whom he mockingly dismisses. Little does Tony know that Killian is looking to finance his new start-up, Extremis, which can "hack into the hard drive of any living organism" and change its DNA. When those organisms are human beings, this means that they glow orange like jack-o'-lanterns and shoot lasers from their fingers.

Jump to the present, when Tony is suffering from anxiety insomnia in the aftermath of last year's The Avengers, in which superheroes and gods had a set-to. Though still equipped with his armour of wit, as well as a series of experimental metal exoskeletons, Tony works late in the night in his Malibu lab. Busy developing a team of Iron Man robots, Tony pays even less attention than usual to his girlfriend, Pepper Potts (Gwyneth Paltrow), in the same flirty, if heatless, relationship.

Soon, Iron Man's government calls on him again for help. A new bad guy is on the loose, an Osama bin Laden-like America-hater named The Mandarin (the original comic book character was Chinese) who hijacks the airwaves to boast about his past and upcoming attacks. The Mandarin speaks in a broad American accent, punching the r's in an exaggerated fashion that at first sounds like bad acting, but turns out to be a clue to his secret identity.

When The Mandarin's henchmen blow up part of Hollywood's Chinese Theatre, he leaves Stark's security chief (Jon Favreau) near dead, leading Iron Man to personally challenge the villain to a mano-a-mano battle. Though Black avoids the self-important seriousness of the Spider-Man/Dark Knight franchises, he mixes his jokes with some old-fashioned sentimentality. After The Mandarin chases Tony out of his Malibu digs, the stranded superhero finds himself, just before Christmas, hiding out in rural Tennessee, where he bonds with a misfit fatherless kid (Ty Simpkins). This is straight out of Black's Last Action Hero.

Other elements of the script feel barely sketched in. The villains' motives remain murky. There's little effort to make the technology sound plausible, while the glowing-fingered soldiers feel left over from a no-budget sixties sci-fi movie. Mostly, though, Black papers over plot holes with constant self-referential quips and a few set-piece stunts, including a discomfiting sequence in which passengers free-fall from Air Force One.

Otherwise, IM3 feels as though it has been put through a script echo machine. Every major character seems to be equipped with a double identity at some point, and Tony tends to keep a kind of play-by-play commentary on his own performance ("It's moments like these when I realize what a superhero I really am").

Numerous characters get a chance to don his Iron Man suit – from Pepper Potts, to Colonel James Rhodes (Don Cheadle), to the kidnapped President. There's even an army of robotic Iron Men on standby, underscoring the assembly-line nature of these kinds of sequels.

Of course, clever is better than its opposite, and Black's stamp along with Downey's rakish louche style are fun for a while – but there is little room for emotional engagement, or the illusion that any of the characters are in jeopardy, no matter how many objects are exploding. After a while, the steady diet of tongue-in-cheek starts to taste monotonous as day-old gum. 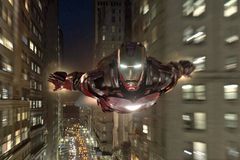 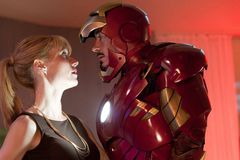 Downey's performance is Iron Man's secret weapon
April 27, 2018
Downey supplies the bang
April 22, 2018
Follow Liam Lacey on Twitter @liamlacey
Report an error Editorial code of conduct
Due to technical reasons, we have temporarily removed commenting from our articles. We hope to have this fixed soon. Thank you for your patience. If you are looking to give feedback on our new site, please send it along to feedback@globeandmail.com. If you want to write a letter to the editor, please forward to letters@globeandmail.com.
Comments