Norman, a spiky-haired boy of 11, has good reason to converse with the dead – they're so much nicer and more available than the living. By night, he chats up his beloved old granny, long deceased but still a companionable sort. By day, walking to school along the streets of Blithe Hollow, he greets the friendly ghosts of the dear departed, who greet him affably in turn. Yet inevitably, upon reaching his destination, Norman is the "freak" bullied and ostracized and otherwise degraded by the alive-and-well crowd. Such is the outcast fate of most heroes in the best children's tales. And ParaNorman, a ghoulishly delightful exercise in stop-motion animation, is a very good children's tale indeed.

But, beware, it's not for the faint of heart: Kids should exercise extreme caution in only choosing adults mature enough to accompany them. That's because the co-directors here are Brits with a wry sense of humour, a Grimm faith in the need of the young to confront the darker corners of their imagination, and a politically incorrect fondness for unpalatable truths.

When Norman finds a buddy in the chubby and similarly persecuted Neil, his new friend extends him no sympathy but does offer a little advice: "You can't stop bullying – it's part of human nature."

In fact, the perils of human nature have a rich history in this New England town. Three centuries back, witches were burned at the stake for the sin of non-conformity, and their curse on the place is rumoured to linger. You can see where this is heading. However, before it gets there, our boy hero must contend with the corpse of his eccentric uncle, freshly felled by a heart attack and clutching a tome that may reveal the secret of the witches' curse. Okay, kids, this is the bit that will test your parents' mettle: Darned if Norman isn't obliged to ply the book from the man's cold, dead and extremely inelastic hands After that scene, the zombies are a walk in the graveyard.

Yes, a septet of zombies, remnants of the intolerant Puritans who were the bullies of their time. The seven may look gruesome but, in a nifty reversal, they're the 'fraidy cats now, terrified of cellphone modernity and, even more, of their contemporary counterparts – the big-assed mob (the Brits love to sculpt the Yanks jumbo-sized) gathered at the town hall, with blood on their mind.

Naturally, being well-acquainted with the dead, Norman (the voice of Kodi Smit-McPhee) seizes the chance to shine. His small posse includes Neil (Tucker Albrizzi) and their respective older siblings – sister Courtney (Anna Kendrick) with her shallow desires and raging hormones; brother Mitch (Casey Affleck) with those bulging muscles hiding his own secret. En route, the directors, working at the same studio that made Coraline, prove themselves superb technicians in the stop-motion medium – the camera angles are as complex as live action; the 3-D add-on is organic and understated; and, when the action gets heated, the special effects live up to their name. If the story lacks the consistent psychological depth of Coraline, another tale of an outcast finding solace in a parallel world, amends are made during the lovely climax.

That's where Norman meets his 18th-century equivalent in Aggie who, at an equally tender age, was subjected to a rather more extreme form of bullying – branded a witch, set ablaze by people whose fearful nature led them to "punish imagination and difference." Wrapped in a shroud of red light, Aggie's innocence is palpable and so is her anger. "They hurt me," she wails, her perplexed surprise as raw now as then. Norman nods in understanding, yet his reply doubles as an interrogation, and the question mark echoes across all the witch hunts through all the generations: "So you hurt them back?"

In those five childlike and questioning monosyllables, there's so much going on. Vengeance is vying with wisdom, the Old Testament is bumping up against the New, normal and para are struggling to fuse – but, of course, no answer comes. Perhaps, if we adults ever grow up, it will.

In ParaNorman, the magic of making a nine-inch puppet come to life
August 20, 2012 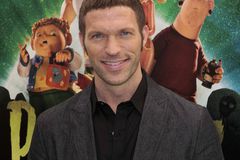