Welcome to Jake Kasdan's jungle, he's got fun and games. Unfortunately, he doesn't have much of a movie. Kasdan is the director and co-writer of Jumanji: Welcome to the Jungle, a long-unanticipated standalone sequel to a romping 1995 fantasy adventure starring Robin Williams. In the original Jumanji, young characters are caught inside a board game come to life; in the new sequel, it's a video game they adventure within – a rigid construct of one-note humour, special-effect shenanigans, relentless quest-based action and sledge-hammered messaging.

Jumanji attempts (and somewhat succeeds) to harness the spirit of video-game amusement and maybe even gets to the heart of computer-toy fantasy, but mostly it settles for entertainment and passing the time – Xbox amusement for the popcorn-loving youngsters, a very-poor-kid's Raiders of the Lost Ark.

The box-office big man plays (sort of) against type, which is something he can handle very well indeed. He's one of four – five, when Nick Jonas joins in – characters tasked with restoring a jewel to a giant jaguar statue. A villain (played by Bobby Cannavale, in a role even more cartoonish than his crazed record-label owner in HBO's Vinyl), his motorcycle-riding henchman and all manner of fearsome jungle mammals stand in the way.

At the film's beginning, we meet our four high-school archetypes: A self-obsessed, selfie-taking hottie; a hulking football jock; a frightened, nerdy video-game enthusiast, and a prematurely jaded anti-social bookworm named Martha. For various transgressions, they all get sentenced to detention in an old AV room filled with outdated things. Instead of plugging in a VHS tape of, say, The Breakfast Club, the four decide to play a role-playing video game. Before you can say "Tron," they're sucked into the circuit boards and away we go.

Here's where the film takes shape. When the four teens are plopped into the jungle, they slowly realize they are all in the form of the avatars they had selected at the beginning of the game. The comely blonde? She's now a pudgy professor (Jack Black), specializing in cartography and paleontology. And so we have Black playing a teenage girl tapped inside a middle-aged man's unappetizing body. Plenty of laughs here – penis jokes, naturally.

Mousy Martha, on the other hand, emerges as Ruby Roundhouse (Karen Gillan), a dance-fighting commando who kicks buttock to the tune of reggae Peter Frampton music (twice). An enormous football player (nicknamed "Fridge") is now a diminutive zoologist, played by Kevin Hart, who is the same insufferable yap-happy character he unfortunately almost always plays. And our nervous gamer lands in Jumanji land as the buff hero and archeologist Dr. Smolder Bravestone, played with nuance by Johnson, who can smoulder with the best of them.

Do you see what has happened here? The unsure and insecure teenagers now inhabit the adult characters of the type of they wish to be – maybe not pure alter egos, but the traits of their jungle counterparts could at least be added to their own inner selves.

The messages of the film are simple. A generation has grown up playing video games in which characters have multiple start-agains before it is game over. "You have one life," the school principal tells the detained foursome. "You decide how you're going to spend it."

Each of the characters has their own strengths and weaknesses, but if they "trust each other and never blink," the team will succeed. And when a clear path is laid out for the crew, Rock's character surmises a life metaphor: "It's what the game wants us to do. It's a trap!"

Here's another trap: Setting a film within a video game, which by their nature are straightforward adventures with clearly stated goals. Kind of boring, unless it's your hand on the controller. Watching other people play Jumanji, then, just doesn't cut it. 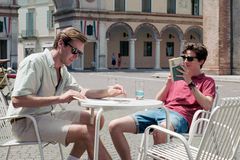 Film Review
Review: Ferdinand won’t be the next big hit, but there’s a reason the story endures
December 15, 2017 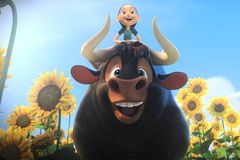 Film Review
Review: The Last Jedi is weighed down by too many new additions
December 12, 2017 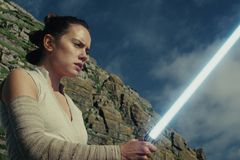