Athina Rachel Tsangari is familiar with competition – on a grand scale: She designed the projections and directed the video portions of the 2004 Athens Olympic Games opening and closing ceremonies.

The theme, in a quite different manifestation, emerges in her new movie, Chevalier, a deadpan comedy of manners about the not-entirely-friendly rivalry among men.

The competitors vie for "best ever" status in a game they make up as they go along. Accomplishments range from recipe knowledge and morning erections to pebble-skipping, cholesterol, even ringtones. All are as subjective in judgment as their assigned scores are arbitrary.

The tagline for this, her third feature, is "a buddy movie without buddies," but it's tongue-in-cheek and not entirely true. While still working on the screenplay with Efthymis Filippou (co-writer of The Lobster, Dogtooth and Alps), writer-director Tsangari auditioned taxi drivers, real chefs and ship captains, not just actors, "because I really wanted to see what was going to happen in rehearsal, and how they were going to conquer and claim their characters," she says.

As the cast rehearsed their roles, "there were definitely alliances that happened immediately."

"In the end, I cast it for the personalities and their egos," Tsangari says of the "immensely collaborative" project. "So, you know, every time I hear or read people say, she's making fun of men, looking down on men," as if the observations of behaviour between her alphas and betas were heavy-handed and imposed, "it's not that. But also, yes," she says. "But it was them having incredible fun, too much sometimes – like a zoo between takes!"

In Attenberg (in 2011, Greece's official Academy Awards foreign-language film entry), the director offered a misfit outsider's observation of humans but Chevalier – as empathetic as it is acerbic – actually arose as a sort of continuation of her 2012 short The Capsule, she says. That film's sci-fi bent let her explore power dynamics among women confined to an island. "I thought it would be interesting to research that paradigm of same gender, with an all-male cast." Six very different men are on vacation together, their "island" a luxury yacht bobbing along the coast on a glinting Aegean Sea, although they are far less interested in diving and fishing than in one another, and they are constantly making notes in their little black books. Each wants to be deemed "the best in general" – an achievement in a game of life they've devised that is at once all-encompassing and absurdly vague.

If the Bechdel Test were one of the contests, Chevalier would fail spectacularly but that is also very much intentional. "A buddy movie is essentially just men," she explains. "And then you just have a few women who pop in and out but they are completely peripheral and decorative. So I liked the idea that women were there" – either on the phone or in the music soundtrack via Petula Clarke and Minnie Riperton – "but like phantasms, like reminders of the outside, real world."

The restricted location feels as if they'd boarded the train from Chicago to New York in Hawks's screwball-defining Twentieth Century, minus the histrionics, though definitely not without melodrama.

Tsangari's been thinking of doing a screwball comedy in Greek but it's a challenge, she says. "It's a language that doesn't lend itself to screwball," not because of how layered and complex the language is but because it isn't as machine-gun fast as English. She has been working on an English one, though, during her time as filmmaker in residence at Film Society of Lincoln Center last year and subsequent tenure as a Radcliffe-Harvard Film Study Center fellow over the winter.

Her first feature was a riff on several genres, and her film dialogue is also sometimes composed based on cadence – Chevalier's big scene where the men decide the game "was built on melody between those voices – almost like a musical. Without music."

As it happens, one of Tsangari's all-time favourite films is Singing in the Rain. "Which, again, talking about a film that's extremely distantiating, it's basically like an avant-garde film, and at the same time extremely human." As is Vincente Minnelli's The Band Wagon. "Some managed to do that – Buñuel, Minnelli, Altman … Avant-garde at the same time as you pour your heart in it." As her movies move ever more toward naturalism, "I'm curious about the dosage of formalism and humanism."

Even the perfunctory background notes about production supplied to press reflect this playful yet serious conceit, in that they aren't notes – they, too, consist of random challenges. "Because it's a game that everyone plays," Tsangari says, pointing out how we're playing it now within the shifting power dynamics of the film festival interview. Our conversation, hosted in her Canadian film distributor's office, has the director seated behind the boss's desk and this journalist in a chair across it. Who's interviewing whom? As in the film, the steward, chef and ship captain are observing the competition while also being drawn into it themselves. "We're checking out each other's glasses and we're evaluating, like, each other's shirts," Tsangari says. "Yours is an upside-down?" she squints at the loose illustration on my T-shirt and asks what it is. It's a trio of ostriches wearing tube socks and heels. "That's like, plus 20 points." 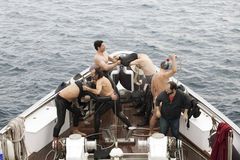 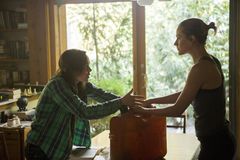 The Waiting Room is nuanced and layered while dealing with heavy material
June 3, 2016 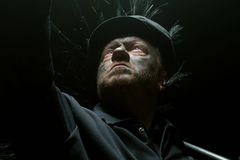 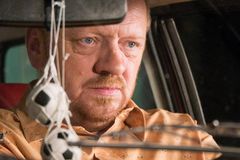 Ellen Page makes her producing debut in postapocalyptic film Into the Forest
June 2, 2016

Daniel Cross’s doc I Am the Blues follows musicians in the Deep South
June 2, 2016 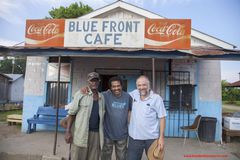