With 11 Oscar nominations for a movie based on his best-selling book, one Golden Globe win, nine million books in print and a new movie tie-in edition selling briskly, Life of Pi author Yann Martel is happy to step out of the limelight.

"I know my place," Martel said Monday, speaking from his home in Saskatoon. "People keep saying, 'I saw your movie,' and I have to say, 'It's not my movie.' I'm very clear in my mind it's someone else's movie – his vision, his work."

Director Ang Lee's adaptation of one of the most successful Canadian novels ever published "was done with minimal involvement on my part," according to Martel.

"But as the English say, it chuffs me that it's done so well," he added, "and I'm delighted with all the Oscar nominations."

Martel says that he never considered trying to adapt the novel himself, "in part because I would feel somewhat out of my depth." He consulted twice on drafts of the script with director Lee and screenwriter David Magee (both nominated for Oscars for their work on the film), suggesting only minor changes.

"Beyond that, I was quite happy to let them go ahead," Martel said, "because I respect the integrity of other artists. David Magee is a screenwriter and Ang Lee is a great director and they know what they want to do. My feedback was at the level of detail."

Staying clear of the film could have been a clever decision: In an interview with The Atlantic, Magee said that before tackling the project he considered Life of Pi unfilmable – and he produced 170 drafts before arriving at the final script.

Lee did invite Martel to visit the set during the last two days of filming in Montreal, according to the author, and both he and his parents were rewarded with cameo appearances in the film. Martel can be seen sitting on a park bench in the background of a scene featuring actors Irrfan Khan as the adult Pi and Rafe Spall as the Martel-like character known only as the Author.

Although Martel is expecting an invitation to attend the Academy Awards next month in February, he stayed to home in frigid Saskatoon during the Golden Globes, where Toronto composer Mychael Danna won an award for scoring Life of Pi. Remaining undistracted by his second novel's extraordinary success has become one of his special skills.

More than a decade after its publication, Life of Pi remains the No. 1 selling Canadian novel on Amazon, its No. 4 selling "literary" novel and No. 26 among all books. Subway placards advertising the tie-in edition boast that nine million copies of Life of Pi have been sold to date.

"It's such a big number it becomes meaningless," Martel said, adding that the fate of the book has become "very external" to his life today.

"It's quiet out here," he said. "It's cold. It's sunny. I'm not crowded by nine million books staring at me."

Unlike Lee, who is busy promoting his film, Martel has moved past Pi. "There's nine million books circulating out there but they're not connected to me by any nerves," he said. "So it's not something I think about a lot."

Nor does he regret the relative failure of his follow-up novel, Beatrice and Virgil, which is currently struggling at No. 70,951 in Amazon's ranking of all books.

"Once I'm in my little studio and I've closed the door there's nothing here but my current novel," he said. "I'm neither aware of the success of Life of Pi or the sometimes very negative reviews Beatrice and Virgil got. That's all on the outside."

Letting go "is very easy to do once you're caught up in a new project," he added.

Tentatively titled The High Mountains of Portugal, his new novel "is going incredibly well," according to Martel. Like both his two previous novels, this one will include animal characters. "This time it will be chimpanzees and rhinoceroses, but in a very different way from Life of Pi and Beatrice and Virgil," he said. "Once again I use them because they're very powerful metaphors."

Although he has kept his distance, Martel has firm views about which nominees he thinks should prevail at next month's Oscars. "We need to take risks in art and they took a risk," he said, including the Fox movie studio in his praise. "This is not an obvious story to film, and they backed it the whole time, they backed it fervently. I'm grateful to them for that and I hope they're rewarded for it." 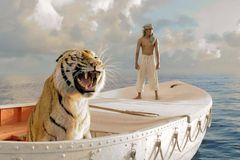