There's something apt about the fact that mescaline didn't work on Michael Cera. In projects such as Juno, Scott Pilgrim vs. the World and Arrested Development, the Brampton, Ont., native has made a career out of playing the wan, pencil-necked kid who can't quite pull off the cool experience. The reed-voiced geek who manifests on the outside the haplessness we all feel on the inside. The sweet but luckless fellow who, at best, hopes his awkwardness comes off as endearing.

Yet when Cera found himself ingesting a hallucinogen on a Chilean beach, it seemed that the ingredients were finally in place to break that pattern – that he was headed for a moment that was, if not epiphanic, at least memorably wild.

It had sprung from his own initiative: After seeing Sebastian Silva's critically lauded 2009 film The Maid, Cera had asked Silva for a meeting. Over coffee at the Standard Hotel on L.A.'s Sunset Strip, they hit it off and forged a friendship. "Sebastian's films explore characters, and not a lot of films do that," Cera, 25, said last week by phone from New York. "He's an inspiring person to be around."

So a few years later, when Silva asked Cera to be in his film Magic Magic, Cera flew to Chile and hung out for three months, learning to speak Spanish and waiting for financing to come through. It didn't, so Cera went home. Months later, he was back: Silva had secured financing for a lower-budget film, Crystal Fairy, and wanted Cera to play the lead. (It opened yesterday in select Canadian cities.)

There wasn't a script exactly; there was a 10-page outline that laid out each scene and its arc within a skeletal plot. Jamie (Cera), a high-strung tourist, convinces three Chileans to drive him to the Atacama Desert, find a San Pedro cactus, boil it into mescaline, and trip on the beach. En route, Jamie meets Crystal Fairy, a ragged flower child, and invites her along – which he immediately regrets when her earth-mothering conflicts with his control-freakishness. Eventually the drug is drunk and true characters are revealed.

Silva's three brothers – scruffily sexy soccer types – play the friends, and as Crystal Fairy, Silva cast Gaby Hoffmann, an actress with fascinating artistic cred: The daughter of Viva, one of Andy Warhol's Factory stars, Hoffmann was raised in New York's famously seedy Chelsea Hotel, an alt-Eloise. As a tot, she supported her family by playing precocious children in Field of Dreams, Sleepless in Seattle and Now and Then. After graduating from Bard, arguably the artiest college in the U.S., Hoffmann traded showbiz for drifting, studying to be a chef, then a doula. Recently she returned to acting, with roles in Todd Solondz's Life During Wartime and on Louis CK's show.

In Chile, every morning of the spare, 12-day shoot, "we'd show up on set and have to figure out the crux of the scene, what it was we were discussing and disagreeing about," Cera says. "We had to express what the heart of the conversation was without scripted lines, which was nice, because it makes you listen to people. You can't just memorize your lines. You have to know what your intention is, and listen to what is said."

Over the phone, Cera's high, thin voice sounds like it's still settling on its post-puberty register, and he speaks with a bland affect that's reminiscent of many of his roles. But this is a far different character than others he's played. As Jamie, he had to be openly cutting to Crystal, mocking her grooming (he calls her Crystal Hairy) and her unveiled yearning for connection. "I was surprised as we went how rude I could be, right to her face, and still feel like a real character," Cera says.

Funnily enough, his pals Seth Rogen and Evan Goldberg had also recently cast Cera as a jerk version of himself in their apocalypse comedy This is the End, where he steals the opening scenes by snorting, sexing and swearing it up in narcissistic splendour. Funnier still, he does it all while wearing his own windbreaker, which looks like a sale item from the boys department. (His family members, who still live in Brampton, found his character hilarious. His mother took his grandfather, and he loved it, too. "He likes going to see stuff that I'm in," Cera says. "He has a lot of friends who ask him questions about that stuff.")

But Cera insists the nastiness of his recent roles is a coincidence, not a new career direction. He didn't write his character in This Is the End; he just thought it would be a great way to hang with friends for two days. And he finds Jamie more sad than anything else. "He's a real kind of person who I've seen," Cera says, "who's totally on his own in the world, unable to connect with other people, let people help him. It's so lonely. He's acting out on his frustration and solitude. I think anyone can relate to that, even if they're not afflicted by it themselves. He's a version of a lot of people."

Nearing the end of filming, all of Cera's hopes for Crystal Fairy were coming true: Shot close, with long, intimate takes, it's an uncompromising yet empathetic character study, with a 1970s, European-art-house vibe. Cera's performance is fearless and fully grown-up – especially so since his character is the opposite. The 12-person cast and crew worked long days, then went out to dinner together, where they'd "laugh and dance and play stupid games, play guitar," Cera says. "It was great, like a vacation, really."

When they reached the beach where the mescaline-trip scenes were to be shot, they collectively decided the actors should sample the drug, and be high on camera. "We thought, 'We're all out here, let's see what happens,'" Cera remembers. "It just felt like something different. Maybe something interesting would come out of it."

They boiled the cactus. They drank. They waited. "There was a buildup, anticipation and nerves," Cera says. Then … nothing. "I really didn't feel anything," he continues. "It was surprisingly insignificant. I think it didn't work." Maybe they didn't drink enough, or it wasn't a potent batch. Maybe, Cera says, he was "looking too hard for it."

It didn't matter. They finished the film, which was a "really fulfilling experience" for Cera, who'll always remember "being on that beach, how happy I was." A while later, the financing came through for Magic Magic, and Cera and Silva shot that, too (it's due out later this year). Meanwhile, Cera had a "fantastic, surreal" time shooting a new season of Arrested Development for Netflix. He's not sure if they'll make more, but he's game.

The truth is, he doesn't need drugs or epiphanies; simply being Michael Cera feels pretty great these days. "I'm spoiled," he admits. "I don't work on something unless I feel drawn to it. That's a luxury I have. I don't have to make money right now. I only work when something makes sense to me, which is a thing I really appreciate. I hope I can keep doing that for a little while longer." He may not be conventionally cool, but in his own quiet way, he's redefining it. 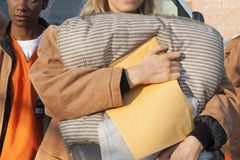 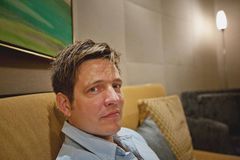 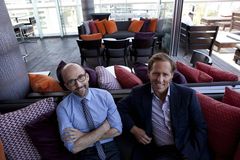