There are two things you should know about Lisa Modlich. One is that she is an 87-year-old Texan. The other is that she will destroy you at Ping-Pong.

This isn't some sweet little old lady seeking out a friendly game of table tennis to pass the time – she wants to win. Moldich, a world champion table-tennis player, is one of eight members of the over-80 set competing for world supremacy featured in the new documentary Ping Pong.

Modlich recently attended the film's U.S. premiere, wearing, of course, a gold dress. "Everybody in the audience asked me questions. They asked me how come I have a gold dress on. I said, 'Because I like gold,' " she says.

Although she had to miss defending her title at the World Veterans Championships in Sweden this year because she was recovering from cataract surgery, Modlich took the top prize at the previous tournament, the one at the centre of the documentary, which took place in China in 2010.

Her secret to success? "I attack. When the ball comes to my right, I hit 'em as hard as I can," she says.

The same can't be said for Dorothy de Low, who was 100 when she competed in China. She could return balls hit at her, but any shot that required her to move her feet she just let go by with a pleasant, such-is-life shrug. There's something sweetly comical in these scenes, but also something pleasantly uplifting. As one person in the documentary says, never mind being able to play table tennis, they'll just be happy if they can make it to 100.

De Low got the movie started in her own small way, English director Hugh Hartford says. He saw her picture in an in-flight magazine and inspiration struck.

"The whole film was driven by the people and the characters," he says. "We played table tennis when we were younger, but no more than any one else." The sport was simply a place to begin to explore the lives of players. "It was a route into what the film is really about, which is growing old and coming to terms with mortality," Hartford says.

Each one of the eight players in the movie is unique, but Hartford knew he had struck gold when he encountered Modlich. "She doesn't hold back," he says.

The film portrays her as a cutthroat competitor who is sometimes disdainful of the people across the table. But she doesn't object to how she comes off in the movie. That's how she is, she says before launching into a story about an encounter with a German woman at the tournament. Modlich invited her to play for a while to warm up. "She looked straight at me and said, 'I don't want to play with you. I don't want you to see my style,' " Modlich recalls, barely restraining a snort. "When I beat her 11-2, 11-3 and 11-4, I smiled at her and said, 'Well, how do you like my style?' "

And then she laughs, the way only people who relish victory this much can laugh. She likes to win. "Doesn't everybody?"

Film Review
Ping Pong: A smashing good time for one and all
November 23, 2012 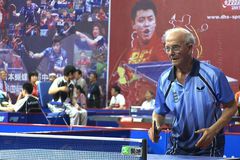