There are a lot of words that come to mind when watching Luca Guadagnino’s remake of Suspiria: beautiful, gross, overwhelming, frustrating, disturbing, powerful, long, gross, audacious, baffling, explicit, extravagant and did I mention gross?

One other word that popped up in my mind and refused to go down, though, was “Vergangenheitsbewältigung.” Not actually, as there’s zero chance that I could pronounce that word or even attempt to spell it, if forced. But the German term, translated roughly to “working through the past” and more specifically used to describe any post-1945 attempt to dissect and learn to live with the ramifications of the Holocaust, echoes constantly throughout this new, complicated Suspiria.

Why else would Guadagnino and screenwriter David Kajganich – who previously collaborated on 2015′s A Bigger Splash, another extremely loose remake – concentrate their work not on the hallmarks of Dario Argento’s original giallo but on a wholly new character, that of Dr. Josef Klemperer? The bones of Argento’s iconic horror are respected here – there’s still a young, wide-eyed American dancer named Susie (Dakota Johnson), there’s still a coven of witches operating a Berlin dance academy led by the enigmatic Madame Blanc (Tilda Swinton) and there are still untold gallons of blood spilled after these two forces collide – but the Suspiria 2.0 filmmakers are far more interested in Klemperer, their own unique creation, who is employed to explore guilt, shame and historical tragedy.

The character is introduced in the new film’s first few minutes as the protector of Patricia (Chloe Grace Moretz), a young dancer who flees the Markos Dance Academy in West Berlin, circa 1977. Patricia’s rants about a coven that controls Markos and the evil of “the Three Mothers” – a witch mythology Argento tweaked from the writings of Thomas de Quincey – are written off by Klemperer as the thoughts of an unsound mind. But soon enough, the doctor is convinced that Patricia is telling the truth and that an ancient evil lurks behind, below and inside the walls of Markos. It all has the air of terrible familiarity for the doctor, as Guadagnino and Kajganich are careful to underline throughout the film. As someone who lived during, and lost profoundly in, the Second World War; as someone who makes regular pilgrimages to a secluded, mysterious cabin in East Berlin; and as someone who both wants to forget and remain in the past, Klemperer is positioned as Germany’s living, corrupted conscience.

Guadagnino and Kajganich aren’t exactly being coy here. “Klemperer” literally means “tinker,” as in someone who fixes the home, or perhaps in this case the homeland (it could also be read as a reference to German scholar Victor Klemperer, whose diaries of life under the Third Reich have become standard text for historians). Madame Blanc’s ultimate dance is called “Volk,” a highly loaded and nationalistic word for “people.” The entire damn film is set during the German Autumn of ’77, when the Red Army Faction held up a cracked mirror to the country’s projected image of a Nazi-purged nation.

There is so much heavy and historical baggage to unpack with Klemperer that it seems Guadagnino and Kajganich invent distractions for comfort or sheer thematic competition. There’s the easy metaphor, for instance, of a divided Berlin acting as a stand-in for the dichotomy of good and evil. There are the internal power dynamics of Markos itself, which present a centuries-old coven as just another United Nations, with a slightly more impenetrable bureaucracy. There’s all manner of sexual and gender politics teased and then left dangling. And then there’s the fascinating context of motherhood and rebirth that beguiled Argento just as much as it’s entranced Guadagnino and Kajganich – if only the latter pair would stand still for any one of the film’s 162 minutes.

Still, the filmmakers' insatiable curiosity and grandiose sense of spectacle keeps Suspiria from becoming half as annoying as it should be. There’s no real reason the new film needs to be divided into six chapters (plus an epilogue!), but the vanity of such a structure works regardless. Guadagnino’s Berlin lacks the bright visual pop of Argento’s, yet his stubbornly dour aesthetic at least sticks closely to his Very Dark Indeed themes.

Less successful is Guadagnino’s ridiculous stunt-casting of Klemperer. For months, the director insisted that an unknown German actor named Lutz Ebersdorf landed the role, until he admitted it was actually Swinton under heavy prosthetic makeup (the ruse even duped, or found willing accomplices in, The New Yorker’s fact-checkers). It makes a certain bit of backward sense that, in a film filled with women but directed and written by men, the only male character would be a gender-swapped joke. But it feels, again, like the filmmakers having too much to say and not enough sense to think anything through.

Back in April, Amazon Studios debuted the first footage for Suspiria during a Las Vegas luncheon for exhibitors and media. As attendees were polishing off their chicken and salad, the banquet hall witnessed the film’s second-most gruesome scene, in which Susie’s big dance for Madame Blanc is juxtaposed against another young woman’s body being contorted in the most ungodly fashion, until she’s nothing but a knot of misplaced bones. More than a few people fled the room, their lunch threatening to shimmy back up their throats.

Placed within the context of Guadagnino’s complete vision, though, the set-piece is almost anodyne. Suspiria is a far more stomach-churning affair when it threatens to say one thing, but ends up spilling all its guts at once. 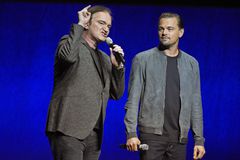 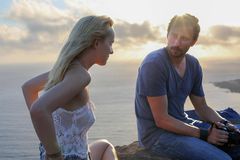