Shortly after the September 11, 2001 attacks, it was decided – by the likes of Vanity Fair’s Graydon Carter, Time’s Roger Rosenblatt and the National Post’s Andrew Coyne, the latter of whom appears to be have been the first one to articulate the argument – that the "age of irony” was dead. It took only a year or two to understand that those last rites were premature – just as we’re now entering the realization that the great art we were promised in this Donald Trump world has not come to pass.

Creators as disparate in their politics and sensibilities (and, um, talents) as Steven Spielberg, Michael Moore, Roseanne Barr, Sacha Baron Cohen, Salman Rusdhie, Jim Carrey, Kanye West and the writers' room of Saturday Night Live have attempted to deliver work that could only mean something (even everything) in the Trump era. If any of the above have indeed created that definitive post-Trump masterpiece, kindly let the rest of society know, because it is hard to imagine a future 40 years from now where Fahrenheit 11/9 or Who Is America? or Ben Stiller playing Michael Cohen are remembered fondly, or at all (assuming we make it another 40 years, of course).

To this list of would-be definitive Trump-era content, add Ike Barinholtz’s directorial debut, The Oath. Unlike some of the more opportunistic or deluded artists mentioned above, Barinholtz’s work is nothing if not well intentioned – a comedy with something to say, even if it prefers spitting its words to delivering them with depth or conviction.

Opening with a dark joke that is just-this-side-of-plausible – a Trump-esque White House is asking Americans to voluntarily sign a “patriot’s” pledge – but afraid to hit the obviously ugly punchline, The Oath (Age of Irony alert!) falls prey to the same weak-willed citizenry its satirizing.

In Barinholtz’s vision, the United States is neatly divided into three categories, embodied by one extended family gathered to celebrate Thanksgiving in bland suburbia. There are those disgusted by the country’s nationalism (Barinholtz’s lead character Chris, an aggressively progressive family man who can’t stop falling for lib-baiting fake news); those who relish this opportunity to unleash their inner fascist (Chris’s brother Pat, played by Barinholtz’s actual brother Jon); and those who would rather think about anything else (Chris’s wife Kai, played by Tiffany Haddish with an intriguing against-type air of quiet desperation).

As written and directed by Barinholtz – a welcome supporting player across television and film, thanks to his just-sorta-really-off presence –The Oath appears to crave several things at once, all diametrically opposed. At various points, it savages those who blindly worship at the altar of Trump. At others, it simply shouts that divisions of any sort are ultimately unnecessary and manufactured. Most of all, though, it comes off as unsure, even afraid, of just what it wants to say about America today, resulting in a sometimes amusing, sometimes stilted lecture that indicts everyone, and no one.

If there’s a moment in which Barinholtz lets slip control of whatever message he’s trying to wrangle, it’s the film’s final third. After an hour of stage-y, but muted, arguments between members of Chris’s family, two federal agents (Billy Magnussen’s hot head and John Cho’s mellow pragmatist) stop by the household with clearly dubious intentions. Instead of embracing the scenario’s inherent insanity – one we’re inches away from living – Barinholtz tries to meekly meet expectations in the middle. Matters spin only mildly out of control, watering down whatever fire fuelled Barinholtz to put pen to paper in the first place.

Just as it is impossible to predict the death of one type of art, there is no way to foresee the birth of a great new form. The next two (or six, or who knows how many) years may see the creation of an explicitly political, perfect piece of here-and-now art. But be wary of anyone blindly loyal to such a pledge.

The Oath opens Oct. 19 in Toronto, Montreal and Vancouver. 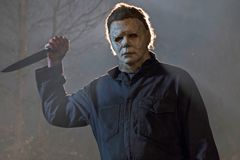 Film Review
Review: Studio 54 is a nightclub documentary for the non-judgmental
October 11, 2018 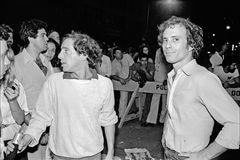 Film Review
Review: Bigger doesn’t do the heavy-lifting required for this ‘grandfathers of fitness’ biopic
October 11, 2018 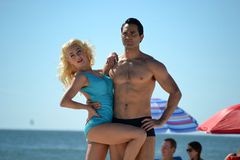