Where to even begin with Venom, a film that had me laughing at it so hard I started crying. A horribly scripted film so bad as to be enjoyable, but not bad enough to be good.

Perhaps the problems begin with studio Sony’s insistence that Venom is indeed part of Disney’s Marvel Cinematic Universe, home of the titular character’s nemesis, Spider-Man. Such vaguely gestured-to connections are at the heart of Ruben Fleischer’s ill-formed superhero outing; the film seems content to point toward a shadow of an idea rather than offer any considered narrative sustenance of its own making. Venom is more a collection of scenes serving almost entirely as trailer-bait than it is any kind of developed story.

The ever-affable Tom Hardy stars as Eddie Brock, an investigative journalist hell-bent on exposing the fatal human testing led by bioengineering giant Life Foundation and its villainous billionaire leader, Carlton Drake (Riz Ahmed). During a break-in at Drake’s laboratory, Eddie finds himself made host to what the Life Foundation scientists refer to as a symbiote – an alien life form farmed by the company in order to construct an alien-human hybrid species through the use of involuntary, impoverished test subjects.

Enter, Venom: a deadly alien entity who speaks to Hardy in asides, and has a taste for raw meat and an unfortunate complex about being less strong and generally less impressive than his fellow alien comrades.

Even without Venom using him as host, Brock’s character is truly a relic of its source material’s time, inasmuch as having a white male character be held responsible for his actions somehow seems to warrant extreme sympathy in the year 2018. It’s akin to watching an overly confident teenage boy barrel around onscreen. Brock returns to the phrase “there’s no such thing as can’t" several times in the film, in a move clearly intended to be imparted as bad-ass machismo, but which comes off as just plain obnoxious.

The film sets up Brock as the ultimate everyman anti-hero. He is fired from his job for going against his boss’s wishes; he is dumped by his girlfriend, Anne (Michelle Williams, who deserves better in all ways), for invading her privacy and getting her fired in the process. With all its insistence on moralism and conquering wrongdoers with superpowered good Samaritans, Venom never seems to question the fact that maybe Eddie is just an immature jerk who deserves exactly what he got.

Its insistence on this brand of heroism is further problematic when you consider the fact that all of Venom’s villains are people of colour and all its heroes are white. Ahmed’s Elon Musk-gone-badder Drake is positioned as a heartless billionaire intent on colonizing space for the rich and using the poor, and mostly white, to do it. Jenny Slate’s Dr. Firth is the heroic whistle-blower who becomes a helpless martyr for her new-found good intentions. Michelle Lee plays Donna Diego, who becomes a victim of Drake’s symbiotes after a spaceship crashes in Malaysia. Diego lurches across the screen, menacing her fellow, unsubtitled, Malaysian city-dwellers, sparing only an older woman who is later seen, in a particularly transparent move, threateningly approaching a lily-white little girl (with pigtails, for God’s sake). Even Brock’s boss, a black man, is positioned as an obstacle rather than any kind of ally.

Venom’s pandering to whiteness, particularly to those who are both white and poor and maybe even feeling forgotten or victimized in some way by the state of society in 2018, is obvious in its machinations. Indeed, that’s what will most likely draw swaths of people to see the film and enjoy it in the way it was intended. (Hey, it worked for Trump.)

And despite Hardy’s failed-yet-charming attempt at comedy (and an American accent), the ill-advised buddy dynamic between Brock and Venom, a comedically sexualized Lady Venom in the form of Anne, and visual effects straight out of 1998, that pandering is also what keeps this from being an entirely successful Bad Film.

For all of its cult potential (and my God, is this film rife with it), it is Venom’s insidious political intonations, which were entirely avoidable, that become the least palatable aspect of the film. And this is a movie where you see Tom Hardy eat out of a garbage can.

Film Review
Review: My Generation is a glimpse into 1960s pop-culture rebellion
September 28, 2018 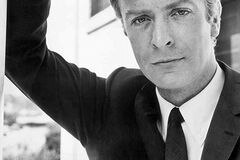 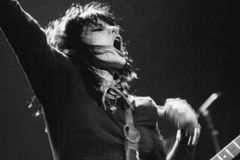 Film Review
Review: Night School has a mess of a plot, rife with short cuts and lazy storytelling
September 27, 2018 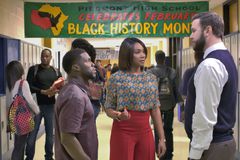