In Robert Lepage’s much celebrated production of Coriolanus, there’s a scene where the title character is banished from Rome and flees into the night in a silver sports car. On stage at the Stratford Festival last year, the effect was achieved with video projections of a dark forest rushing by; the car itself was actually stationary.

So, how does that look when you record it on film, a medium where a fleeing car can be tracked in full motion? Amusingly ironic seems to be the best description as Stratford unveils the most recent of its films based on its Shakespearean productions.

This ongoing series, which should eventually include every play William Shakespeare wrote, is mainly a faithful and tasteful record of the stage shows, with some delicate use of close-ups and panning. However, Lepage’s high-tech, visual production was very different from Stratford’s text-based standard, which tends to boast lavish costumes but more minimal sets and technical effects. Instead, the Quebec director featured projected scenery and some live video, and continually deployed magical devices for framing and changing scenes. Sliding black panels would glide away to reveal the action, or close in on themselves to cut it off. In short, Coriolanus was cinematic, so it’s intriguing to consider how it now looks on film.

Sometimes, the translation is merely distracting. There’s a scene in which Coriolanus’s mother and wife, played by Lucy Peacock and Alexis Gordon, are embroidering a wall hanging: A hint of the patterned tapestry is projected onto a transparent scrim in front of them as they sew at eye level. On stage, the effect was delicately domestic, veiling the women behind their work; on film, it mainly appears as some digital fuzz between the viewer and the action.

On the other hand, Lepage’s cinematic sense of framing and cutting can be heightened by film. He staged scenes amidst the Roman politicians – whose offices look like the quarters of Parliament Hill backbenchers – in a pair of cubbyholes. One little box was home to the two tribunes, played by Stephen Ouimette and Tom Rooney, whose direct appeal to the people brings down the newly appointed consul, the grumpy and reluctant Coriolanus created by André Sills. He was located in the office next door and, in one scene, he stood with his back to the wall, while on the other side Rooney’s tribune just happened to be playing darts. Visually, he was stabbing Coriolanus in the back.

Producer and director Barry Avrich, who oversees the Stratford film project, underlines the juxtaposition on film, emphasizing the dual focus between the two rooms in a way that harks back to the split-screen effects of vintage TV and film. Similarly, Lepage’s use of sliding black screens to create the equivalent of dissolves or iris shots (a favourite old-movie device whereby the action is blacked out by a tightening circle) seems rather sly in this new context.

Of course, Lepage does not draw his technological inspiration merely from classic film but also from contemporary culture. Audiences were particularly delighted by a scene in which two soldiers exchange information via text message, the bubbles with their Shakespearean lines appearing on a screen above their heads. (You can hear the crowd’s laughter on the soundtrack – since the Stratford films are always shot live.)

Coriolanus is a play so stuffed with warnings against oligarchy, hero worship and mob rule, it might seem pertinent in any era, but its exposure of political hypocrisy does feel utterly of the text-messaging, social-media moment. In Lepage’s cast, you could almost name the Liberal bagman and spin master whom Tom McCamus so delightfully creates in the role of Coriolanus’s chief enabler, Menenius. And that would make Ouimette and Rooney’s earnestly bumbling tribunes members of the NDP. The three men’s barroom scenes, with a projection of classical Rome behind them and a floating countertop that can levitate out of sight at every scene change, are a highlight of both the stage play and the film, making the contemporary resonances of the political action crystal clear.

And yes, those go well beyond cozy Canadian politics. The tribunes’ inability to control the events they unleash recalls Brexit, while the play’s cynicism about political popularity could be applied to the United States. That doesn’t mean, however, that Sills has really fathomed the difficult figure of Coriolanus; in early scenes, he quickly captures the graceless military hero who has no need for political power, but the enraged figure who wrecks his revenge on Rome remains a mystery. As his mother, Peacock is so broad in her interruption of the character’s ambition that she reduces Volumnia to a comic figure, a meddling mother who is still getting laughs late in the tragic action.

Film actually makes the relevance of these characters easier to judge because it makes them easier to see: It allows for close-ups – and, in particular, close-ups in scenes in which Lepage’s special effects required such dim lighting one could barely discern the actors’ faces. One figure who comes more sharply into focus is that of Graham Abbey’s Aufidius, Coriolanus’s enemy. Taking his cues from the sexual imagery of the text, Lepage judges Aufidius’s sudden embrace of his nemesis to be homoerotic, an interpretation that does much to smooth the play’s implausible end.

As Abbey’s muscular warrior emerges from a room where he has spent the night with one of his soldiers to sit on the window sill of his bombed-out palace, the projected setting is as convincing on screen as it was on stage. Here, performance and technology dovetail impressively – in whatever medium you pick. 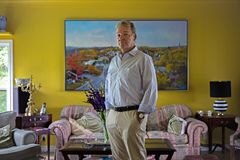 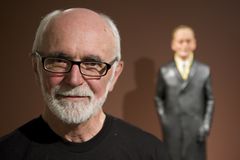 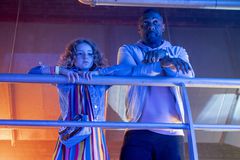