The next American auteur is not in Los Angeles, or in Brooklyn. She's not even American. Emily Kai Bock, unstoppable director of heart-pausing music videos, a Sundance documentary short, and much more soon, is a Toronto native who studied art at Emily Carr and film at Concordia and who still, at 29, lives in Montreal's Mile End.

"Although," she says, over the phone, "I haven't seen my roommate in six months." She sounds not so much tired as resigned to being tired. "Five? Six? What month is this, March?"

It is March, and Bock is calling from Nashville, where she's shooting a video for the dyslexically named duo Haerts. She favours a "run and gun" style, shooting with precision but not necessarily permission, in locations that feel plucked from memory, and with considerable speed. But that process belies how much forethought's in each frame – and thus, how insanely busy she is.

The first time I tried to interview her, in January, she was at the Sundance Film Festival in Utah, premiering the aforementioned seven-minute documentary on New York's new rap scene (called Spit Gold Under an Empire, it's now available to watch on her Vimeo channel). The next time, she was in L.A. shooting an ad campaign for denim brand Diesel. "We rented a huge set, which I'd never done, or been able to do," she says. "I'd never worked with a top art director, or had this – you know, this cushy existence in which to make something."

She could get used to it, if she wanted to. This month last year, Bock released her third music video, shot with $3,000 and 35mm film in two days. The "weekend art project" was just something she and her constant cinematographer, Evan Prosofsky, were doing for her old friend Claire. Of course, Claire is Claire Boucher, Claire Boucher is Grimes, and their stunning, unworldly video for Oblivion has been watched five-and-a-half million times. "That was a strange morning to wake up to," says Bock, who is not prone to hyperbole. "I was getting e-mails from people I would never have expected to see anything I made. It was all so fast."

Bock credits her subjects with her success, but she has never shot a music video that was not first and last her idea. Correlated: She has only been paid for one, and only at the band's insistence. (The band is Grizzly Bear, and her blue-lit, bildungsromantic video for Yet Again follows a high-school figure skater through the scintillating twists of a stress dream). When major labels approached, post-Oblivion, she backed away. Instead, she accepted choice commercial assignments, like the Diesel campaign; and that coruscating Coke Cap Dancing spot. "Doing commercials lets me do other things for free," she says, quite simply, "and when I do things for my friends, I want to do it for free. Even when I don't know the band before I shoot, which has only happened once or twice, we're friends after."

Indeed, no Canadian talent seems less afflicted by tall-poppy syndrome than Bock, who is adored by everyone I have ever met who's met her. On the phone, she sounds nice, but most people I interview sound nice. She sounds innocent of meanness.

"Emily sees the world differently," says her friend and ex-boyfriend Sebastian Cowan, founder of Arbutus Records. "It's like, maybe there's an underlying spiritual element that courses through all living things, and she is able to see that, and be in tune with that, in a way that most people can't. That allows her to bring out the beauty in what is often overlooked."

Cowan and his best friend were running a Montreal loft venue when, in 2008, Bock came to town. "He and I both met her, and we both fell in love with her," says Cowan. "Then, not entirely as a result of this, he committed suicide. A month later, she moved into the loft – well, you know, we had a spare room."

Bock knew how to fill a space. "I investigated every visual medium, from sculpture to print-making," she remembers, "as if I had to learn, like, all of art history by doing it." In 2009, she began setting performances to live music, then recording the performances, then editing.

"When I found film, everything I was trying to do made sense." She enrolled in film production at Concordia, but soon found that music videos are "better than school," which is why in 18 months she has done eight of them, or maybe 10, she forgets.

"Music videos have a budget – not for me to get paid, but for me to test ideas and techniques," she explains. "I don't have to go on Kickstarter or ask my parents for money to make a short film. I can do [a music video] every month, or two months, and every time I learn something new."

She also gets a new audience – or an audience, period, which is more than you can say for most Kickstarted student work.

When it's warm out, Bock plans to shoot a narrative that will be called her first short film, but will really be her ninth or maybe 11th. Many music videos are cinematic. Hers are like documentaries, faithful to the events of someone else's dream. In one year, her work has become immediately recognizable yet feels no less rare, which is why in another year, maybe two, her name will be on that cultish A-list of music video directors-cum-auteurs.

I want to know what her teenage favourite films were. She has to think. Later, she e-mails: "I didn't really watch a lot of movies when I was younger, [but] I do remember watching a lot of music. I remember thinking Daft Punk, Radiohead, and Foo Fighters had some of the most creative videos. It wasn't until later I learned [they were] the work of Spike Jonze, Michel Gondry, and Jonathan Glazer."

If the MTV generation had those guys, the Vevo generation will have – among others, but hardly anyone better – Emily Kai Bock. This isn't because she does the "edgiest" or most experimental work. Nor is it because she shoots a mood like she invented it, although yes, that.

It's because in her video for Sebastien Schuller's Nightlife, there is a legit Miami girl with her Barbie necklace and the kind of yellow-gold hair that always looks wet, a girl who looks too damaged to be famous. (Bock is uninterested in famous people; when I asked her to describe her ultimate fantasy music video, she said she would want to do one for an old song, like something by Woody Guthrie, or like, A Whiter Shade of Pale.) And because the Miami girl is on the Miami subway and all these Miami guys are checking her out, hard, and when the camera moves to her face, the girl doesn't see a thing. Her eyes are somewhere else. She looks like she's watching a movie, the most beautiful movie you've never seen. 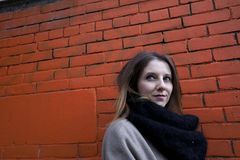 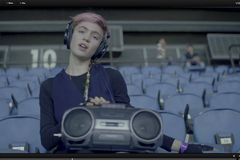 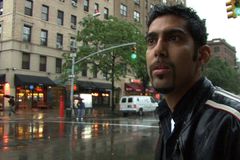 Claire Boucher as Grimes: the coolest girl in Canada
July 30, 2012 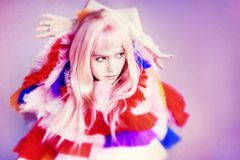