' You never feel as alive as when you're staring death in the face.' – ITN correspondent Jon Steele in Under Fire

Three and a half years (seven six-month tours of duty) was the maximum length of time any Canadian soldier could be assigned to Afghanistan during Canada's decade-long military involvement. An onerous commitment, to be sure, and dangerous, since it took almost 200 Canadian lives.

But another sobering fact is offered by Anthony Feinstein, who over 11 years has built a database on post-traumatic stress disorder (PTSD) and 350 "front-line journalists." On average, he said, "they have spent 15 years in war zones. Fifteen! A staggering statistic."

And it's a statistic with a monumental toll, as shown by Under Fire, a new documentary produced by Feinstein, a former medical officer with South Africa's apartheid-era security forces and now director of neuropsychiatry at Toronto' Sunnybrook Health Sciences Centre.

Written and directed by Toronto author/filmmaker/journalist Martyn Burke, who himself has seen combat in three wars (including Vietnam at 21), the film is a gut-churning look at nine combat correspondents. They include Canadian, American and British writers, photographers and TV reporters, and several of them Feinstein has counselled either in-person or on the telephone.

Under Fire hasn't had a major theatrical release, but that could change, as it's among 15 films vying to be one of the five finalists for best documentary at this year's Academy Awards Feb. 26. The five are to be announced next Tuesday"

To qualify for Oscar consideration, Burke and his wife/executive producer, Laura Morton, had to burn 30 DVDs, then ship them by mid-September to the Academy of Motion Picture Arts and Sciences for vetting by nominating committees. Another Academy requirement was for the film to have a brief theatrical run in either Los Angeles or New York before Nov. 14, when voting closed for the 15 semi-finalists. "Credit cards groaning under the weight of all this pushing of the envelope," Burke was able to book a theatre in Los Angeles for Nov. 11 (and one in New York in early December). The effort paid off: On Nov. 23, Under Fire was named, from a field of 124, one of the chosen 15.

It's a hard film to watch, with no triumph-of-the-human-spirit ending. To a man (and woman – there are two in the film, CBC's Susan Ormiston and Christina Lamb of The Sunday Times Magazine), Burke's crew are a haunted, hollowed-out, often guilt-ridden bunch, some more worse for wear – suicidal even – than others. Of course, not every correspondent ends up like the Ian Stewarts (Associated Press) and Paul Watsons (Toronto Star, Los Angeles Times) depicted here – but then not every correspondent has gone (or will go) to the lengths of, say, Chris Hedges, who for almost two decades hopped from conflict to conflict in El Salvador, Iraq, Bosnia, Kosovo and Argentina for The New York Times. Or Canadian photographer Finbarr O'Reilly, a major presence in Under Fire, who, at 40, has covered horrors in Afghanistan, Libya, Ivory Coast, Somalia and Congo.

While the psychological and emotional costs of war reporting have long been acknowledged, if not entirely understood or appreciated, the enterprise has become increasingly physically dangerous as well. Formerly a PRESS badge pinned to your camouflage shirt or taped to your car afforded the pretense, however illusory, of safety. No more: According to Under Fire, whereas only two correspondents were killed in the First World War, in just the past two decades, nearly 1,000 have died in the line of duty, 103 in 2011 alone, some of whom have cameos in the film.

Unsurprisingly, the acronym PTSD gets a good workout in Under Fire. And certainly the suffering presented in Under Fire is palpable . But as to why Burke's subjects feel compelled continuously to put themselves in harm's way, "none of them ever gave me a real answer that I could hold onto," he said. "There are all the answers that are true – that it's important, that it brings us news from places we need to know about, that there's an adrenalin high and more – but there's this unknowable personal component that's still floating around in the ether and has not been bottled and examined, and may never be."

On the red carpet at the Golden Globes
Gallery
January 15, 2012
New Oscar rules for documentaries a necessary improvement
January 9, 2012 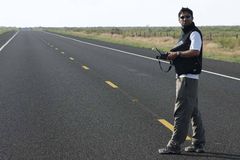 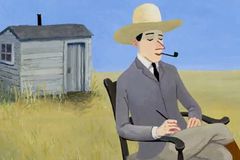