Miley Cyrus at Rogers Arena in Vancouver on Friday night

Okay, longevity may not be in the cards for Cyrus, but she is seizing this moment – the one she created by twerking into the spotlight ahead of a big album release and arena tour. Now she is giving it all she's got before it goes poof.

And she's doing it with a head-spinning spectacle of a show that even the most reluctant of audience members cannot help but find entertaining, as long – and this is important – as there are no children in tow.

Look, I acknowledge that I am way outside of Cyrus's target demographic. Listening to her music can make me jittery. Her tongue thing grosses me out. And I wish she would put some clothes on. Even recognizing that it's totally engineered, her behaviour I find to be immature and revolting. Lock up your daughters.

But here's the thing: her Bangerz tour, which kicked off in Vancouver on Friday night, while silly and goofy to the extreme, is bizarrely compelling; gloriously ridiculous in its over-the-top, non-stop party tricks – beginning with Cyrus's entrance, whooshing down a red tongue slide emerging from a giant projection of her face, and never stopping from there, with a contingent of dancers of all body types; enormous, arty, ever-changing video projections; a huge, strutting, red fuzzy puppet; a gigantic Siberian Husky; and yes, a flying hot dog – or, I suppose, banger.

This was a night of Bangerz and trash.

The skank factor was high – in the crowd (when did shorts get so short – and when did tweens start wearing leather bikini tops? In February?) and, no doubt related, onstage. There was copious twerking – on the stage floor, on the hood of a gold prop car, with the furry animal mascot dancers; near-nudity in some projections; and swearing – the first sentence out of Cyrus's mouth included the f-word. Class was not a word that came to mind. Ever.

Oh – the music. Material from Bangerz made up much of the set list, beginning with the high energy SMS (Bangerz), moving onto 4 x 4; Love, Money, Party; and later big hits We Can't Stop, and of course Wrecking Ball. Like the show overall, the vocal performance was at times more party than pretty – but it was good enough for an audience distracted by a whirlwind of crowd-pleasing antics. In an acoustic set performed near the back of the arena, Cyrus moved to covers – a Kumbaya version of Outkast's Hey Ya! (more like hey blah), followed by Dolly Parton's Jolene (solid, although I'm pretty sure Parton's version does not include the phrase "you stupid bitch").

Cyrus seems bound and determined to make Adore You a wedding dance staple. There was a bit where people in the audience were encouraged to kiss as they were projected onscreen inside a giant engagement ring. (Because it's not enough to have to see Miley's tongue all night.) The country influence hasn't disappeared completely amid the pop star razzle-dazzle – there was gingham, some square dance moves, and Cyrus's ever-present cowboy boots. She also donned a cowboy hat for the Party in the U.S.A. finale, which featured a dancing Statue of Liberty, Mount Rushmore, and Liberty Bell.

But the most profound duality of this enterprise mirrors Cyrus's own transitional point in life: desperately trying to be an in-your-face sexual provocateur while still stuck, even a teensy bit, in childhood. So Cyrus's sexy (well, to some) oral trademark becomes a playground apparatus. Later, sexually suggestive candy formations (really) projected behind the stage are indicative of an immature approach to sexuality. And then there's the inane hot dog sky-ride, as well as a truly juvenile number with dancing lighters and what appeared to be a boogying joint.

Cyrus – who has been working overtime to distance herself from her Disney past – is only 21; in an alternate universe, she'd be in college.

Instead, she's raking it in (we can assume) with this exercise in unstoppable raunch – and narcissism. Her face is everywhere – projected repeatedly and often in multiples on the huge screen behind the stage; all over the merch table; and even on the oversized t-shirt she wore for the acoustic set – her sparkly face on both the front and back.

The crowd ate it up.

Cyrus is a young woman making the most of her moment. And she's doing it with a splashy, take-no-prisoners, well executed show that will continue to get her noticed and please her fan base. The strategy is bang on. Mickey Mouse, this ain't. 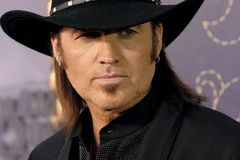 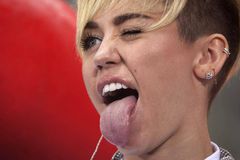 Miley Cyrus and other celebs weigh in with helpful life advice for Justin Bieber
January 31, 2014 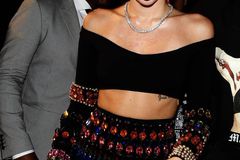 Miley Cyrus’s latest shocking, sexy video released a day early – and she is not pleased
December 26, 2013 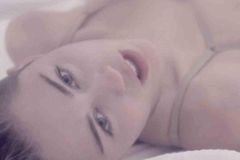