Years ago, I attended a flamenco festival in Seville, Spain, that included a brief set by a celebrated dancer known as Enrique "el Cojo" (literally, the Cripple). He came out in leg braces, danced only by moving his arms and left the stage to a storm of applause.

In most other dance performances, we see only the able-bodied, the fit and the well-trained. French choreographer Jérôme Bel included a few of those people in Gala, which opened at Montreal's Festival TransAmériques on Tuesday, but most of his cast were amateurs. Some had white hair, two were small children and one used a wheelchair.

The 19 participants were all recruited in Montreal for a show that unfolded as a series of tasks. A handwritten sign on a flip board would say "ballet" or "waltz" or "Michael Jackson," and each person in turn would offer his or her interpretation of what that meant. For "ballet," each person did a kind of pirouette and an approximation of a grand jeté. More important, they did it alone, on a stage, in a packed theatre.

The most touching of these gestures were the ones that bore the least resemblance, outwardly at least, to the assigned movement. The lower the skill level, the more we saw how a grand jeté appeared to that person as an idea, an aspiration or a feeling. The movement was a sign of something internal that was bigger and usually more beautiful. Watching the dream of a Viennese waltz as presented by an elderly man and a young woman who danced from her wheelchair in the fashion of Enrique "el Cojo" was the single most moving experience I've had at this year's FTA.

Though the means were different, the spirit of Gala was that of punk rock, in which passion and guts trump the ability to play well. But Bel's vision is of a whole society that believes this. The root meaning of "amateur" has to do with loving something, but the word is often used as a term of abuse. What if we all approached life like amateurs in a giant karaoke bar, in which the only important thing is to just go for it?

Parts of Gala were a kind of movement karaoke, in which one person would perform a solo and everyone else would do his or her best to dance along. That was truly the great leveller, as even the trained dancers struggled to copy the spontaneous movements of a small boy. One round middle-aged man included some flashy baton-twirling in his solo, which led to a hilarious storm of falling batons behind him.

The show mostly shunned professional values, abruptly cutting the recorded music whenever the given task had been completed. The costuming was a garish bit of everything, and the flip board was actually a recycled calendar turned to show the blank sides of the pages. With all local performers, no set and minimal lighting changes, this is a show that could tour almost as an e-mail-able file of instructions. Chiara Gallerani and Frédéric Seguette guided its restaging in Montreal, and the whole cast contributed to choreography and costumes.

The performance opened with a long and unnecessary slide show of theatres around the world, and ended with a full-tilt Broadway-style solo set to New York, New York, a real anthem of aspiration. But while the goal in the song is to become "top of the list, king of the hill," Gala just wants everyone to be and do what he or she can, without fear. What a beautiful idea.

FTA just announced another large "democratic" project to launch its 2017 edition, which will coincide with the 375th anniversary of the founding of Montreal. 100 per cent Montreal, devised by German company Rimini Protokoll, will attempt a dramatic representation of city as it is today, using 100 citizens, selected and coached over a period of nine months. The piece has already been seen in local variations in 25 other cities. 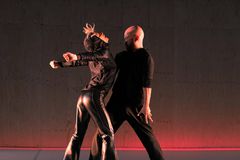 Theatre Review
The Ventriloquists Convention: Dummies with insight at Festival TransAmériques
May 31, 2016 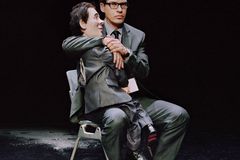 Une île flottante is a mad farce whose ridiculous characters cling to integrity
May 27, 2016 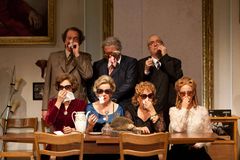