It's hard to fathom, but after nearly 40 years together, U2 still feels uncertainty about their musicianship, and performing live.

"That's what drives us," Larry Mullen Jr. told The Globe and Mail a few nights before launching their world tour in Vancouver. "We always want to be better. Let's get to the perfect gig. Let's make the perfect album. We never have."

"Craft is no substitute for magic," Bono chimed in. "And one of the problems for U2 in recent years is we were getting quite good. And craft – it's not our drug of choice."

On Thursday night, as U2 opened their iNNOCENCE + eXPERIENCE tour, there was craftsmanship – and there was magic. The results were intoxicating.

The band delivered an intimate arena show that combined back-to-basics U2 with exquisite use of technology; high-tech bells and whistles that wowed while never overwhelming the songs.

There were even hints of the punk rock that inspired the band early on – intentional or not. The Edge fell off the stage. Bono spat bottled water into the audience. The crowd ate it up.

"Look at you," said Bono, after asking that the house lights be turned up. "You haven't changed a bit."

The show was divided by theme – Innocence (including early singles such as Out of Control and I Will Follow) and Experience (including monster hits such as Desire and With or Without You).

It kicked off with The Miracle (Of Joey Ramone) from Songs of Innocence. The joyful, soaring opening notes announced that Bono was in fine voice (at least initially) and set the tone for a celebration of music, heroes and U2's history.

"We're a band from the Northside of Dublin," said Bono, inviting the crowd into the early U2 narrative.

Soon the band, which has been around the block, took a trip down memory lane – in a quite literal sense.

The show's set piece began with a tribute to Bono's mother, who died when he was 14. "This is for my mother, Iris," he said, before releasing the woeful wail from Pop 's Mofo – "Mother, am I still your son?" – minus the incongruously pounding electronic beat of the original. Then on the catwalk connecting the mainstage with a small stage at the other end of the arena, Bono sang Iris (Hold Me Close). It was powerful (although I could have done without the thumb-sucking).

What happened next, though, was mind-blowing: an enormous two-sided screen suspended over the catwalk came to life as Cedarwood Road, where Bono grew up, for the song of the same name. While Bono moved across a caged bridge suspended between the screen's two sides, it appeared as if he were moving down an animated street – complete with Irish telephone booths, cherry blossoms (referenced in the song) and other pertinent imagery.

The stunning sequence continued as the animation took us into Bono's childhood bedroom, with a teenage Bono (played by his son) on the bed, playing guitar, while Bono the elder sang Song for Someone, about his wife – his girlfriend back then.

This was followed by a spectacular acoustic version of Sunday Bloody Sunday. That went into Raised by Wolves, a new song about Ireland's Troubles – specifically a 1974 Dublin bombing. It was accompanied by news reports about the event and songs from the time (including the Canadian hit, Seasons in the Sun) – and punctuated with a loud blast. The band urged justice for the forgotten as photos of victims appeared on the large screen. So instead of the show slowing down, as it can when an older band unloads new material to a crowd possibly unfamiliar with it and definitely hungrier for the hits – the new songs stood out. Now perhaps fans who may have ignored, dismissed (or even deleted) Songs of Innocence initially may give it another shot.

After an interval featuring interview clips of musicians that inspired U2 (David Bowie, John Lennon, etc.) the band rocked the second act with hits such as Mysterious Ways and an angry Bullet the Blue Sky (with some altered lyrics, including mention of a cellphone – a rarity back in The Joshua Tree days).

There were a couple of minor missteps. Pride (In the Name of Love) had the place going nuts, but the energy generated was squandered when the band went into The Troubles from the new album. A crowd creeping ever closer to its bedtime sat down en masse, and the moment was lost.

Also Bono Vox seemed to be struggling with his voice at times in the second act – especially on Every Breaking Wave. But mostly, he lived up to the name.

He ended the show with some thank-yous – notably to Larry Mullen Jr., for his strength, following the death last weekend of his father. "We thank Larry Sr. also," said Bono.

He also thanked the crowd. "You, our audience, are the strength of this band."

The Edge lost his footing toward the end of I Still Haven't Found What I'm Looking For, the final song of the encore – and the audience filed out, having lost themselves, at least for a couple of thrilling hours, to a band that was probably part of their own formative experiences. It felt magnificent to be reminded of the power and possibility of music – when you are innocent, and hungry for experience.

Ahead of a tour that kicks off in Vancouver, U2 opens up about their ups and downs
May 13, 2015 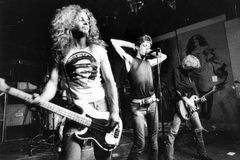