Serena Ryder is sitting in her backyard cottage of a home recording studio, reminiscing about her early-career cameo with a singing icon. It was nearly 10 years ago; she was 19, in braids and straight out of little Millbrook, Ont. The veteran promoter and music publicist Richard Flohil had brought her to Toronto's Silver Dollar Room to see the great soul-blues artist Bobby Blue Bland. "It's very important that you see this man," Flohil told her in his crisp, raspy English accent.

At one point, Bland, draped in a velvety, purple jumpsuit, turned his microphone to the audience for their participation. "I pushed my way to the front," Ryder recalls. "I thought to myself, 'sing loud,' and I could sing loud."

I was there, and I can attest to her volume. She sang so big and rich that some of us in the crowd figured her for a ringer – part of the show, had to be. But she wasn't. When Bland invited her on stage for a duet of T-Bone Walker's Stormy Monday, Ryder didn't know the words. The septuagenarian soulman fed her the lyrics, whispering into her ears as she sat on his knee. "I was terrified," she says with a laugh. "But he had this greatness to him. And everybody wants to be around greatness."

An idol in the making

Ryder recently released Harmony, the lushest, boldest album of her career – the record she's been destined to make. When one comes across a fully developed voice, it seems clear how the artist got there. But along the way, the path is never that obvious. Ryder, who turned pro before she was 10 years old (singing Peggy Lee-style classics and jazz standards with a pianist at legion halls and motels), has been poised for something akin to greatness for many years now. "That voice was there from the get-go," says Hawksley Workman, the musician who produced Ryder's breakout album Unlikely Emergency in 2004. "Her potential was in 3-D, and her voice has always lent itself to massive international appeal."

So far, the appeal has been denied. While Ryder has forged a highly respectable career in Canada, including three Juno awards, two gold albums and a healthy touring schedule, a bigger sort of stardom hasn't happened. However, with the new album and its highly successful first single, Stompa, wide-scale attention is beginning to be paid.

Getting to Harmony wasn't easy, though. Ryder suffered through a major bout of clinical depression before making the record. In what sounds like a cliché, the dusky-throated woman with the mountain-top voice had to hear herself first, perhaps fully for the first time ever, before others could listen to her at her very best.

"It was really dark, and it was really wrong," Ryder says in her Toronto studio, speaking about her depression. Formerly a two-car garage, the space is lined with unfinished cedar – "I'm a big fan of saunas," she says – and dappled with a farm girl's favourite fabric, burlap.

Ryder first began suffering from anxiety attacks while supporting her 2008 album Is it O.K. in the United States. Returning home, her condition worsened. Ryder's rock-bottom and her slow recovery was detailed in a recent issue of Chatelaine magazine. The short story is that she was treated for her debilitating illness, stopped worrying about who she was expected to be, fell in love and devoted herself to the craft of writing and recording music. "This album was totally my medicine," she says, all smiles. "The songs were conversations with myself, telling myself that I wasn't the depression. I began to understand music in a way I hadn't understood it before."

Post-depression, working in her studio every day, Ryder wrote more than 60 songs. But when she presented the material to her manager, she was told that the songs weren't good enough. "I think what I said to her was that I didn't think she was done yet," says Sandy Pandya, her long-time agent and friend. "She's an astounding singer, but I think in a lot of her past material she hadn't really explored that voice."

At first, Ryder was defensive. "I was emotionally invested in those songs," she explains. After it soaked in, she realized that her anger was a result of being told the truth: "I was all worked up because she was right. I didn't have the record."

That settled, Ryder travelled to Los Angeles to work with Jerrod Bettis, a musician-producer who worked with Adele on 21. He and Ryder hit it off immediately: She played him Stompa's hard riff, to which Bettis looped and added the infectious beat. The rallying, Black Keys-style fuzz-rocker took about two hours to come together. "I thought we were just playing around," Ryder says. "It was so fun and free."

A dozen other songs came just as easily and swiftly, including some with another producer, Jon Levine. As a whole, the record is as grand as anything she's ever done.

"I was in the moment," Ryder says of the sessions that resulted in Harmony. "For the first time in my life, I wasn't trying to be someone. I needed to enjoy who I was, and this record is all about that joy."

Serena Ryder rallies the glum, and other new music worth a listen
November 19, 2012 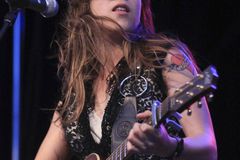 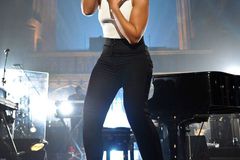