The man needed no introduction. He appeared on stage only, with no giant video screens to make him appear larger than he was. For reasons that are none of our business, he now plays electric piano (at nearly a professional level) instead of guitar. On his first song, You Ain't Going Nowhere, he asked "Are we gonna fly?" And in what way could that be answered, except to say, "You tell me, Bob Dylan, you tell me."

In his first Rolling Stone interview, in 1969, Dylan told the magazine that he didn't wish to be the subject of any fuss, explaining: "I don't want anybody to be hung up … especially over me, or anything I do." But we are hung up. There's nothing the 71-year-old Minnesotan can do about that. All he can do is not to get hung up on himself, and he's done a fine job of that.

The latest, absolutely first-rate album from the world's most praised songwriter is Tempest, a gritty, ambitious, light-footed and quotable piece of work. "I got something in my pocket make your eyeballs swim," he boasts, "I got dogs that'll tear you limb from limb."

I bet he does. Or maybe not at all. Dylan, who keeps us guessing, performed only one of the new album's 10 tracks at a three-quarters-filled Air Canada Centre. It is doubtful that anyone cared, or perhaps even noticed. Twitter action during the less-than-entertaining, rambling concert revealed a giddy mix of reverence and obliviousness: "I don't care if he's ancient and playing songs that I don't know, I'm watching BOB DYLAN right now," wrote one tweethead, who scratched the Dylan concert experience of the bucket list. "He's great, but if I'm being honest, I have absolutely no idea what he's saying, or even which guy on stage he is," was one another candid admission.

Dylan was the esophageal singer stage-right with a thick white stripe down the length of his pants, and who was more woogie than boogie on the black-and-white keys. The guy next to him for the concert's beginning (including Man in the Long Black Coat, Things Have Changed and Tangled Up in Blue) was Mark Knopfler, the opening act and high-priced sideman guitarist.

Dylan, no caterer to his audience, is dedicated only to unpredictability. As such, his players rarely committed hard to the material – they hung back, waiting for their man's next move, keeping their bayonets sheathed. Rehearsal would be a waste of time; the band members bluesily rolled, rattled and tumbled (sometimes with a southern rock feel) as best they could.

It all felt insignificant.

Things jelled noticeably on the down slope. On Ballad of a Thin Man, a reverb effect added drama to the phrasing of the suddenly perked up Dylan. "Because something is happening here," he sang, "but you don't know what it is, do you, Mister Jones?"

Like a Rolling Stone, which followed, was obligatory and sung in a mumbled blur. But All Along the Watchtower was new, weird and inspired, with Dylan idiosyncratically hitting single notes on his piano. Imagine Jimmy Durante with Derek and the Dominos.

The encore was a fiddled Blowin' in the Wind, and with it came another quiz from the enigmatic freewheeler: How does it feel, are we gonna fly, and now, how many times? Dylan, rightly, doesn't ask questions to which he knows the answers. He inquires. The rest is up to you. 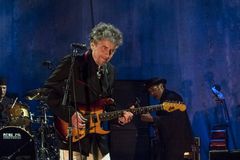