Singer and actor Brent Carver will stand on stage at Toronto's Harbourfront Centre Friday with the Art of Time Ensemble and sing the Beatles' song Honey Pie. It will be an unusual moment in an unusual career: The performer's occasional concert appearances often feature show tunes, folk songs or jazz numbers but seldom pop and rock. Yet Carver readily agreed on the song, suggested by Art of Time artistic director Andrew Burashko, because he likes these lyrics:

"She was a working girl/North of England way/Now she's hit the big time/In the U.S.A./And if she could only hear me/This is what I'd say/Honey pie you are making me crazy/I'm in love but I'm lazy/So won't you please come home."

"It's something to do with someone going somewhere," Carver observes, "… and someone is calling her back. Come on home."

Carver, who famously returned to a Canadian career after he won a Tony for his performance in Kiss of the Spider Woman on Broadway in 1993, wonders about the competing attractions of the bright lights and a nurturing home: "Can they be the same? Can they be fluid?" he asks during a phone interview from his home in Niagara-on-the-Lake, Ont.

Now 63, he certainly has sought that fluidity throughout his career, returning to Broadway occasionally but mainly basing himself in Ontario. He performs with Soulpepper in Toronto, where he did his last cabaret appearance in 2013, and at the Stratford Festival, where he won raves for his work as Pontius Pilate in Jesus Christ Superstar in 2011, but did not join the production's U.S. tour. His next gig is playing a character called the Antichrist in the R. Murray Schafer mega-opera Apocalypsis at Luminato in June.

For the Art of Time concert, apart from the Beatles tune, he will sing a few of his old favourites including Leonard Cohen's Take This Waltz and the 1929 popular Austrian song known in English as Just a Gigolo. They are the kind of bittersweet songs well-suited to his remarkable ability to lay bare the emotions behind lyrics and music, both acting and singing a number. Mainly though, he will sing songs that are new to his repertoire, such as Elton John's Oceans Away, a tribute to the veterans of an unspecified war. It's another song that appeals deeply to his reflective, stock-taking side.

The songs will all be arranged for an orchestra that is split between musicians from the classical and the popular traditions, and in that way, any Art of Time concert is an unusual moment. Carver is the latest in a series of popular singers who Burashko has featured in his songbook series, inviting them to choose a selection of favourite songs while pushing them to perform in a more complex musical setting than a rock band or musical theatre orchestra would ever offer.

"The arrangements are incredibly adventurous. They have to remain true to the boundaries of the song while really pushing it," Burashko says of the 13-year-old project, which has previously featured Sarah Slean, Gregory Hoskins and Steven Page, and will turn to indie rocker Hawksley Workman in 2016.

Art of Time, which is dedicated to making art music appeal to a crossover audience, is something of a showcase for the art of arrangement. Burashko subjects the popular music he includes on his eclectic programs to a fuller, classically inspired treatment including significant passages of solo instrumental work from the ensemble's classical players. Carver, he says, appreciated the approach.

"I've admired him for so long; I am really happy to be finally working with him," Burashko adds. "I think he is our greatest actor."

Carver, however, is typically understated about the talent he brings to the project.

"I guess I could sing When I'm Sixty-Four," he jokes. "I am grateful I can still work." 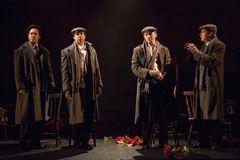 Glenn Gould retains his power to inspire in this theatre revival
August 27, 2014 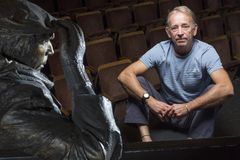