Two things you should know about internationally famous bass-baritone Luca Pisaroni, appearing next week in the Canadian Opera Company's production of Maometto II in Toronto. When he was 11, he heard his first opera. It was Aida. He knew then and there he wanted to be an opera singer. And, until he was in his late 20s, he was afraid of dogs.

The latter is significant because today, Pisaroni is almost as well known for his dogs as for his talent. Tristan, a dachshund, and Lenny, a golden retriever, travel everywhere with him and his wife, Catherine. They have their own Facebook page (3,100 likes); they regularly show up on Catherine's Instagram account. Last year, a woman stopped them on the streets of New York. "Oh my God," she squealed, Luca recalls, imitating her delight, "Lenny and Tristan! Lenny and Tristan!" Pisaroni's not sure if she knew who he was.

When Tristan was given an on-stage role last summer in Salzburg as the dog that Pisaroni's Count Almaviva takes for a walk at the beginning of The Marriage of Figaro, people lined up to meet him after the performance at the stage door. Tristan, that is. "They would say to me," Pisaroni recalls, "Oh yeah, nice performance – now where's the dog!"

Walking with Lenny, Tristan and Luca in Toronto's Liberty Village, it's easy to see the method in Pisaroni's madness. The world of an international opera star is difficult – often lonely, anxious and stressful.

"Everybody only sees the tip of the iceberg of this profession," Luca tells me. "They see you perform, accepting the applause at the end of the show, and they think, that's what it's like. They have no idea of the work and emotional toil the life can take."

Travelling with the dogs and with Catherine (a Web designer who can work from anywhere) allows the 40-year-old Pisaroni a portable home he can take with him wherever he goes. He needs to – he spent only 24 days last year in his ostensible home, Vienna. And one week of that was in performance. The dogs both calm him down and help him conserve his energy. "On a performance day, I go on two long walks with them," he says. "One before the show, to help me focus, one after to help me relax."

And Pisaroni needs his dogs to keep him relaxed, because he is one of the most sought-after singers of his generation, carving out an enviable reputation with the great Mozart bass-baritone roles (the Count and Figaro in Figaro, Don Giovanni and Leporello in Don Giovanni) as well as other repertoire, including Rossini, who he'll be singing in Toronto. But for all his bass-baritone success, he yearned to be a tenor.

"I'm Italian," he says, "Carlo Bergonzi grew up in my village, Pavarotti just down the road. Those great tenor roles, in Verdi and Puccini, are in my blood. But you can only be what your voice allows you to be. I never was a boy soprano, and by 13, my voice had changed into this lower register. It's been there ever since. But it helped me know what I wanted to do. Kids struggle to know who they are, what they want to do. I never had that. I was sure."

And it was Italy that also shaped Pisaroni's early attitude toward dogs. "We have a weird culture around dogs in Italy – very uneducated and hostile." It was only when Pisaroni met Catherine and her golden retriever, Lenny, that his latent dog-lover blossomed into being. "It was love at first sight," he says. When Lenny died suddenly in 2010, "it was like a part of my body was missing. Putting him down was the worst thing I've ever done in my life."

Within a month, both Luca and Catherine knew they wanted another golden, and got themselves a new puppy. "We struggled with a name, but then realized it had to be Lenny 2. It sounds weird, but sometimes I think Lenny 1 never died." The couple had bought a friend for the first Lenny a couple of years earlier, the dachshund Tristan. Now the tiny Tristan and hefty Lenny are inseparable. Although, as is obvious on our walk, the little one is clearly the boss.

The Pisaronis are in Toronto, husband, wife and dogs, because Luca's starring in the COC production of a rarely heard Rossini opera, Maometto II. It's a role he sang in 2012 with New Mexico's Santa Fe Opera, one of Rossini's most challenging creations, if basically unknown. "I remember drooling when I heard Sam Ramey sing this role in 1999, and I said to my father, who was with me, 'Oh, I wish I could sing that role some day.' But when Santa Fe called, at first I said, 'Oh no, there's no way, I cannot sing it. It's too difficult.' But I've managed. Dramatically, this is one of Rossini's greatest productions."

We're back at the Pisaronis' apartment hotel, and Tristan and Lenny are making the noisy acquaintance of a group of other dogs. Tristan can be quite a barker, Luca tells me. Luca's off to rehearsal, Tristan and Lenny are going to have a bath (you can see them on their Facebook page, not happy at all with the experience).

Luca Pisaroni's charm and ease and sunniness is obviously something natural with him, but he can also thank those four-legged companions for his positive demeanour. With Catherine at his side, they are his family, his support group and his biggest fans.

Maometto II runs April 29 to May 14 at the Four Seasons Centre in Toronto (coc.ca). 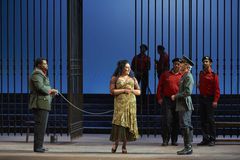 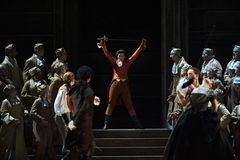 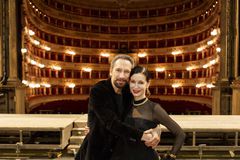