Most lyrics don't work alone on the page, nor should they. If words make a free-standing poetic statement, they usually don't need music, and often repel it. A good text for music is porous, receptive and incomplete.

Those are the rules, not because I say so but because music says so, most of the time. But why should text and music always mean singing? They don't in hip hop, or in the music of Laurie Anderson, who often constructs sound environments and then threads her words through them. Brian Eno's album-length collaboration with the poet Rick Holland is a project of that kind. It's music happening to poetry, music thinking about poetry.

Music is motion, and one interesting thing that tends to occur when spoken poetry is set against a moving ground of music is that the poetry slows down. It would drive you crazy to hear a poet go as slowly through a page of verse as some voices do on this album. But with Eno's thrumming vamps and dances running behind them, Holland's words don't need to hurry to the end of the line. They stretch out, leave gaps, and let you have time to take them in. That's good, because his poems lasso things from all over, from imaginary worlds and the ones we can see, and put those things together in a compressed space.

The Real does the slowing-down trick in two parts: first, with a woman's voice reciting at a somewhat leisurely pace, then with the voice harmonized through a vocoder and slowed down. A line like "describing the exact actuality" becomes, the second time round, a demonstration of its own idea. Each sound in the words comes out as a physical, musical event. The voice's robotic timbre sounds analytic, but it's also musically rich, with its shadow moving in octaves or other intervals. Eno's cloud-like soundscape twists and floats in the background, registering the passage of time while seem to make it stand still.

"Molecules are arranged, just loose enough to let the dreams through," an Italian-accented voice says in Pour It Out. The close contact between imaginative life and supposedly objective stuff like molecules is typical of Holland's verse. Dreambirds fantasizes about a parliamentary bill that would grant imaginative freedom to the young. The idea is both absurd and astute.

Some of Eno's music operates according to a wind-chime principle: tones that work in any combination strike against each other in ways that engage the ear without pushing in any particular direction. The vamp in Bless This Space sounds a bit like jazz, The Airman takes flight over a ground that resembles a large rumbling engine, and Sound Alien's rugged beats, gnarly keyboards and swinging horn samples make it the album's rockingest track.

Eno's instrumentals often bloom after the text is finished, most pointedly in A Title, which ends with an extended reedy vocalise. In the album's early going, the absence of vocal melody can feel like a deprivation, but there's melody of some kind in every track. In the last two numbers, tunefulness spills into the vocal line, and suddenly the "normal" thing - a voice singing a melodicized lyric - feels newly reinvented.

Eno's own voice appears in Dow, a late track in which the verse lines most closely approach the short-breathed span of pop lyrics. The bass-heavy music feels African, the text feels like a game: "money in the mix, you pick up sticks." But the whole has a speedy feeling of engagement with the ricochet effects of modern life, in which everything solid can be dissolved into ones and zeroes, figures on a screen, words and sounds.

Drums Between the Bells 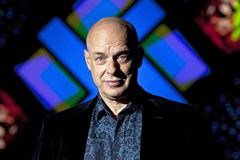