Heartbreaker, the song, is still kind of great, but it doesn't exist without the image. Later I would pretend the image didn't matter and stopped watching music videos on television (ew, TELEVISION) and only when everyone else stopped too – I guess in 2008, when MTV's Total Request Live (TRL) was cancelled and reality shows killed the video star – did I realize we had been idiots.

By now, anyone who's been to an unofficial after-party with a YouTube DJ knows that the death of the music video was widely misreported. What we lost was a far-away projected fantasy, whether it was Carey's heartbreakingly blingy good life or the Bunuel-ish night trip of Bjork's Bachelorette.

What we gained – with the multiplication of iProducts and cheap means of production – was a fantasy that slipped between our eyes and our fingertips and our pockets, was spliced with reality in deceptively simple ways, seemed suddenly more art than film. The Internet has rebirthed the art and practice of music-video making, rendering it as fragmentary and easy and weird as the Internet itself. Video art has its stars, or its YIBAs (Young Internet-Based Artists), from museum-approved Ryan Trecartin to rapidly emerging Petra Cortright.

Mostly, though, its virtual power has yet to be converted to hard cash. Music videos are selling the music, not the video, and so they're more viable, thriving and alive than ever.

Look at the new video directed by Emily Kai Bock for the single Oblivion by the Montreal bizarro pop star Grimes (a.k.a. Claire Boucher). In five days, the manic pixie masterpiece garnered some 346,000 YouTube views. If those views equalled record sales, it'd be triple-platinum. She now plans to make a video for every song on her new 12-track album. What would have been unthinkable and frankly stupid only five years ago is now, thanks to the accessibility, cheapness and ease of the technology, probably brilliant.

Toronto director Jose Lourenco made last year's Juno-nominated video for the band the Rural Alberta Advantage for $2,100. In October, some band called the Turnback claimed to have shot the first music video ever entirely on the iPhone 4S. And if I had a dollar for every time I've watched Gregg Araki's sublimely ridiculous, song-redeeming video for Rihanna's We Found Love, I could probably make it myself.

The point of today's most compelling music videos, in which both the means of production and the platforms for viewing are multi-screen technology, isn't to replicate big-budget fantasy. It's to reveal an actuality in which anything is possible. The distinctions between what we see and what we believe have collapsed so far, anyway, that M83's magicky video for Midnight City, in which children find themselves with convenient supernatural powers, seems practically realist.

Same for Youth Lagoon's July video: Everything is daydreamy and suburban and fine, until you realize it's also the apocalypse. If there is – knock on wood or something that looks like wood – another U.S. terrorist attack, most of us will see it first through an Instagram of a tweet on CNN, and we will have no idea whether it's real. Or rather, we'll have many ideas, and not know which to trust.

Exponential possibilities govern new (music) video art, and arguably no one exemplifies that better than CANADA, which in contemporary culture isn't a country (that would be silly), but a video-directing collective from Barcelona. Last year, they made viral-hit videos for bands El Guincho ( Bombay), Battles ( Ice Cream) and Scissor Sisters ( Invisible Light), and if you watched those, you know a Nicki Minaj collaboration can't be very far off.

Then there are the interactive music videos, which I think are either the latest fad or a new frontier. Last year, director Chris Milk's Google Maps-based video The Wilderness Downtown for Arcade Fire, and then a video-gamey one for Danger Mouse, were Internet sensations.

Last week, Brooklyn buzz band Chairlift released Met Before, a pretty rad choose-your-own-adventure video in which you control the narrative with right or left arrows.

"How would MTV host that?" asks Kai Bock, when I e-mail her about that Grimes video (which, why are you even reading this when you could be watching it? It's the most adorable). "It's safe to say that film via the Web will reach unknown heights. The Internet has changed everything about how media are produced and distributed, and now visual culture is shared, produced and reproduced so rapidly. Screens are embedded into our lifestyle." To close the loop, our "lifestyle" – no longer a gross aspirational euphemism, but a good expression of how inseparable the "real" (life) is from the "pretend" (style) – is better reflected on screens.

And there's where I begin to understand why all my favourite music videos feel not like shiny new worlds, but like real-time digital hallucinations, like falling down rabbit holes in the Web. Sound and image have dissolved into nearly one; so have reality and fantasy. We can't quite want to live in music videos any more. If we're on the Internet, we already are.

Note to readers This story has been updated to reflect the following correction: A video by Toronto director Jose Lourenco for the band Rural Alberta Advantage has been nominated for a Juno Award. Incorrect information appeared in an earlier version of this story. 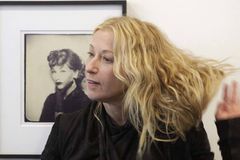