On the periphery of the ever-expanding cloud of horror that was the First World War were the women, left behind – often forgotten secondary victims, some of whom remained faithful to their fallen young loves right until their own deaths.

When Canadian playwright Stephen Massicotte began what would become the play Mary's Wedding – about one of those left-behind women and her young soldier love who goes off to war – he was influenced by a raging heartbreak of his own, as well as the stories of two women he had never met. There was a former girlfriend's aunt, never married, who had, since the Second World War, kept folded away in a box a pair of stockings given to her by her sweetheart who died in the war. He also read a newspaper article about a 91-year-old woman, who, in the final days of her life, clung to a signed picture of a young soldier named Billy, her girlhood love, who had died in the First World War.

"Those people never transmit their story because they tend to not have kids," said Massicotte on the line from New York, where he now lives. "So we forget all about them, because no one passes on that that occurred. We end up having grandparents that wear poppies and get us to go to Remembrance Day [ceremonies] That story is being passed on. But we don't know about all these people [who died]"

His play, which has had numerous productions across Canada and internationally since it premiered at Alberta Theatre Projects almost a decade ago, gets new life this week, with the world premiere of Mary's Wedding the opera – which Pacific Opera Victoria has spent three years developing.

The opera moves from the eve of Mary's wedding in 1920 back to meeting her first love, Charlie (Thomas Macleay), on the eve of the First World War. While dreaming, Mary (Betty Waynne Allison) recounts their time together, and Charlie's experiences of the war, which she has learned about through his letters, including his interactions with his sergeant, Gordon Flowerdew (Alain Coulombe), who is based on a real-life historical figure.

Things do not end well.

"When I first saw the play, big grown-up man like I am, I definitely shed tears," says composer Andrew Paul MacDonald. That sentiment is shared by the opera's director/dramaturge Michael Shamata (who remembers "bawling his eyes out," when he first read the play); by Massicotte (who wept as he wrote the thing); and by POV artistic director Timothy Vernon, who says, "I've seen two live performances and two professional readings and trust me, I've wept every time.

When contemplating a composer for the opera, Vernon couldn't get out of his head MacDonald's Violin Concerto, which Vernon had first heard years ago in a record store (and which won the 1995 Juno Award for best classical composition).

"In thinking and reading about this play, I found I was thinking back to that violin concerto," Vernon said, about his choice of MacDonald. "It was an instinctive thing."

He wasn't the only one operating on instinct.

"After a couple of readings [of the play's script] maybe it was the first reading, I started to hear tunes that came out of the lines immediately," MacDonald, who lives in Sherbrooke, said recently from Victoria. "That was kind of fun but also kind of scary, because I couldn't really stop it."

There are many firsts in this production: It is POV's first complete opera commission; MacDonald's first full-length opera; and Massicotte's first opera, period.

"I'm admittedly an opera neophyte," Massicotte says. "But I've been learning quite a lot through this experience. It's really cool discovering that an opera has less to do with a musical and more to do with a play. They're doing scenes, not songs."

For inspiration, there was history – much of it personal. MacDonald's great-uncle was a World War One flying ace who died after being shot down over France. Shamata's grandfather was a drummer in the war and for years he kept his granddad's drum and tambourine in his bedroom, along with photos of him in uniform. Vernon's maternal grandfather also served in the war and Vernon still has a pair of his binoculars from that time.

For the audience too, says Vernon, the story touches a core of shared interest and experience. "We've lost the generation now who were participants in that dreadful war," he says. "But there's hardly a Canadian family without memories of it in some form."

Lack of artistic courage hampers new opera about the Great War
May 3, 2018 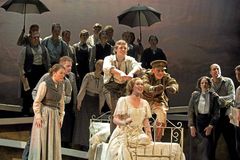