"Didn't anyone tell you it's new music tonight?" TSO music director Peter Oundjian asked with mock surprise as soon as he walked on stage.

He was addressing the large crowd that showed up at Roy Thomson Hall Saturday evening for the second concert in the TSO's New Creations Festival. Oundjian and the esteemed Hungarian composer-conductor Peter Eotvos took turns leading the orchestra.

If the audience's idea of new music was a strong dose of modernism – an evening of"difficult listening" music – then it got what it paid for. To be sure, this wasn't your grandmother's symphony concert.

The program opened with the Canadian premiere Con Brio, by the German composer Jorg Widmann. The composer, in the hall for the occasion, acknowledged the music of the classical period as an inspiration for this short concert overture. And indeed, there was a pronounced Beethovenian quality to Con Brio.

But this was Beethoven put through a blender. In Oundjian's hands, the piece lurched relentlessly forward – a mélange of halting harmonies and fractured phrases from the classical orchestral repertoire. Thrown together in this way, these musical ideas were reduced to a jumble of clichés. In effect, Widmann forced the audience to contemplate familiar musical ideas out of context and emptied of their meaning. The result was arresting, ingenious and even whimsical at times.

Eotvos, who is serving as guest curator for this year's New Creations Festival, stepped up to conduct the North American premiere of his Replica for viola and orchestra. With the composer on the podium, and TSO principal violist Teng Li as soloist, the piece could hardly have received a better performance.

It's the sort of new music that's often described as "challenging" – not merely atonal through and through, but also texturally complex and rhythmically diffuse. Yet thanks to Eotvos' mastery of his own style, he was able to bring an ever-changing variety to musical events as they unfolded. There was always something new and different to listen to.

Li emphasized the lyrical aspects of the solo part, giving a fluid performance that wove its way in and out of the constantly shifting orchestral colours. With her assured sense of direction, she made herself a kind of guide, leading the way through a strange and exotic musical landscape.

Replica was impressive, in its way – but ultimately the work's musical ideas proved elusive and inscrutable.

The most substantial piece on the program was also the newest: Canadian composer Derek Charke's Concerto for String Quartet and Orchestra, which received its world premiere in this concert, under Oundjian's baton.

The four string soloists were the Kronos Quartet, champions of contemporary classical music in all its diversity.

With this concerto, Charke staked out a vast sound-world as his musical territory. His horizons are very broad – encompassing not just the fragmented syntax of Widmann or the subtle timbres of Eotvos, but also familiar modal harmonies, a steady, danceable beat and even a dash of Hollywood film-score glitz. As if that weren't enough, there was also some shouting from the orchestra players, and prerecorded seals and narwhals from Nunavut.

Charke managed to pull all these materials together in a remarkably coherent way. However, there's so much going on in this big score that the poor Kronos players often found themselves swamped. Even with amplification, it wasn't always possible to hear what they were playing with so much visible effort. Only in a few passages, when the orchestra was scaled back or silenced altogether, did the quartet shine through.

Musician Peter Eotvos: 'Never give what the public asks'
February 29, 2012 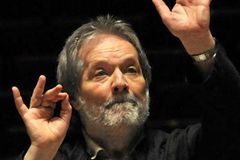