Lido Pimienta, an immigrant with no record deal, no marketing team and no physical copies of her winning album La Papessa even available for sale beat out a field of high-profile artists including Leslie Feist for the $50,000 Polaris Prize.

It was a highly unlikely win on Monday for the Colombian-Canadian artist, who also overcame the sentimentality associated with a short list of nominees that included a dead iconic Canadian (Leonard Cohen) and a terminally ill Canadian rock legend (Gord Downie).

Ms. Pimienta's album was funded by a $6,000 grant from the Ontario Arts Council. Its title translates to High Priestess, which is an indication of her sass and self-assurance. With an album of electronic Latin art-pop filled with empowering, socially conscious lyrics not sung in any of Canada's official languages, Ms. Pimienta was the darkest of dark horses, and an outsider most in the music industry never saw coming.

Speaking to The Globe and Mail hours after she captured the prestigious national music award, Ms. Pimienta was in a sour mood. A two-song Polaris performance the night before by the 30-year-old artist and her band at the Carlu event centre in Toronto was marred by sound issues. "I am a perfectionist," she explains. "It was heartbreaking to not be able to hear ourselves."

If Ms. Pimienta could not hear herself, an assembled group of media, music fans and industry professionals got an earful. After they heard her sing about sexism – "a stupid woman, an Indigenous women, a black woman" – they witnessed the musician audaciously express herself during an acceptance speech that seemed to be about anything but acceptance.

"Perhaps the only thing I can say is I hope that the Aryan specimen who told me to go back to my own country two weeks after I arrived in London, Ontario, Canada is watching this," said Ms. Pimienta, who immigrated to Canada in 2006 as a teenager.

A single mother, the Toronto-based artist used her speech to thank her son. She also thanked her mother for "enduring white supremacy in Canada."

Ms. Pimienta, who released her debut LP Color to little national acclaim in 2010, raged against Polaris organizers over the sound issues. Expletives during her speech were not deleted for the live CBC webcast.

The musician suggested to The Globe that her on-stage monitors may have been turned off deliberately by disgruntled sound technicians, upset by what could have been perceived by them as diva-like behaviour on her part.

"I honestly felt it was done out of spite and on purpose," said the musician, who had asked that a drum kit be removed from the stage to accommodate her 10 dancers. Polaris director and founder Steve Jordan has assured the musician that his team would never sabotage a performance. On Tuesday, Polaris officials were still looking into what led to the tech breakdown.

"My album is full of pain," Ms. Pimienta said. "This is my life, and this is what it is, and I was just going to project with all of the love in the world. I wasn't going to allow anything to stop my performance."

Stopping is not in Ms. Pimienta's DNA. Her songs are about struggle. Faulty equipment is just one more hurdle.

Her strong words at the gala recalled a similar incident in 2014, when Inuk throat singer Tanya Tagaq used her Polaris acceptance speech to controversially promote Indigenous seal hunting. On Monday, Ms. Tagaq, a nominee this year for her protest album Retribution, performed the Nirvana song Rape Me as a way to address the issue of missing and murdered indigenous women.

Though long perceived as a celebration of Canadian indie rock, Polaris has with its recent winners honoured a Haitian-Canadian DJ (Kaytranada, in 2016), a septuagenarian Cree folk singer (Buffy Sainte-Marie, in 2015) and the Nunavut-based Ms. Tagaq.

Other nominees for this year's prize included two albums (Mr. Downie's Secret Path and A Tribe Called Red's We are the Halluci Nation) about Canada's history of forced cultural assimilation and residential schools for Indigenous youth.

"It was super daring," says Ms. Pimienta, about the field of 10 short-listed albums. "Maybe we're getting to that point of looking beyond the plaid shirts and acoustic guitars and the songs that rhyme dumb words with other dumb words."

Ms. Pimienta has said La Papessa, which was influenced by the death of her brother and the illnesses of two close friends, is about "getting ready for war, with love." On the song La Capacidad (You Are Able To), she sings in her native tongue that she wasn't "born to fit into no hetero normative soap opera."

The song Agua addresses water rights. "It's about my family in northern Colombia," Ms. Pimienta said. "They're persecuted by the government. We've been deprived of running water, just like on the reservations in this country."

Her next album will be called Miss Colombia, a play on words referring to a fondness for her home country and the beauty-pageant culture of making music. "It's never easy with me," the musician says. "It's never black and white. But I'm okay with that. Being complicated is so much better than being basic." 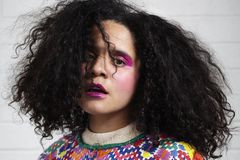 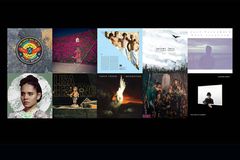 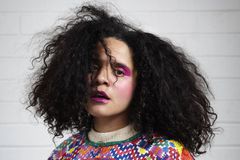