I wasn't expecting a call from the country music superstar so soon. Her publicist had warned me that Twain was running behind schedule, but the journalist ahead of me wasn't answering the phone. "So, we're moving forward," the singer says from the Bahamas. And indeed she is. After an eight-year break from performing live and a bout of romantic anguish – in 2008, her marriage with record producer Robert (Mutt) Lange fell apart, reportedly due to his infidelity – the newly remarried singer returned to the stage last December in Las Vegas, where her first run of performances of Shania: Still the One at Caesars Palace's ritzy Colosseum ran through June. She began another run Oct. 15, and more shows (Jan. 22 to Feb. 15) were announced this week. She talked to The Globe about new songs, fresh confidence, pressure, what impresses her and the tongue-wagging sexualization of Miley Cyrus.

We heard all about your new show when it opened, with the horses, motorcycles and sequined skintight outfits. But how did it go, for you, from the opening shows to the last shows of the initial run?

The show evolved for me, as a personal experience. I got more comfortable with the flow. Playing in the same room, concert after concert, was a big change for me. I came to enjoy it, though. There's no distractions, with the sound problems and the other technical issues involved with tearing down and building up a stage every night. You take away that distraction and you really feel more confident.

You needed that extra confidence?

Well, there's just less room for things to go wrong. So, you relax into what you do as a performer. A lot of the relaxing is the audience interaction, and getting to know the people. Everybody's closer to you. As time went on, I became more comfortable with that.

You've always had a bit of glamour and sex appeal to your stage persona. Do you have any thoughts on all the hubbub over Miley Cyrus? That she's selling sex as much as she is the music?

Some of the concern has to do with her age.

I smile at young artists being young, finding themselves. I think youth is beautiful. I think finding yourself is beautiful and very necessary.

There's also the idea that she's being pressured to market herself in this way. Did you ever feel that kind of pressure, to sex it up?

I was always comfortable with what I was doing. Looking back, I never felt pressure to exploit myself. And I remain comfortable with it today. It would be horrific, looking back 20 years later, as I am now, and feeling embarrassed at what I did. I would never want to set myself up for that.

Let's get back to what you're doing. You haven't put out an album of new material in more than a decade. What can you tell us about your batch of new songs?

I did a lot of songwriting during the creative process of the show development. I was in an artistic mode. Now that the show is flowing, it's time to get into the studio. The new songs are more intimate than they've ever been for me, and that will help in creating the sound that I want.

Previously you worked with your former husband Mutt Lange in the studio. Recently you mentioned Lana Del Rey's Born to Die and Raising Sand by Alison Krauss and Robert Plant, produced by T Bone Burnett. Is that the kind of sound you're after?

I've always been attracted to a drama in music. Those two albums are very different records, but they have a drama and a dynamic that my records haven't had. They have a rawness to them that I'd like to capture with my next album. So, we'll see.

I notice the song That Don't Impress Me Much is on your Vegas set list. You've been through a lot over the past few years, and now you're back. What impresses you these days? 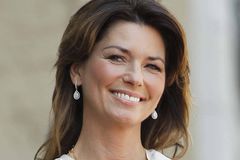 From gold records to a gold mine: It's curtains for Shania Twain shrine in Timmins, Ont.
January 10, 2013 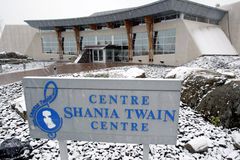 new
Shania Twain says she has compassion for accused in stalking case
September 29, 2011