With wins for group, pop album and single of the year — the skydive-thrilling "Closer," performed to perfection during the show with help from Toronto's Choir! Choir! Choir! — Calgary-reared twins Tegan and Sara managed a field-leading three wins, after having been shut out in five career nominations prior to this year.

The accolades came for "Heartthrob," a Ferrari-sleek reinvention of their punchy punk-pop that highlighted their ace songwriting. After what was considered a somewhat daring gambit, the Quin sisters were clearly elated at the overwhelming recognition.

"When we asked our parents if we could play music instead of go to university, they were really mad at us," said Tegan, 33. "And they agreed to let us do that for a couple years, and somewhere in all of that, we signed a record deal with Neil Young and Elliot Roberts. And Elliot Roberts told us that when we were in our 30s, we'd write good music but that our 20s were for exploring the world and experiencing heartbreak.

"And we are absolutely in our 30s. So I want to say thanks to everyone who has supported us from the time we were teenagers. I don't think very many people, certainly not us, thought two queer kids from northeast Calgary would get to here. And here we are. So thank you very much to each and everyone of you, thank you very much."

Still, the greatest honour of the night was reserved for Arcade Fire, whose difficult double-disc venture "Reflektor" mirrored their achievement of three years ago by claiming album of the year.

The Montreal rockers, who also took alternative album of the year, were off in Santiago, Chile at a Lollapalooza gig but managed to submit one of the evening's more interesting visual performances, a macabre pre-taped take on "Afterlife" delivered in lush monochrome.

After winning album of the year, frontman Win Butler and the rest of the group accepted the award in an outdoor pre-taped bit surrounded by a mariachi band.

"Hey, thank you guys so much," he said, swaying from side to side. "We really wanted to be there but we're in South America right now. Thank you so much for the Juno. We're so excited.

Although the show had three co-hosts — with East Coast rapper Classified and Scottish-born, Toronto-bred country crooner Johnny Reid eagerly sharing duties — Ryder seemed to shoulder the most responsibility to keep the show afloat.

With her husky roar, she opened the broadcast by convincingly mashing up her indie-pop gem "What I Wouldn't Do" with Classified's "Three Foot Tall" while a chorus of kids chimed in, then later filled the MTS Centre with the smoky torch tune "For You" (the telecast was given an appropriately dramatic sepia-toned filter for the occasion). Of course, she was amply rewarded for the effort, being named both artist and songwriter of the year — giving the 31-year-old an impressive six-Juno career haul.

If it's getting old at all, it didn't show in an exuberant speech that began by addressing her apparently sagging trousers.

"I lost a bit of weight because I stopped drinking for the Junos to be on point and my pants are falling down," she said as she first charged onstage. "Holy cow, I really didn't expect to win this but I'm so honoured. Thank you guys so much.

"I did want to say I come from a really small town: Millbrook, Ontario. When I was growing up there it was under a thousand people. And this has been a dream of mine my entire life. ... This is the hugest honour ever. This is the award that means so much to me."

She even somehow carved out time in her rambling speech for a non-sequitur defence of superstar rapscallion Justin Bieber, who was booed with vindictive gusto when the (absent) 20-year-old won his fourth straight Juno Fan Choice award.

"I really think that Justin Bieber is an amazing musician and he deserved every bit of that award because he's been working his ass off his entire life and we need to support how awesome he is," she said.

Ryder's diligent effort was necessary in a Juno Awards telecast that arguably lacked the star power of the annual gala's finest instalments.

In a year already missing appearances from the multiple-nominated likes of Michael Buble, Celine Dion, Drake and Arcade Fire — not to mention Bieber — the last-minute withdrawal of "Blurred Lines" singer Robin Thicke hurt. Thicke, who didn't win despite three nominations, has been cancelling shows recently due to an apparent vocal issue while also suffering through a high-profile split with wife Paula Patton.

Still, the broadcast was boosted by inventive performances from several blossoming acts.

With help from the Red Robe Women's Drum Society, sunshine-pop purveyors Walk Off the Earth — shut out in three nominated categories — executed a theatrical medley of kitchen-sink hits "Gang of Rhythm" and "Red Hands" with a visual panache reminiscent of their innovative YouTube videos. Meanwhile rock album of the year winner Matt Mays howled his blistering "Take it on Faith" and country trio Dean Brody, Brett Kissel and Gord Bamford's three-song run anchored the second half of the show.

And some capable vets also stopped by to buoy the proceedings. Sarah McLachlan plinked the piano for her airy new hymn "Beautiful Girl," while a star-studded tribute to Canadian Music Hall of Fame inductees Bachman-Turner Overdrive — which included Mays, Tim Hicks, the Sadies' Travis Good and the Sheepdogs pounding through open-road Canuck classics "Let it Ride" and "Takin' Care of Business" — closed the show on an appropriately emphatic note.

Although the four members inducted here — guitar wizard Randy Bachman, hale howler Fred Turner, guitarist Blair Thornton and drummer Robin (Robbie) Bachman — have spent significant time since their '70s heyday engaged in various squabbles, they stood together onstage to accept the honour and shared a four-way handshake at the end of their respective speeches.

"The four of us stand here and we took a ride around the world together that was quite incredible," Randy Bachman said. "It's great to be standing here tonight in Winnipeg where it all started. Everyone's had the same message here tonight: if you have a dream, stick to your dream. ... There is no Plan B; Plan B is stick to Plan A. Keep going. Aim for the sky. You might get there.

The night did feature some surprises, mainly centred on the marquee acts who didn't secure any trophies. Buble — last year's host, and an 11-time Juno winner who has thrice won album of the year — was shut out despite five nominations, Toronto rapper Drake triumphed in only the rap category, Dion came up empty-handed in her four categories (extending a winless streak that dates back to 1999) and Hedley was similarly 0-for-4.

On the other hand, Ottawa-area electronic pow wow trio A Tribe Called Red seemed stunned by their win for breakthrough group of the year — even though they were as qualified as any in the field — before delivering an eloquent speech in acceptance.

"I just wanted to say that to Native youth everywhere ... this moment right here is proof that whatever moments you strive for in life are completely attainable," said Ian (DJ NDN) Campeau. "So aim high."

Even Tegan and Sara — a dogged duo with 15-plus years of dedicated striving — succeeded to an extent that few might have predicted, including the siblings themselves.

The pair, whose past four albums have been certified gold, have a fanbase whose fervent passion is downright infamous. And they didn't forget it as they were elevated to the Junos' upper echelon.

"This award isn't about the very important people we're sitting with — our parents, our manger, our best friends — it's about you," Sara said after winning single of the year. "Canada has been supporting us since the '90s! Thank you so much. We love you as well, Winnipeg." 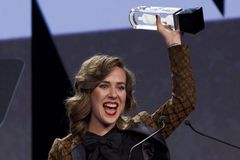 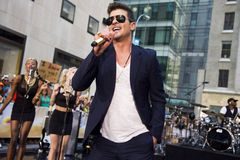 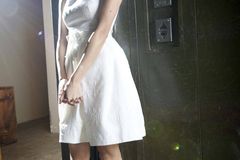 I performed with Tegan and Sara at the Junos: hours of work, seconds on the screen
March 31, 2014 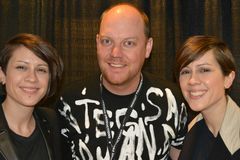